Rae134 said:
OMG Szark, if thats true what do I need a crazy mutt for? (well, except for cuddles, the crazy part I'll leave to my hubby )

LOL cuddles and crazy...nice balance.
Well for us (Christine and I) getting two new dogs after having a two year break from having dogs has perked us up no end, bringing us out of a mild depression. I call it a rut due to health issues. We are much better with than without and I hope it is the same for them.


Pendraia said:
@Szark, lol...that is too funny!
Click to expand...

When I told Christine of what you wrote and my response I got a swift Jethro head slap. But it was worth the laugh,

CV-BEE
She looks lovely Willow. I look forward to seeing your "older gent" when you find a pic of him to post.

Szark said:
When I told Christine of what you wrote and my response I got a swift Jethro head slap. But it was worth the laugh,
Click to expand...

Be thankful she didn't send you to the "naughty corner".

Contributing Artist
This is an older picture from 1977 showing Mom holding one of her "Babies", a White Faced Capuchin.
All total she owned 1 Spider monkey, 2 Cinnamon Capuchins, 1 White Faced Capuchin, 2 Marmosets, 2 Squirrel monkeys, 1 pig-tailed Macaque and 1 Stump Tailed Rhesus.
She got her first one when my sister bought one Squirrel monkey from a pet shop as a present.
She then bought the Rhesus, 3 months old, from a man who worked a carnival ans sat bragging how he used a stick and poked her in the rump for fun.
The Rhesus, Missy, became a big baby for mom but she sure gave me trouble....lol.
The Stump-tail came from a young man who said he needed a sitter for a few weeks and told us he rescued it from a university that was experimenting on it.
Claimed it was mixed with chimp and it may have been because he got bigger than any Stump-tail known.
The young man never returned for him.
The others all came from the Simian society of STL who got them from people who bought them as pets and did not know how to care for them.
Monkeys are not like other pets and need different care, they can be dangerous too. 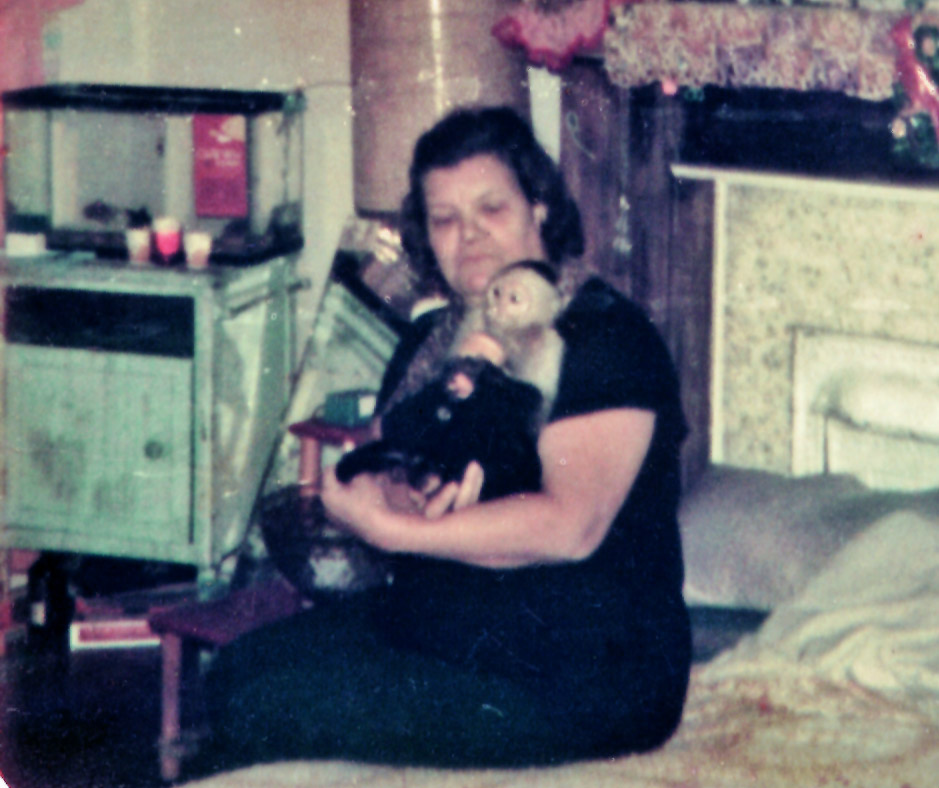 Faery_Light said:
Monkeys are not like other pets and need different care, they can be dangerous too.
View attachment 7950
Click to expand...

I bet they are. Truth be told they kinda scare me (I'm glad we aren't allowed to have them in Aus) They can be cute tho.

Over here it is illegal to keep wild animals as pets, so it always amazes me to see what people in other parts of the world considers pets

Contributing Artist
Unfortunately in the past pet shops were allowed to import and sell them.
They paid hunters to capture the young ones which were carried on the mother's back.
This meant shooting and killing the mothers.
Some were shipped in horrible conditions and many died on the way.
The Simian Society of STL fought for and won the banning of sales in Missouri pet shops.
The national simian society fought to ban the import and sale of any exotic animal for sale in pet shops and they won.
Some state still let people own a few exotic animals but more are banning them.
That includes certain snakes, alligators, crocodiles and the big cats, animals or birds that are not considered domestic.
This is why my mother ended up with so many, no laws at the time and people just did not know or care how to handle them.

Ah yes, it is always good to have some people who know how to care for exotic animals, there will always be those who get them illegally, and when they are caught on it, it is better to give them to someone who can give proper care, than having to put them down.

There are some people that get exceptions from the law, but they are under strict regulations. In recent years tho, there have been some relaxing on the rules regarding some lizards (until recently, it was illegal to keep lizards except for some certified people, but now you are allowed to keep certain species, provided they come from domestic breeding and not from the wild). You have to be careful not to let them escape tho, they won't survive our climate!

Contributing Artist
The pet shop where Mom bought her first monkey was bad at caring for any of the animals.
That is why she gave in an bought a little Marmoset, he was being mistreated and teased all the time.
One day some grown men were teasing a young spider monkey, poking a stick at it through the bars of it's tiny cage.
My temper (I do have a nasty one) flared and I made them stop and told them someone should lock them up and do them the same way.
The pet shop got so bad that one day Mom called the SPCA and they sent investigators out.
They found tiny cages crammed with dogs and puppies so bad the animals had no room to potty so they did it on each other.
No water or food had been provided and since no one knew it was an investigator, men were still teasing the poor animals.
That place was shut down in a hurry and the owner taken to court.
There is no excuse for mistreatment of any creature!

Faery_Light said:
There is no excuse for mistreatment of any creature!
Click to expand...

Contributing Artist
I was sitting in the front room earlier and Angel does her doggy trot to stand in front of me.
Her little stub of a tail wiggling as she stared me down.
I said "Okay, okay, I'll get one if you move out of the way".
She immediately trotted to the pantry door and waited.
She knows her treats are there and knew that I understood what she was asking for.

Szark said:
When I told Christine of what you wrote and my response I got a swift Jethro head slap. But it was worth the laugh,
Click to expand...

Certainly gave me a chuckle in a week I didn't have a lot to laugh at...

I remember going down to the creek with my brothers and catching lizards and frogs. I still remember the time my brother turned over a piece of corrugated tin and found a blue tongue lizard. He and his mate were too scared to pick it up so he threw his jacket over it to pick it up(very soft furry jacket no lizards were harmed). I often think today's kids miss out on these sort of experiences.

When my eldest was about two Mum and Dad took him and my little brother down to the creek and they caught a yabbie which they had in a tank for a while. It was interesting to watch how it changed colour the longer it was in the tank because the water at the creek was so dirty back then. Imagine my Mum's surprise when her yabbie had babies and there were literally hundreds of them in the tank. They took them back and released them into the creek but the kids had a fantastic experience watching this happen.

These days the creek is set up as a wetlands area and we can see lots of water birds. I used to take my younger children to feed the ducks...

I really like that so many wetlands are being saved (though not enough, in my opinion) all over the world. Wetlands used to be seen here as wasteland, were drained and turned into farmland and later often built on. But wetlands, whether marine or inland, are just teaming with wildlife and are not wasteland at all.

Miss B no naughty corner in the round house.

Pen I am glad I made you laugh and you can laugh at me anytime. Yabbies, yummm... lol

Faery_Light said:
There is no excuse for mistreatment of any creature!
Click to expand...

That a double amen from me too.

Contributing Artist
Thanks Pete...double yum...especially with some crispy bacon wrapped around them! I wouldn't have eaten ones from the creek but we had some friends who used to have a dam on their property where we did some yabbying! Not sure if I spelt that right...

I so miss freshly caught food. I can't catch fish here like I used to in NZ, can't hunt like I could in NZ....man I want to move back to NZ. LOL

That was so cruel Lorraine....