Contributing Artist
Hi Lyne, thanks for your comments. I don't normally leave photos up on the net generally it's because I'm a teacher and I like to be super careful about what I put up. It's one of the reasons you will never see me post a full nude also. It's not that I object to doing them but they can be misconstrued and photos can be manipulated.

I have been enjoying seeing the pictures of everybody's pets! They do become part of our families & hearts, I know. I waited until today to post a picture of my dog, Serena, because it is her Adoption Day! I got her from the Humane Society on April 12th, 2012. She appeared to be slightly less than a year old. I couldn't have asked for a more perfect & faithful companion. 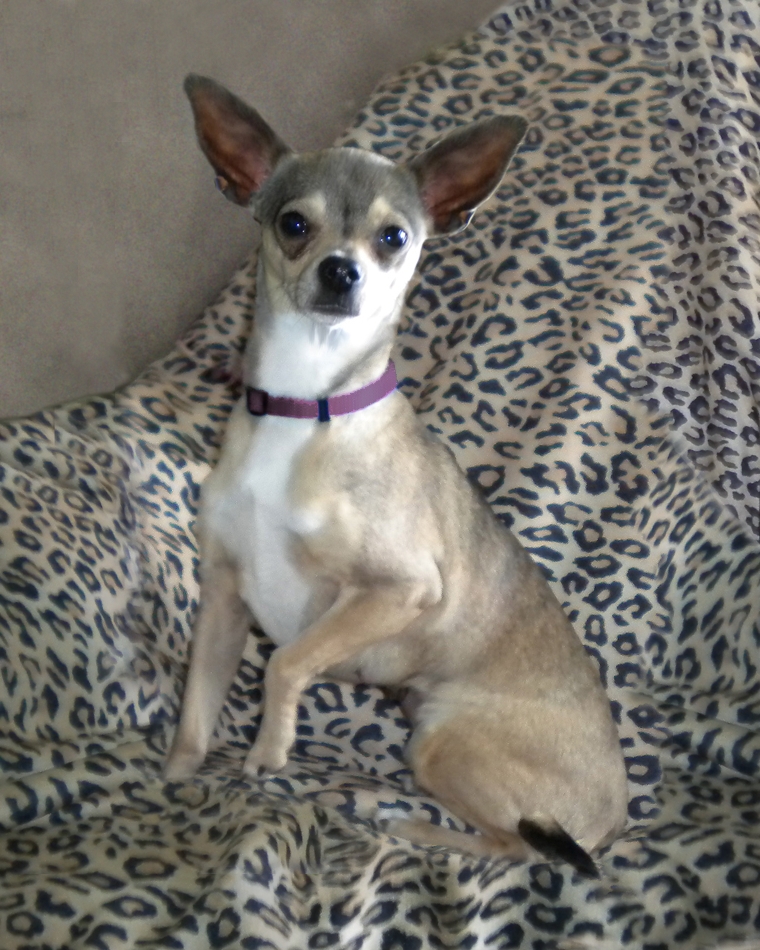 CV-BEE
Contributing Artist
What a cutie!

Tsuki is now six months old. She's lanky now rather than kittyish. Prowling on top of the kitchen cabinets, she rather looks like a cougar. Other than her adorable kitten face.

CV-BEE
What a sweetie Flint.

Contributing Artist
This is our "Angel" a Mini-pin.
She thinks she is human and a baby because she gets spoiled so much. 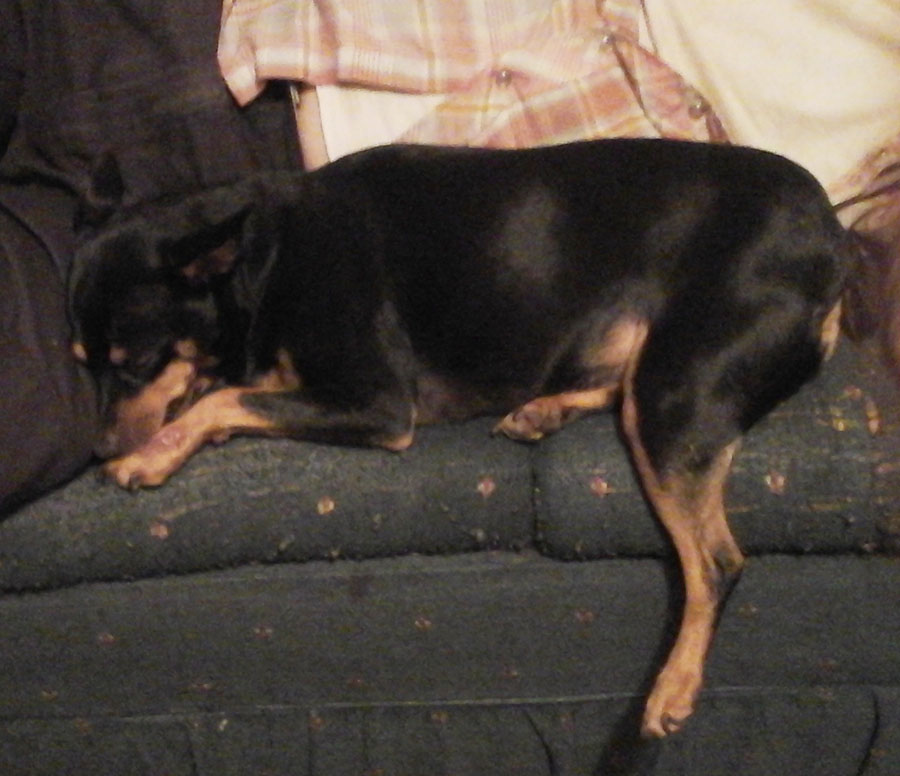 Oh she is a sweetie, Flint, what a cute wee face

I love min-pins, FL! And she is adorable

Contributing Artist
She loves to sit in the rocker-recliner with me or Paul.
Angel will sit up with her back against the chair back just like a human.
We give he little treats and she will sit, shake hands or give a "high five" for one.
My nephew and his wife bought her when she was a puppy but as she got a little older (not quite a year) they were tired of her.
To break her of chewing things or barking, they put a shock collar on her.
My nephew posted pictures where he was shocking her just for fun.
My mom asked for her because my brother wanted her but was still recovering from open heart surgery , and they gave her to us.
Later when we moved down here and he moved in with us, we all became her humans and I bought her a soft harness so she would never have to wear a collar.
I chewed my nephew out over that little stunt but he went right out and got another dog and put that collar on it.
Some people are beyond understanding!

Wow, HE needs the shock collar put on him! What a horrible thing to do, that's animal abuse

I'm so glad you rescued your Angel and gave her a much better set of humans who love her.

Lorraine said:
Wow, HE needs the shock collar put on him! What a horrible thing to do, that's animal abuse

Contributing Artist
Once she realized that she was ours and was never going to be mistreated again she settled down.
And as she grew out of the puppy stage her tendency to chew up stuff was over.
She still barks like crazy but that is something almost all small dogs do and it is hard to break them of it.
We just let her bark until she gets tired of it.

I can't remember a time when we didn't have some sort of pet (although Dad was not happy about it) in our house.
At some point in time we've had dogs, cats, pigeons, hamsters, guinea pigs, Mina birds and monkeys.
Not all at the same time, thank goodness.
Once Mom even had a pet Kingsnake.

Pendraia said:
Hi Lyne, thanks for your comments. I don't normally leave photos up on the net generally it's because I'm a teacher and I like to be super careful about what I put up. It's one of the reasons you will never see me post a full nude also. It's not that I object to doing them but they can be misconstrued and photos can be manipulated.
Click to expand...

you can always send them to me. LOL

Cesar said we usually get the dog we need not the one we want. That is so true for us.

Thanks for the comments!

CV-BEE
Contributing Artist
OMG Szark, if thats true what do I need a crazy mutt for? (well, except for cuddles, the crazy part I'll leave to my hubby )

Serena and Angel are cuties

Szark said:
you can always send them to me. LOL

Cesar said we usually get the dog we need not the one we want. That is so true for us.
Click to expand...

That explains why my daughters dog is such a happy little fellow but what about the paranoid one that my son has....

Here's my companion of all my adult life, sadly I had to put her down a year ago, and it still pains me She was almost 18, was diabetic and had stiff joints, suddenly a muscle or ligament in one of her shoulders were torn off and she lost all function of that limb. I decided it was time to let her go, as the chances of recovering from a surgery was slim. 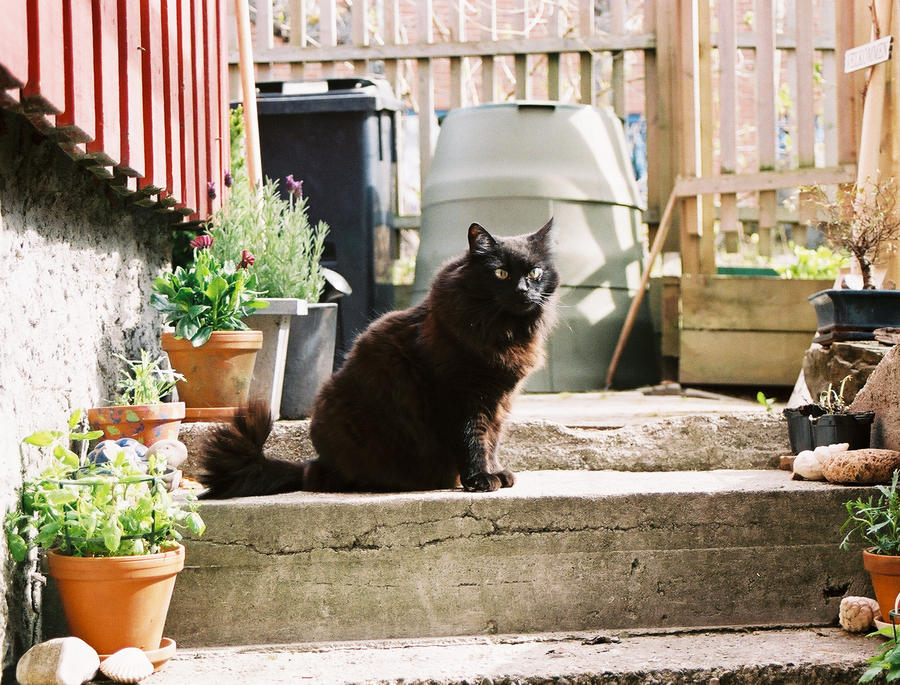 Since I'd been without a job and steady income for a while, I decided not to get a new cat as I wouldn't be able to take it to the vet when needed, and if you can't afford that, you should not have pets. Instead my sister pointed me to the local animal shelter, they needed someone to be permanent foster parents for an old cat that had moved between families way too many times and needed somewhere permanent for his old days. Since he would still be the property of the shelter, they would cover all expenses for him. We accepted him, and have not regretted it one bit

He has a bit of 'baggage' and can be a bit aggressive, but for the most part, he's a big soppy! And I mean BIG! Biggest cat I've ever seen, I think. According to the shelter papers, he's 16.. I don't believe it.. he likes to climb all the trees and run bananas through the garden, and has way too much energy to be 'an old gentleman' lol. I'll post a picture when I find one

I also had a betta once.. didn't live for very long tho, I think we had him for a little over a year - I'll look for pics of him too

CV-BEE
Contributing Artist
Aww Willowisp, she looks like a black lion with that ruff around her neck.

Love to see your other fur baby when you find pix.