VortigensBane said:
Was in a teasing sort of mood, so I took a break from working on contest entries to run a quick dynamic sim with the new noseband and reins. Poser, this time...View attachment 15072
Click to expand...

Howy2012 said:
I have been working on a set of trappings based on a Frazetta painting, and boy do I sympathize with you there!!!
View attachment 14329
Click to expand...

Oh Howy how I wants! Are you going to make it available?

Contributing Artist
Hey VB, have you picked up the latest dynamic plug in for DS yet? I was wondering how good it is?

@Pendraia By "latest" do you mean the $15 VirtualWorldDynamics DAZ Studio bridge? If so, no, although I did send a message to the developer to ask whether the bridge would support the Genesis 3 figures, which would be the main reason I would buy it.

Contributing Artist
I don't think the VWD supports specific figures, the figure it calculated on the spot and then the clothing.... Also your going to need the base program as the Bridge will not work on it's own. I bought both and haven't tried it as of yet as I need to double check and make sure I have things in the correct places. With Poser 11 there are like 3 areas I have content (Program Folder where I have all the Python stuff, My Library and then the default "Runtime" folder in the Local Users area.... ). Poor bridge will be as confused as me! lol

I did know that you need both, but until now I haven't tried it out. It's becoming very tempting, though, especially if it can handle the newest figures...

Contributing Artist
I just ran it using Dusk, no issues at all. It's fiddly though, as Ken from the DAZ forums noted. It's not going to be easy to figure all this out I'm afraid. The vids and info seemed easy and it is if your doing very draped items like curtains and what not but I'm into this for more realistic folds for clothing. The pants I just ran look OK but nothing great. The really really cool thing is that a parameters dial is created so you can create the strength you want. At about 49% I can see using this morph but the pants came away from the figure so need to figure out how to keep them tight to his body. 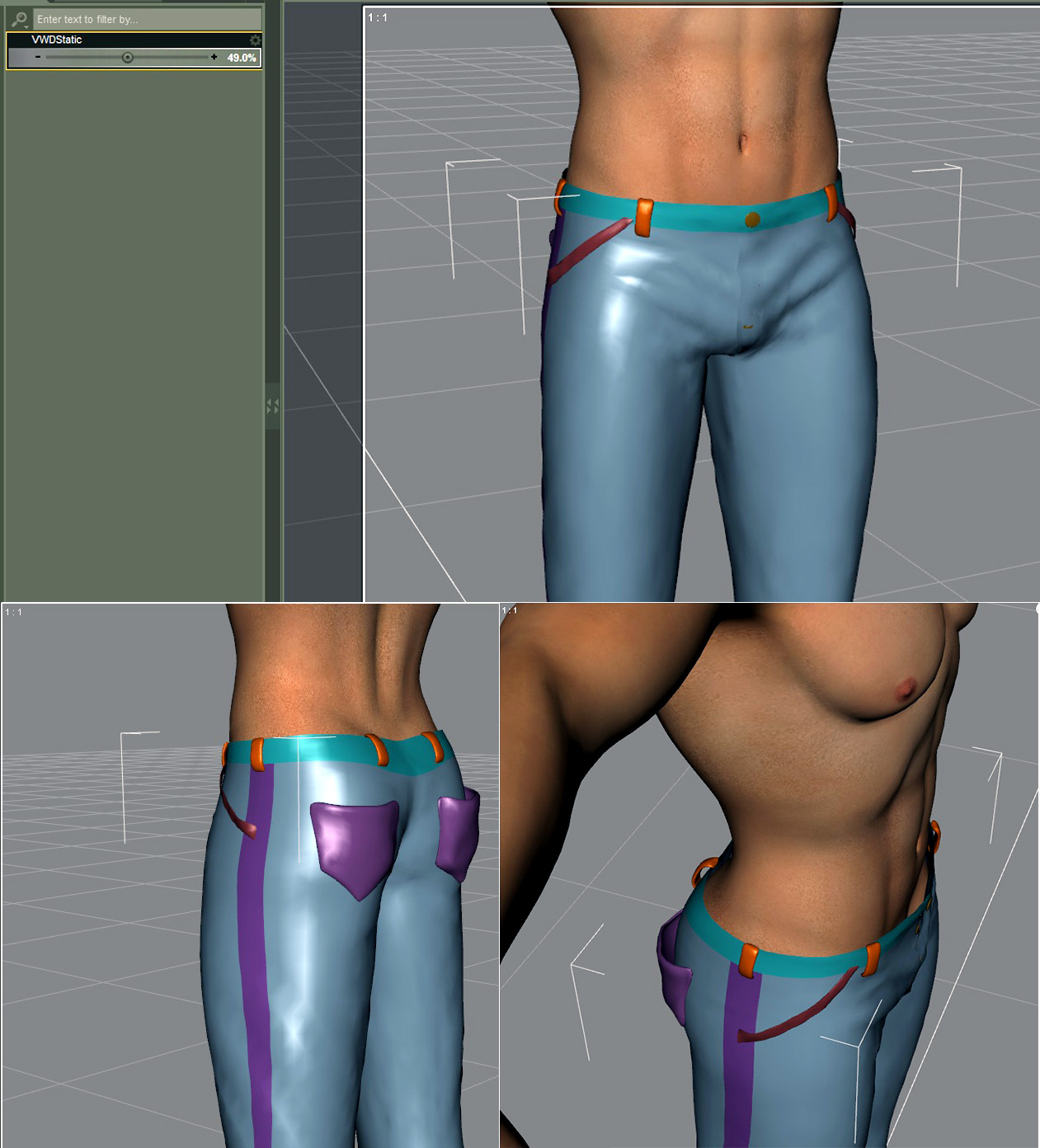 Nothing "great," but better than nothing...

I just broke down and bought it, actually, so we'll see how it works out. I don't know if I want it more for the hair, or for the clothes... 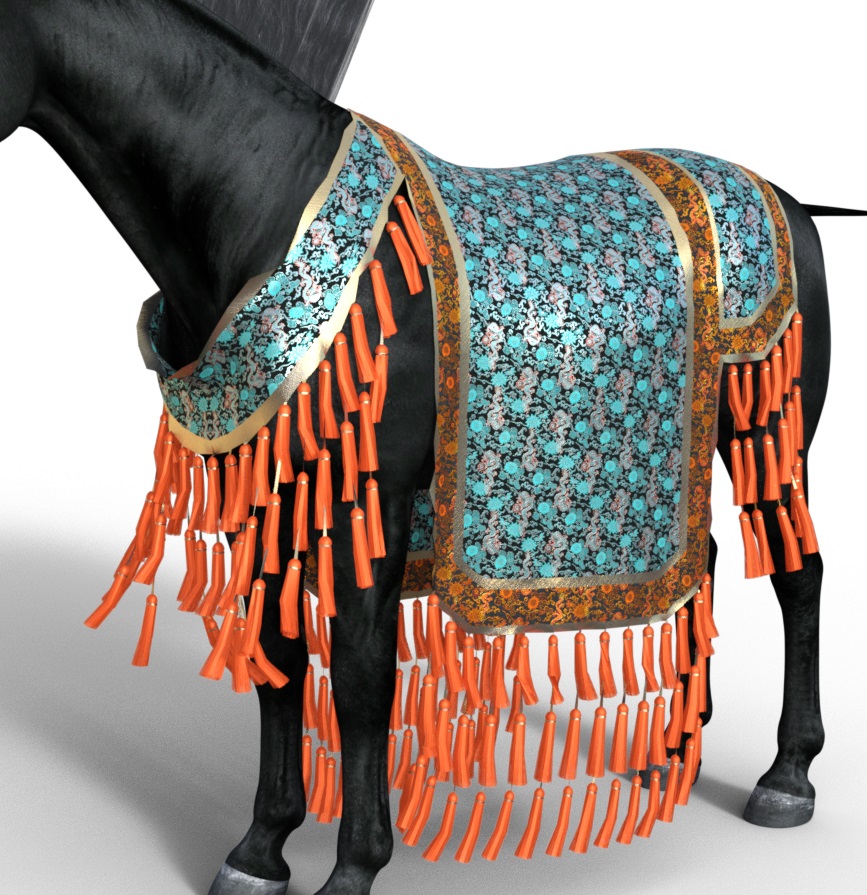 Just a quick test sim, no fancy parameter changes or anything like that. Should add a smoothing modifier, but other than that, I think it's a go. Sorry for the garish materials...

Contributing Artist
Where in the panel is the smoothing modifier? Or are you talking about DAZ Studio's?

Contributing Artist
Thanks for the info VB and Ram. I didn't realise you need both so I will need to investigate that further. Having just bought TD3 I have truly overspent and won't be buying anything else for a while so I have time to check it out. Please let me know how you go with it...

@RAMWolff I was talking about Studio's smoother; however, in reading (part of) the user's manual, it appears that there is some function in the script to raise the resolution of things so that they simulate better. Haven't found it yet, though...

@Pendraia I have had it for less than 24 hours, and already don't know what I ever did without it. Best $80 I ever spent on content. It allows you to drape CONFORMING clothing and hair, so you can pose your figure, morph and pose the cloth/hair, and then run the simulation. So now I can get some decent looking dresses, cloaks, and skirts, instead of the extremely clumsy morphs that come with the conforming clothing. There are some awesome video tutorials by "Biscuits" over on Renderosity, which explain the basics of how it all works, but you can even interact with the simulation mid-sim if it is not draping the way you want it. And, absolutely best of all, something which I have been hoping for forever, is that your figure can grab the cloth, lift it, and then drop it again!!!!!!!!!!!!!!

Contributing Artist
Only problem when using the built in res increase is that it triangulates your mesh so it's no longer your original mesh. The base mesh needs to be a medium density mesh. The really lightweight ones will not drape as nicely. My pants are a medium density. For today's systems it's fine. 10 years ago, that sort of density would have been a show stopper for allot of folks systems.

Contributing Artist
Sounds awesome VB...I will have to save my money for it! Triangulated meshes are supposed to drape better Ram. There was a long discussion on this a few years back on the old Daz forums. The mesh quality will impact for sure...

Contributing Artist
For me I can't have my mesh triangulated though hon, this would be used for a product I'm making to get more natural folds. Unless there is an algorithm that would return it to it's original quads and order which I highly doubt!

Pendraia said:
Triangulated meshes are supposed to drape better Ram. There was a long discussion on this a few years back on the old Daz forums.
Click to expand...

You know I've heard that too, but in my experience I often haven't found it to be true. Or rather I find it depends on how you want things to drape. I've tried meshes I've created both as quads and triangles (MD makes it mostly easy to switch between the two) and I often didn't like how triangulated meshes behaved. Although part of that is because I've found that it's much easier to adjust and clean up the meshes in Poser if they are quads, and I haven't found that I get enough benefit from triangular meshes to make it worth it.

Now when comparing to real fabric it's good to remember that most of the time, fabric really is closer to quads, although teeny tiny ones. Fabric is woven along a grid. However, often in things like evening gowns the fabric is turn 45 degrees so that it drapes differently, this is called a bias cut, and is closer to triangular meshes.

That may be the other reason I've tended towards quad meshes, so far the items I've made would not have been bias cut, so the folds look wrong to me when I triangulate it.

Contributing Artist
Yep...you're right fabric has it warp and weft threads so in a way is like quads. I wonder if tris wouldn't be better though for something that is imitating cutting on the bias like you described? I must admit that the tri meshes from MD didn't impress me but iirc it was a particular type of tri's that they were talking about. This thread went right into the technical stuff and most of it was over my head I must admit...

They're on mine too. If my poor computer didn't take so long to grind out each render (making it unusable for days on end), I might actually have something done. I'm now at 50% after 2 days...