VortigensBane said:
Was in a teasing sort of mood, so I took a break from working on contest entries to run a quick dynamic sim with the new noseband and reins. Poser, this time...View attachment 15072
Click to expand...

Howy2012 said:
I have been working on a set of trappings based on a Frazetta painting, and boy do I sympathize with you there!!!
View attachment 14329
Click to expand...

Nice, and being familiar with the reference image would hope this gets completed and made available.......someday!

VortigensBane said:
There have been too many fun contests recently... I've gotten a little side-tracked from modelling.

Right now, Rae, I am still stuck in Poser-only mode, since I haven't figured out a good way to make it drape convincingly in Studio. HOWEVER... I am looking at a new plug-in script on Renderosity which supposedly can turn a random prop into a DAZ dynamic object. Since I already spent too much this month, I'm waiting til next month to get it, but hopefully it will work out. That way I won't have to rig and add movement morphs to each tassel. The multiple layers option is a really good idea. I think (at this point, anyway) that it would be more efficient to have three separate props rather than to use trans maps to hide various levels of tassels, since otherwise you give Poser extra work to do for no purpose. However, when it comes to rigging, there is no way I would subject myself to all that extra work, so a rigged version would DEFINITELY use trans maps.

I had another thought, too, while I was doodling out my rough texture ideas for the blanket. Supposedly, the fewer UV maps your computer has to load (especially when there are four 4000x4000 images per texture), the faster the render time (it has something to do with the memory cache, I think). Soooooo.... I figured it might be a good idea to model a bridle that uses the same UV layout before going through and painting all my textures. Then a bunch of fun contests came up, and I got sidetracked... Right now I'm trying to finish entries for two different contests, but hopefully March will be a more productive month.

In the meantime, here is an photo of an old blanket that I am using for reference. I want my texture to be pretty much the same, but I'll probably do a gold option and a silver option, with various blanket colors besides red.
View attachment 3707
Click to expand...

Lovely reference images but also great ideas for Poser stuff renders.
It would be great to create and offer a complete set of items to use for all characters in this case horse and rider.
Wish more ideas were so well supported.

VortigensBane said:
Render time has never been a problem, but it was taking the cloth sim FOREVER to get from frame to frame. Yesterday I went back through and lowered the resolution of the tassel fringe. It was a night-and-day difference between the two models when it came to cloth simulation. The new model took less than 25 minutes to run a 30 frame simulation, and I can't notice a difference between the two models when I render. What is better, though, is I have figured out how to reduce the UV layout from two maps to one, by making all the tassel fronds share the same UV layout instead of all being different. That should make it easier to texture too. Anyway, here's the new model:
View attachment 2112
Again, the wind is blowing from the "East" still...
Click to expand...

Entire blanket with tassels is now down to 60,000-ish faces. Does that sound "normal-sized"? Render times have improved from 10+ minutes per frame to about 2 minutes per frame. I have included test renders in both "masculine" and "feminine" colors.

Work is beautiful.
Wish I could learn how to work with dynamic cloths.

Since I haven't updated here for positively ages, I decided to give it a go.

With the new dForce feature of Studio, I did a little practicing with my "Arabian" blanket, just to see if I could get it to work out. I had a few glitches, and even still there are some things to sort out, but I think there is a promising future for some of my extended projects reaching a release-able and useable state, within the next ten years... 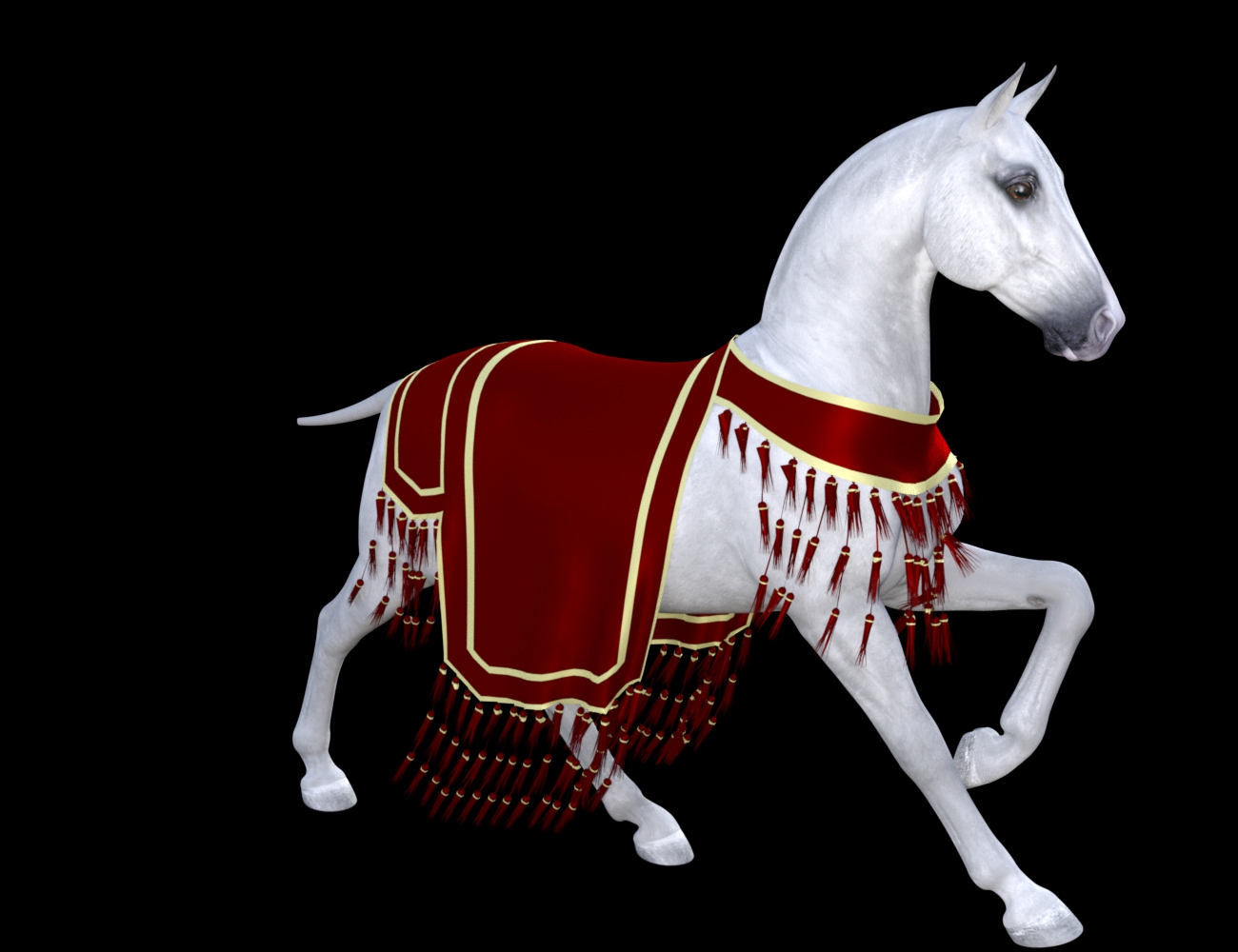 This was just a quick test, so I haven't added the mane and tail, since dForce stuff collides with everything in the scene, and the mane might have gotten in the way. You can seee there is some distortion of the tassels, especially up on the shoulder, but at least this time the simulation ran without "exploding" like Poser's cloth room does sometimes.

Contributing Artist
Very nice! Maybe you can designate those tassels as "static", as if they were "stiff" objects, like a button? Then they might not explode?

Still working on it a bit, I've been managing to even crash Studio a few times. The whole dForce stuff takes a bit to figure out, but if the tassel heads would react like buttons, that would solve all my problems. The part I am still working out is how to get them to stay stiff, without making them so rigid that they don't sway with the rest of the tassel strands. It's a bit more of an incentive to keep hammering away at it, now that there is a way to release it as a Studio compatible product that doesn't need any sort of add-on. Poser would be a bit easier, but I don't do Poser materials well. The Cloth Room is easy.

Contributing Artist
I've managed to crash DS using dforce and I've only tried once or twice...

Staff member
Co-Founder
Wow, wow, wow!! This is amazing. So very impressed with your talent. 10 years or not, still very cool.

Coming from the "Master," that means a lot. Thanks, Chris!

VortigensBane said:
Still working on it a bit, I've been managing to even crash Studio a few times. The whole dForce stuff takes a bit to figure out, but if the tassel heads would react like buttons, that would solve all my problems. The part I am still working out is how to get them to stay stiff, without making them so rigid that they don't sway with the rest of the tassel strands. It's a bit more of an incentive to keep hammering away at it, now that there is a way to release it as a Studio compatible product that doesn't need any sort of add-on. Poser would be a bit easier, but I don't do Poser materials well. The Cloth Room is easy.
Click to expand...

I think the easiest way to have the head of the tassels stiff would be if they were a different mat zone to the rest of the tassel, you would need the string of the tassel still movable so they swing (same with the tassels themselves) so would need to be separate material zones unless you wanted to go and weight-map all of them by hand

Contributing Artist
Hello! Poking you for a yearly update! You've been doing amazing work with LAMH, by the way.

CV-BEE
Contributing Artist
Did you get the dForce figured out?

Thanks for the "poke." Gives me a good reason to give it another shot. It was a really busy year at "real" work, so not much time for hobbying; I think I managed a total of five renders last year. I haven't even have time to build my new "super" rendering computer that I bought in pieces!

I did purchase some dForce clothing items which I will hopefully be able to reverse-engineer in order to get the tassels right, but from the things I have seen so far, I might have to alter the geometry a bit, and have the individual tassels parented to a "rigid follow" node, as the necklace pendant is for the pendants on several of the dForce items I have. So far, the tricky part is not getting just one tassel to behave, it is getting three tassels in a row to behave! Either the heads don't budge, or they collapse.

CV-BEE
Contributing Artist
I'm by no means an expert but I have gotten a few things to dForce that others haven't so if you want me to take a look at it, I'd be happy to
You must log in or register to reply here.
Share:
Facebook Twitter Reddit Pinterest Tumblr WhatsApp Email Link
Top