Contributing Artist
So I thought it was about time I put together a thread for the outfit I'm working on. 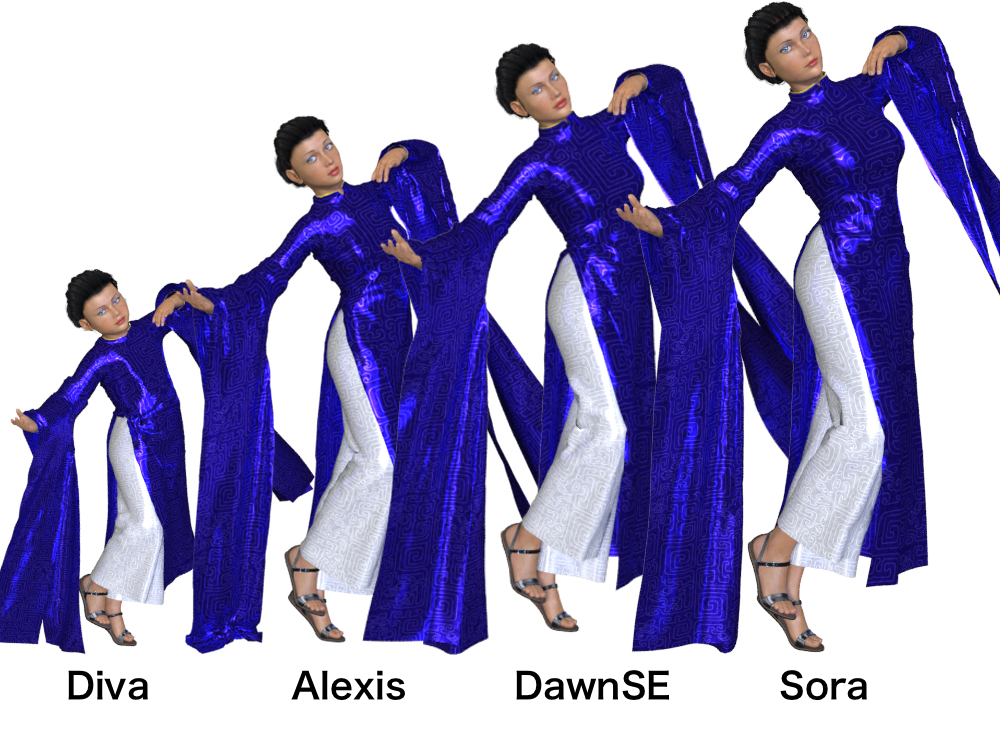 First go at matching morphs for Diva, Alexis, and Sora.
I haven't posted much on it recently, because I've been fiddling with lots of little bits to refine the morphs, and the textures. It will be a dynamic outfit in a few parts. The pants that go under the dress (which include invisible straps to hold them in place that should work in DS as well). The traditional dress with full length sleeves. 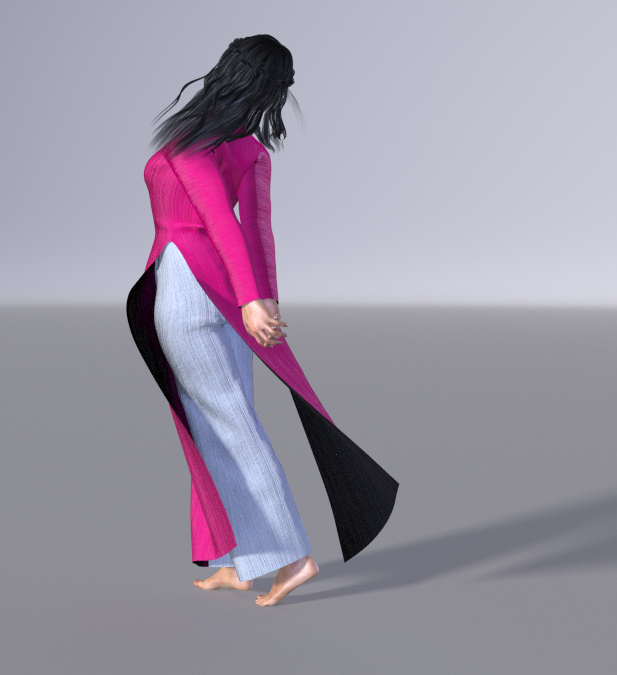 A test render of Dawn done in Superfly.
A fantasy dress with no sleeves.
View media item 1470And as a separate dynamic prop the long kimono sleeves that can be used with either dress or on their own.

All four parts will have built in morphs to size them Sora, Diva, and Alexis. I'm not sure yet how many textures I will have. One of the things I've been spending a lot of time working on, is trying to make sure the patterns stay the same size across all the outfit's parts. I will also include my silk materials I made for Luna's outfit, which will allow for easy recoloring.

Contributing Artist
Looks very cool GG! The chest shape looks just like the one in my "Diamond Dress" for Dawn, even the purple color.

Contributing Artist
Thanks. So the purple was because I love purple, but I was also sort of inspired by lesser known X-Man Psylocke. I'm setting up the textures so that the diamond can be hidden (blends in with the main texture), it own color or texture, and transparent to function as a boob window .

Contributing Artist
Oh yes, I did the same with the Diamond Dress - made the cut a transmap so people could remove it if they wanted. ^^

They are looking so fab, GG! Just wow!!!

Contributing Artist
Thanks guys. Still a lot of work to go. The sleeveless dress isn't refitting as nicely as the other one did, but I think I finally got my templates set up so that I can easily use the same textures and have the patterns size the same. Hopefully soon I'll be ready to have testing start.

I was so excited earlier today, because I cleverly set up the fitting morphs to follow the matching morphs on Dawn. What that meant, since these items are smart props if you loaded Dawn, applied Diva to her, and then added in the various parts of the outfit, they would auto fit, so they would load and instantly apply the Diva morph.

So as I often do as a reward/test, was I started putting together a fun render. And that's when I realized the downside to my coolness. See the cloth room is silly. If you have a morph on a cloth item it likes to apply that morph twice. What I mean is all looks well while the sim is running, but then it suddenly looks all wrong and gets crumpled up, and in the case of a smaller morph like Diva, makes things tiny. It's because the cloth sim basically baked in the morph, but then you have the morph applied as well so it's as if you had set the morph to 2.0 instead of 1.0.

When this happens (which at least in Poser Pro 11 seems to be all the time) you have to go in after the sim has run, and set the morph back to 0. But. . . with my smart morphs, they are at zero, because they are being controlled by Dawn's morphs. Luckily it's not like a conforming item where you can't always adjust things, so if Diva is set to one, after the cloth sim has been run you have to set the Diva morph on the outfit to -1.

Of course if I didn't have the smart morphs, you'd not only have to set the initial morph, but still reset the morph after the sim. So I've still saved people some work, but it's silly and frustrating. I might be able to create a script that auto 'undos' the morphs but that'll take some thought to get it to work right.

Contributing Artist
Sounds a bit like DS's autofollow except that actually dials the morph in so can be dialed out. This is often a problem with ears if they have had the auto follow switched off you end up with ear shaped hair. That would be frustrating GG...

That sucks, GG, that's usually about the time my computer gets threatened with a watery grave!

Contributing Artist
I think the general rule with the Cloth Room is that we have to set morphs *before* running dynamic sims. Once you convert the outfit to dynamic (the Cloth Room does it automatically when you use it), morphs should not be changed anymore, or odd things will happen. If you need to use a morph, it has to be before using the Cloth Room. In my recent "superhero" outfit, the dynamic cape has some posing and flowing morphs, and they should only be applied before going to the Cloth Room. Trying to use them afterwards will either have no effect, or unpredictable things may happen.

Contributing Artist
Thanks for the sympathy guys. Mostly I'm just trying to figure out what makes the nicest experience for the end user. So that I have the frustration and they don't.


Ken1171 said:
I think the general rule with the Cloth Room is that we have to set morphs *before* running dynamic sims.
Click to expand...

Hmm. Now you have me wondering. I do apply the morph first, then run the simulations but. . . I've saved my props with dynamic settings. What I mean by that is that if you load them into a scene where no cloth sim has been run, it will show a Dynamics parameter set to 1.0. The advantage of this is that when you go into the cloth room to create your simulation any constrained groups will already be set up as will fabric options like Fold Resistance etc. So you can have saved cloth properties.

But now I'm wondering. What if I remove all the dynamics. Resave the prop, reload the prop now that it has all the morphs built in, and then add the dynamics back in. Time to experiment. . .

Contributing Artist
It's Ok to have the "dynamic = 1" parameter. That just means the item has dynamic groups, it won't stop you from using morphs. But you can only use them before starting a dynamic simulation. In other words, before you clothify the item. Morphs become inactive after that, and if you force them, bad things will happen. Just apply your morphs before clothifying and things should be Ok.

@Ken1171 You always give really good tips for Dynamics. I appreciate that!

Ken1171 said:
It's Ok to have the "dynamic = 1" parameter. That just means the item has dynamic groups, it won't stop you from using morphs. But you can only use them before starting a dynamic simulation. In other words, before you clothify the item. Morphs become inactive after that, and if you force them, bad things will happen. Just apply your morphs before clothifying and things should be Ok.
Click to expand...

I was pretty sure I was doing things that way, but I carefully double checked my workflow just to be sure. Here's what's interesting. I had set up my morph like this

so as soon as I load the item into the scene, the morph applies(assuming I already had Dawn dialed in as Sora). This is before I've clothified it. And I have the problem. However, if I remove the Value Op, and manually dial in the morph on frame 1, then create a simulation the issue doesn't happen. Which means I may need to get rid of my fancy morph controls, and just have the user go back to doing it manually.

Thanks. The sleeves are a lot of fun.

Contributing Artist
Truth is that the Cloth Room was meant for props, and not conforming oufits with morphs. In my tries, it has been "mostly" Ok with apply morphs before a simulation, but sometimes they reset after the sim, or odd things happen. It's best - if possible - to avoid morphing stuff that goes through simulations. There are some cases where it doesn't work, but I don't know why. One thing we can do is to spawn a prop out of the sim result, and then morph that as a prop in case you need to morph it after a sim.

Contributing Artist
So in this case, the morph is just a refit morph for Diva. The dress is a single prop, but I added morphs to help fit it, because although it's often easy to make a cloth item fit a large figure, they don't easily go to smaller figures. I'm not actually conforming (there are no joints, it's just a prop) I was just having the cloth item 'follow' the morph on the parent. But it seems Poser doesn't like this. If I can confirm the behavior is fairly consistent I think I script a way around it.
You must log in or register to reply here.
Share:
Facebook Twitter Reddit Pinterest Tumblr WhatsApp Email Share Link
Top