Staff member
QAV-BEE
Oh, I'm with you on this. Made me laugh

Seliah (Childe of Fyre) said:
The last two pictures - the scarf and the blue hat - I did those with a different kind of yarnn. The scarf is actually just a single skein of yarn (it used the ENTIRE skein), and the hat is about half the skein of yarn. It's a more fluffy homespun style of yarn, but it works up fast and is pretty warm.
Click to expand...

I'm liking the look of that yarn, especially for the scarf. Everything looks great, and at first glance, I wondered if those first two were shawls or ponchos. Your heart-sister does very nice work indeed.

Miss B said:
I'm liking the look of that yarn, especially for the scarf. Everything looks great, and at first glance, I wondered if those first two were shawls or ponchos. Your heart-sister does very nice work indeed.
Click to expand...

Definitely shawls. To get a good photo of them, I had to do it with someone wearing them (my daughter), and it kind of had to be done from the back. So it's hard to tell in the photos, I guess. But yes, definitely shawls.

That yarn is.. interesting. Sometimes those skeins are extremely hard to work with, because it can be hard to see the stitches as you go. Other times, they go together quickly and easily. I still have another skein of homespun around here that I haven't made anything with yet because so far I haven't been able to work with it! LOL

CV-BEE
I'm sure at some point you'll conquer it.

Contributing Artist
I've had similar problems when using homespun Seliah...need to find the right pattern for it or keep it really simple.

CV-BEE
Contributing Artist
Nice to know it's not just me. Yes, the homespun yarn is too busy for anything fancy on a pattern.. simple stitches are best. I do like how it works up though. It's thick, and it's warm...

Contributing Artist
Yep...I made myself a lovely homespun shawl with some of my homespun. Just used really large needles and started with one stitch and just kept increasing until it was done while knitting in plain knit or garter stitch.

CV-BEE
Contributing Artist
So this was the blanket - all finished - and the long shawl that I made to use up the rest of the blue yarn. This would be my daughter modeling the shawl for me to photograph. It really is very long. She's just a touch under five foot tall, and it goes almost to the floor. On me, at five foot, it stops around the ankles... so I know taller folks will be fine with it. 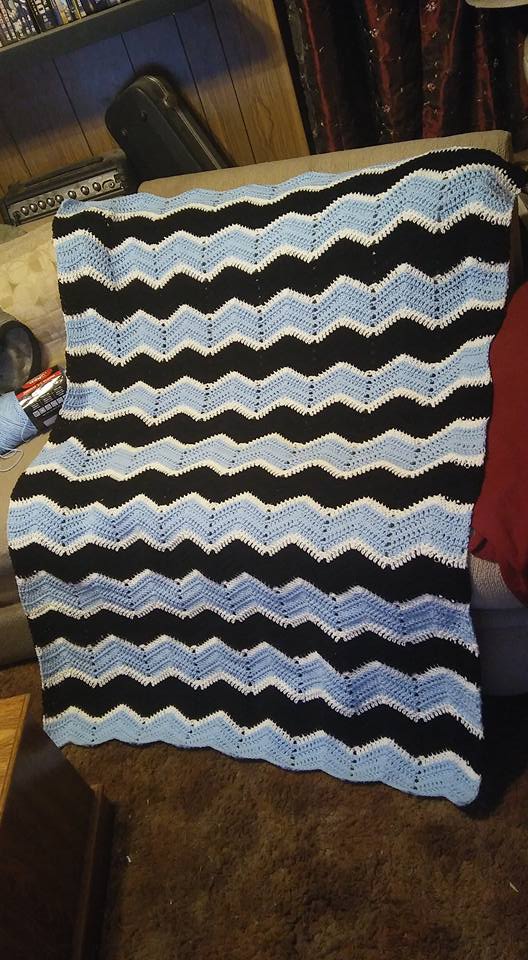 And the shawl - it's a triangular cloth, really. No sleeves or buttons or anything like that. 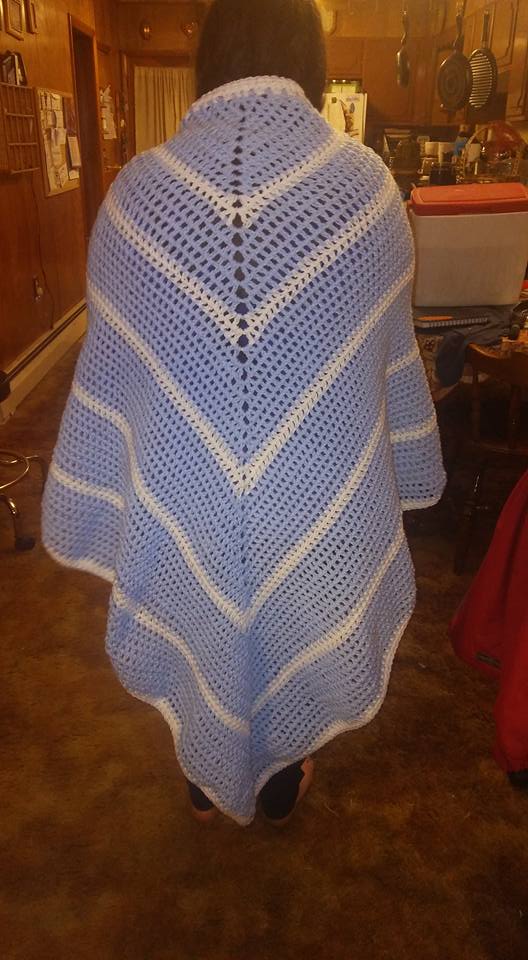 CV-BEE
They both came out great Seliah. I haven't done any crafts work in years, but I can certainly admire the work that went into these.

Seliah (Childe of Fyre) said:
And, as I mentioned before over in the product thread, I've been working on a bunch of yarn crafts for the pipeline protesters out in North Dakota, as well. At the moment, that's about the only things I am doing in regards to the crochet and yarn crafts. Pretty much everything I make right now is getting boxed up and mailed out to Standing Rock.

My girl surprised me as well on this; she jumped right on board with it as soon as she found out they were planning to stay camped out on-site through the winter. Regardless of what anyone thinks or doesn't think about the issue on hand, I know what the winters get to be like out there, and they do have elders and children in addition to the folks standing on the front lines. Frostbite and hypothermia will be a real concern. So we've just been making all sorts of winter stuff, as much and as quickly as we can. This is why my 3D has slowed down a bit lately. I am still working on the 3D stuff, but the bulk of my energy is going into this at the moment... and pretty much anything I happen to earn through 3D is also getting donated to them for legal fees and material supplies as well.

These were the contents of the first box...

And these are part of what's going into the second box. We're still filling up the second one, but it's getting there. This box will probably get mailed out in a couple of days. My heart-sister has also donated two triangular shawls that she made, so I'll be mailing those out along with anything we make ourselves.

The scrunchies are just sort of a "fun" thing to include. As I mentioned, they do have kids out there also. They've got enough on the site at this point that they've actually set up a school at the camps, and well... I was experimenting with the hair ties, and liked how they came out... so we're tossing them in as just something fun for the girls or women who like them. They were really easy and quick to make.. only about 15 minutes a piece; I just worked the yarn over the black hair rubber bands.

Earth tones are my favorites also. I did things in a wide variety of colors for this, so they could hand them out to anyone who needed it. But I have to agree. The earthy colors are my favorites.

They didn't feel like they took too much time. The blanket took me about two weeks... maybe two or three hours a night. The shawl was about the same, really. But what is a long shawl, really, other than a wearable blanket? LOL

Contributing Artist
lol...how many hours Seliah? Two weeks constantly working on them or are you just really quick?

Pendraia said:
lol...how many hours Seliah? Two weeks constantly working on them or are you just really quick?
Click to expand...

So the blanket took about 35 hours to complete. Which isn't too bad for blankets, really. The shawl was in the same neighborhood. I have completed blankets and shawls like that before though, in about 5 days. These took me some extra time because I was fighting to keep myself focused on anything at all. LOL

Contributing Artist
That's not too bad...you must be fairly quick.

CV-BEE
Contributing Artist
@Pendraia - I've been doing crochet since I was 12 years old. I just turned 37 this past summer. I've been at it for quite a while. LOL

Contributing Artist
lol...I've been knitting as long but didn't try crochet until a few years later.

CV-BEE
Contributing Artist
Yeah, I've gone in the other direction. I started on crochet.. I'm only just now trying to come to terms with knitting... my hands just DO NOT WANT to work that way! LOL

Contributing Artist
I love knitting but I don't do as much these days as my hands get sore. Did crochet for a while but didn't do a huge amount and then mainly fine lace type crochet. I was given a tatting shuttle and some crochet hooks that used to belong to my great grandmother years ago, so I even had a go at tatting for a short while. My favourite crafts though would be quilting/applique and knitting.
You must log in or register to reply here.
Share:
Facebook Twitter Reddit Pinterest Tumblr WhatsApp Email Link
Top