What is Pommerlis up to? WIPs

Contributing Artist
LOL
Noodles did give us a big scare though. The other day we were just watching TV when all of a sudden Noodles came running into the living room screaming and howling. So we of course jumped up and went to see what scared her so badly, almost thinking she's seen a ghost.
After close inspection we discovered she had been chewing on the wire of the alarmclock and she got shocked, literally. Apparently we didn't hide the wires well enough.
We had hamsters walking around here freely and they couldn't even reach those wires but leave it to a dachshund to get it out. She didn't bite all the way through, just enought to hit the copper with her teeth but there is not enouh strong language to express what I felt that moment.
I thought I died a little.

THAT is just too scary, Pom! What an awful thing to happen and I am not surprised at your reaction. I do a lot of dogsitting and having something go wrong with one of them is always a big worry. But that! That would send ME screaming as well as the dog. *shudder*

LOL, Pom, it must be puppy get in trouble season!

I have a rescue pup we've had a couple of months who is finally settling in, but the other day I was at the computer working when it suddenly shut off. Puppy was under my desk at my feet, and she yelped, and power off. Yeah, she bit the plug. That's been her new "trick" lately - unplugging the television. So, she decided to do that with my big surge supressor plug on the computer and it bit her!

Yes, she was OK after both of us suffered from the initial shock from something so dangerous, but she has stopped that game of playing with plugs now. Thank goodness!

LOL, ok, maybe I SHOULDN'T have been referring to Noodles!

CV-BEE
Ohhhh poor Noodles. Hope she gets over that experience quickly.

Contributing Artist
Glitterati, mabe they are related LOL
Noodles is fine, I wasn't, I was bordering on a nervous breakdown and my partner was hyperventilating. I do hope she got a big enough scare to leave wires alone from now on though. We do have a circuit breaker in our central fuse box, we got a whole new fuse-box actually after years of nagging so I'm happy with that.
Noodles is five months old and a hand full, it's like a human toddler. I can not turn my back for a second.

pommerlis said:
Glitterati, mabe they are related LOL
Noodles is fine, I wasn't, I was bordering on a nervous breakdown and my partner was hyperventilating. I do hope she got a big enough scare to leave wires alone from now on though. We do have a circuit breaker in our central fuse box, we got a whole new fuse-box actually after years of nagging so I'm happy with that.
Noodles is five months old and a hand full, it's like a human toddler. I can not turn my back for a second.
Click to expand...

LOL, perhaps they are related. I think mine was as discombobulated as I was though. She was NOT happy.

We're not sure of her age, though she is young. She was taken into a vet after being hit by a car and they needed someone to adopt her to sponsor her medical needs.

She's a very sweet puppy and I'm very happy we got her - as long as that little plug trick stops. LOL!

CV-BEE
Contributing Artist
I have plastic containers lining the edge of the sink and counter. Tsuki has decided that the kitchen sink is great fun to explore. Hopefully, when her water fountain arrives, that will appeal to her far more than the kitchen sink.

I'd have been freaked out too Pom! I turned off the surge protector by the couch yesterday when I left for work. She's been nibbling at the cell phone and Kindle cords that are plugged in there. Hopefully, she will grow out of that sooner rather than later! So far, those seem to be the only cords that attract her. So I probably should wrap them up and set them out of the way when they aren't in use. First kitten I've had that thought electric cords were toys.

CV-BEE
Ohhhh Tsuki's going to have her very own water fountain? Kewl.

Packing up the cords and getting them out of her reach will be a good move.

Contributing Artist
Oh...that is scary!
@Satira, my cat likes water and will even sit in the trough with the tap running. She'll bat the water and then use that paw to clean herself.

CV-BEE
Contributing Artist
She has figured out that water comes out of the faucet in the bathroom, so now when I'm in there, she jumps on the counter and wants me to turn the water on. It was funny the first time she tried drinking the trickling water. She kept sticking her nose in the water and sneezing. She's now figured out how to drink without getting water in her nose.

She will bat at the water, but then shakes her paw because she's not entirely sure she likes getting her paw wet.

Contributing Artist
That's so cute...Vesper will drink also but she likes to clean herself with it best.

Contributing Artist
Well, in my browsing for inspiration of course I came across those celestial cute and sometimes misschievous cherubs so I'm working on some poses that could be suitable for that. Maybe with a little xtra thingy if I can make something work that I have in mind but I'm not saying anything about that yet.

For now a little teaser will have to do 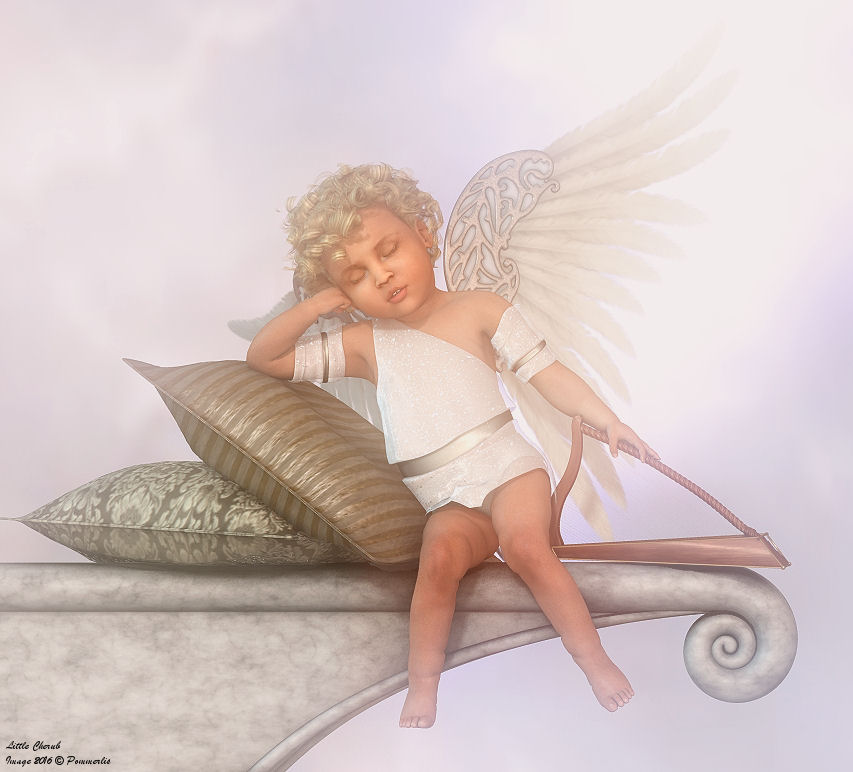 Contributing Artist
Very cute...that harp wouldn't be the extra thingy would it? It certainly looks good! Are those wings from Rendo?

CV-BEE
Oh my goodness, Pom, what an adorable render.

Contributing Artist
Pendraia, no, it's not the harp. I couldn't model such an instrument if my life depended on it. It's a freebie I picked up somewhere.

The Wings are from rendo, they are made by Fabiana, they are called DarkHeaven Wings.
I have her store on speeddial in my browser LOL

Contributing Artist
I thought they were Fabiana's...damn...I thought I had guessed it.

pommerlis said:
I have her store on speeddial in my browser LOL
Click to expand...