HW Honey Bear
Yes, Rae, but for his green eyes... Travis had gold eyes... and if I can find one showing Nickie's HUGE TOE PADS...everyone is kinda whoa! at the size of his toes...which made it fun for me to photograph and put on the mil cat toe pads! LOL!

and here is a funny couple of Nickie at a young age:
nicki2

HW Honey Bear
this is the only one (on my website, the others are in some drawer) that shows a bit of his toes...and it's his front toe pads that are huge under those big round paws... I SWEAR he sounds like a herd of buffalo when he jumps up on the kitchen counter, leaps to the top of the fridge and then to the top of the kitchen cubboards that stretch the length of the kitchen... he RUNS up and down that wood and "thunders"... ! 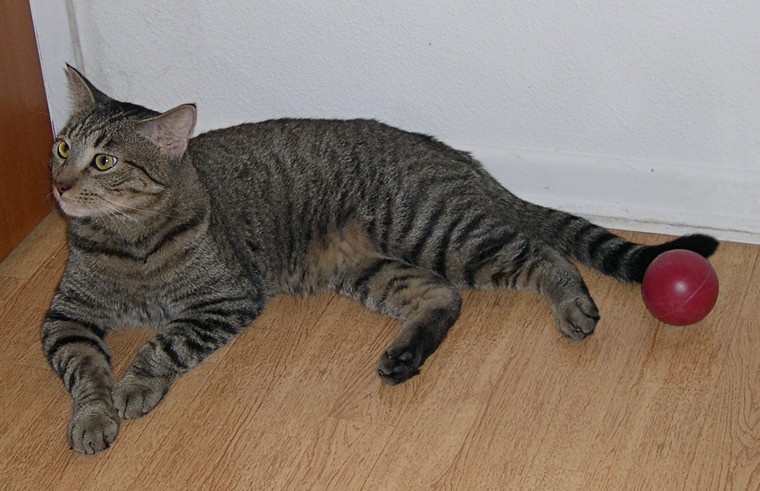 He did a lot of WILD things as a kid...always climbing.... and he "successfully" brought down my double curtains on BOTH sliding door/windows in the family room, when he scrambled across the double rods one day!! (the plastic thingy's holding the metal hooks had rotted with sun aging, easily broke with his weight... he grabbed hold of the falling heavy drapes...and they all came tumbling down!!

Ok... I'm done 'hogging' this thread... I SO enjoy all the pet photos...even snakes! (except I would hope none of those pythons ever got near a kitten!!! shudder!!)

Lyne said:
and here is a funny couple of Nickie at a young age:
nicki2
Click to expand...

It often surprises me what fascinates kitties.

Rae134 said:
oh look at those adorable hooves on Rosy
Click to expand...

LOL, I know, right!? I took like a dozen or more rolls of 36 (old days of FILM cameras) photos of Rosy when she was born... shots of brand new teeth, when they came in...every single thing you could think of, I photographed! I was THERE for her birth, and it was SUCH a fantastic time... loving her, and cuddling...training... GREATEST years of my entire life!

CV-BEE
Contributing Artist
Chloe's eyes change, they are basically gold but she does have green around the pupil so it depends on how big they are (she also had huge black devil eyes )

This is a set of photos of a cat that was the love of my life, we had to let him go when the medication couldn't keep up with his heart failure
RIP Zeus (my husband was sooooo anti-cat until Zeus stole his heart too) 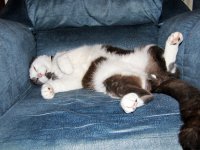 He was a big cat too, not Main Coon size but big, the vet called him the Staffy of the cat world (for those that don't know - Staffy is short for Staffordshire Bull Terrier)

HW Honey Bear
awww I just love it when a cat steal's a 'dog person's heart' !!! Zeus looks like such a wonderful guy!! hugs!! (re: medications failing, and THAT awful decision...sigh.) 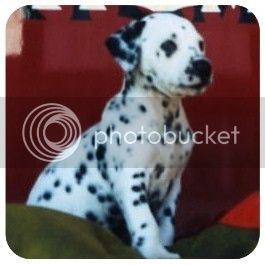 Just so cute! She is lovely...

Rae134 said:
I don't mind snakes to look at but please don't ask me to handle one but I'd happily hold a lizard (well, maybe not a Goanna, those suckers bite and you can get a bad infection from them, nasty).
Click to expand...

Last year during an incursion where they brought it lots of different animals I was asked to stand up and help the guy who was presenting. Before I knew it I had a snake wrapped around my neck. I nearly freaked but couldn't say anything because I didn't want to upset the kids who are only Grade 1/2's. Scariest thing...like you I don't like handling them.

Lyne, I love your cat pictures especially your grey tabbies. Not that I'm biased or anything...
J

These are my two resident weirdos.

The tortie up top is Gaea -- pronounced with a soft G like George and a long E like Caesar. I've had a number of people argue with me that I'm pronouncing it wrong -- but none of these people agree with each other (lol) and hey, I reckon that since I named her I can pronounce it however I like! G's been with me since 2002. I named her for Pangaea because she's a whole lot of earth tones, has been my world at times, and sometimes thinks the world revolves around her!

The Queen of Stripes below Gaea is Abby. My fiancée named her that because ...it rhymes with tabby. Abby is a tiny slip of a thing that's about 1.5 years old and could solve the planet's energy woes if we could bottle her morning and evening crazies.

(Sorry if the pic is too large; not sure how to resize a linked image here on the forum...)

CV-BEE
Contributing Artist
Awww James, they look sweet (my Chloe gets the zoomies about 4am)
J

Rae134 said:
Awww James, they look sweet (my Chloe gets the zoomies about 4am)
Click to expand...

Thanks. Love the pic of Chloe.

CV-BEE
Those are 2 beautiful kitties James, thanks for sharing with us, and in case I haven't done so already, welcome to the HiveWire forums.
J

Thank you, and thank you.

Gaea as in Gaia, mother earth???
Click to expand...

Sort of, but not really...kind of? But only because the word Pangaea is derived in part from Gaia. Mostly I named her after Pangaea because of all her earth-tone colours. 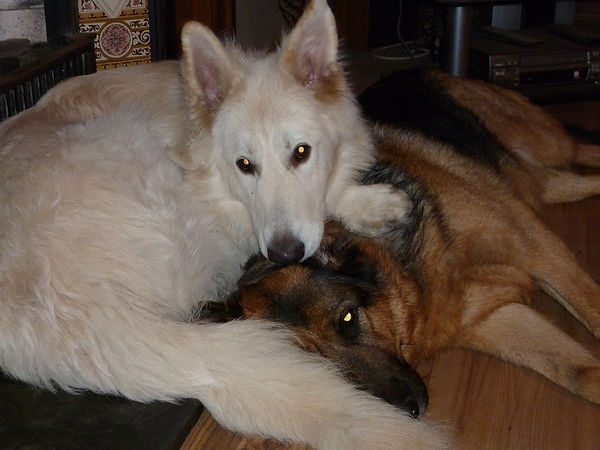 An indication of how big they are: 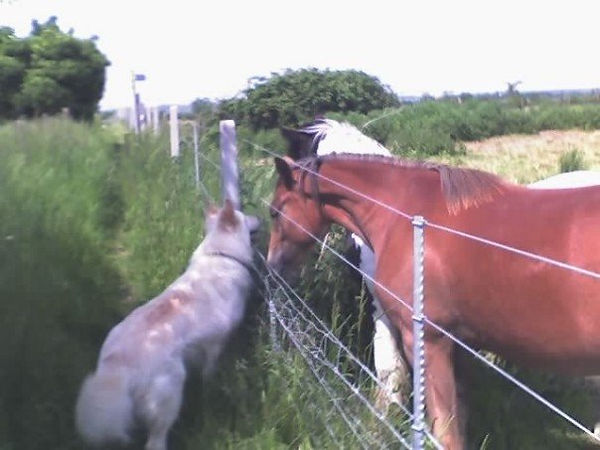 CV-BEE
Contributing Artist
My Chilli's girlfriends name is Ghost (after the dire wolf in Games of Thrones) and she's a White GSD too (although a short haired one).

I love your Ghosts colour, is that usual in your area to have the buff colours? The only Whites GSDs I've seen in Aus have been pure snow white.
J

I don't think I've ever seen a blonde German shepherd like that. Or perhaps I have but just didn't recognize it as a Shepherd. Beautiful animals. If we had a farm or an acreage, I'd like to get a Shepherd.

Rae134 said:
My Chilli's girlfriends name is Ghost (after the dire wolf in Games of Thrones) and she's a White GSD too (although a short haired one).

I love your Ghosts colour, is that usual in your area to have the buff colours? The only Whites GSDs I've seen in Aus have been pure snow white.
Click to expand...

Quite a few have buff saddles but some are pure white.

James R. said:
Sort of, but not really...kind of? But only because the word Pangaea is derived in part from Gaia. Mostly I named her after Pangaea because of all her earth-tone colours.
Click to expand...

Jon nice Sheps but I have to ask is Ghost a massive dog or are those small horses.