Hi folks, I stumbled across a Cycles based landscape material that I've been using with Blender's ANT Landscape add on. It puts a grassy surface on flat areas of the mesh and a rocky surface on the more vertical areas. It's similar I think to how materials are set up in Terradome.

I wondered if there was a similar one that you might know of for Blender Internal? I like to use it as well on occasion. Just as good might be a tutorial on how to make it myself though at this point I'm still figuring out how to do materials in Blender.

Contributing Artist
BI can use nodes just like Cycles does, except the textures and shaders are separate (a confusing distinction, IMHO). As long as the node that can tell the flat from the vertical is there when you switch to BI, then all you should need to do is create the two sets of textures (assuming, say, normal/diffuse/specular) in the texture editor and use the node(s) that masks the two types of surfaces to combine them. I'm poking around and haven't found a node or node set to do that yet, but if you post the Cycles material, we might be able to figure it out.

Why do you use BI, just out of curiosity?

kobaltkween said:
BI can use nodes just like Cycles does, except the textures and shaders are separate (a confusing distinction, IMHO). As long as the node that can tell the flat from the vertical is there when you switch to BI, then all you should need to do is create the two sets of textures (assuming, say, normal/diffuse/specular) in the texture editor and use the node(s) that masks the two types of surfaces to combine them. I'm poking around and haven't found a node or node set to do that yet, but if you post the Cycles material, we might be able to figure it out.

Why do you use BI, just out of curiosity?
Click to expand...

I got the material from this site: Landscape Shader

Come to think of it, I thought I saw where there was an add on or something that changes materials from one render engine to the other but can't remember where it was.

As to your question, I don't use any particular render engine at the moment, I'm experimenting. BI makes more sense to me right off the bat with my Poser oriented mind. I'm not much into photorealism, BI seems to render faster on my CPU (don't have the card for GPU) and I'm very interested in Freestyle. I'm also running into various tutorials and products based on BI. Blender is complex enough that "easy" becomes a great feature as I learn other parts of the program. Feel free to enlighten me on any mis-assumptions. Thanks.

Contributing Artist
Awesome shader!
So there's two aspects that seem to be driving how the rock and grass combine. The first is how the grass maps are handled, so that they'll tile according to the geometry. 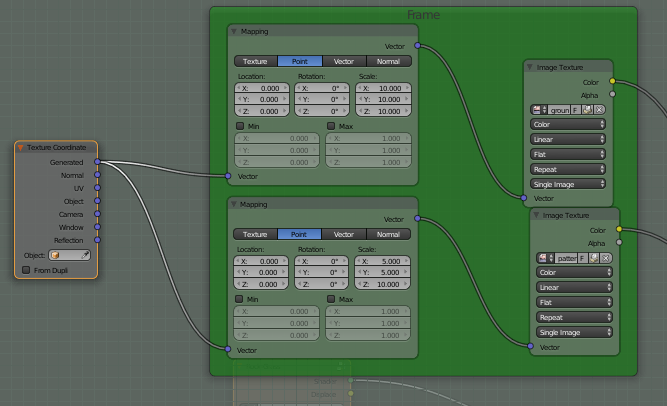 It uses the Texture Cooridinate node hooked to the Mapping node with Point selected. Scale changes how it tiles, and seems to work the opposite of Poser in general. As far as I can tell, this texture is just for the grass, and the stone texture is purely procedural. But I'm not absolutely sure.

The slope detection is, as far as I can tell, this group of nodes

Maybe reproduce the first in a grass texture, make a stone texture, then use the second in a shader to control a MixRGB node with the grass and stone textures plugged into it? That's my first thought, at least.

Cycles isn't designed for photorealism, just a better balance and range between realism and stylization than BI. Brecht's intention was more power for realism _and_ stylization (at least, that's what he said). It also works with Freestyle. I think it even works with Freestyle in ways BI can't now, but I'm not sure. I know that BI is no longer being developed, and Freestyle and Cycles have had features added fairly recently, but I don't use BI and have only played a little with Freestyle, so I'm not certain. But generally speaking, everything in Cycles is designed to let you add _tons_ of stylization any way you want. There's a lot of power I'm not sure is in BI. Checking, yeah, there's actually more ways to stylize your shaders in Cycles, because there's more info you can base things on. For instance, Hair Info, Fresnel and Layer Weight, Light Path, and Object Info.

I actually wish the Cycles team gave photorealism a higher priority. The quickest and most versatile way to generate caustics is to fake them.

I can see how if you're used to fake reflections/specular, BI will probably be more familiar when it comes to highlights. And if you're mostly used to using the root node, it would make sense that the Material and Extended Material nodes seem more like Poser.

For me, though, I find Cycles more like Poser than BI. For one thing, the core shading nodes are more similar. Since I generally avoid using the diffuse and specular shaders internal to the FF root node, I'm very comfortable with selecting the shading nodes I want to combine. But for me the biggie is that there's no distinction between textures and shaders. BI was designed for a time when efficiency was the big issue. So it's designed for shader and geometry independent tiling textures you'd use throughout your scene. I'm much more comfortable with everything working as it does in Poser, where materials are combinations of shaders and textures working together.

But the speed issue is a biggie. I haven't clocked BI vs Cycles on my CPU, but I'm not surprised you find BI faster. Cycles' speed varies depending on the version. Sometimes it gets slower when they add a new feature or tweak something. Then it will get faster in a version or so.

You know, I've been focused on Cycles tutorials so long I don't think Google even sends me BI tutorials when I look. Then again, it may be the type of stuff I look for. I think BI's procedural textures are still more full-featured than Cycles'. Which is great for landscapes and such. I haven't been looking in that area, so I wouldn't have seen BI tutorials for landscapes. I will be soon, so I may see more BI tutorials in the future.

Yeah, you can do so much with Blender. And any 3D studio app, really. I just ignore most of it, and focus on modeling, mapping, modifying and morphing, sculpting, texturing and materials, cloth sims, particles, hair, and rendering. Which, dauntingly, is still less than half of what it can do, and not yet all I want to do. Anything you can do to dip the needle toward getting stuff done is a smart move.

One day you'll have to gather all the insights you've provided on various forums and put it in a book. Call it Questions asked and Answered. It would just include stuff people tend to trip up on in various programs.

Anyhow, I didn't realize Freestyle could be used in Cycles. Don't know if the tuts I looked at just preferred BI or if it handled it differently.

A tut I looked at from Blender Guru pointed out that Cycles wasn't realistic out the box and showed how to set up something I think may be similar to the Physical Surface node in Poser. Basically a group of nodes providing a kick start for realistic materials.

I have an older machine so efficiency is important. I've heard tell, and will eventually stumble across the mat I spoke of somewhere. Don't actually need it, just wanted to play with it. I'll just allow myself to be distracted by something else in the meantime ;-)

Found this on Vimeo. Seems less robust than the other but easy enough to do.

Contributing Artist
Very helpful video! Very clear and well explained. Yeah, it's less robust, and doesn't have any cloud/fractal texture to the blend, so it's not such a uniform and smooth transition. But it does what I think you want to do.

I have to admit I find it more complex and easy to break than the noded method. The other is what, 6 nodes? And that's allowing for 2 different blendings (if you mess with the two colors, you'll see what I mean- it's kind of interesting). To do the same exact thing as in the video, I believe it would just be 3 nodes. Testing, yep, it's just Geometry node, Normal node, ColorRamp. And that combination allows you to incorporate some procedural stuff in your mask if you want to. I don't see how you'd do that with the method in the video.

More of an issue to me is that it only works by texture "order". Which I've only experienced as internal, unable to be changed, and complex in a scene with just a figure's worth of textures, let alone a full scene with clothes and such. But even if I dealt with that (something I'm sure is possible), I'd be concerned about how to get that same map to control my specular, bump, and displacement, which are kind of the minimum I'd want in a combination of grass and rock.

I'm very sure you can do all that without nodes. I just know it's generally easier and quicker to use nodes to get one mask to control several textures than it is to do that without nodes, that being why noded interfaces were created.

That said, my husband works with audio and finds noded interfaces confusing. And I'm not partial to all noded interfaces. I like Blender's and Poser's. Terragen? Not so much. For some reason, I find the Terragen node interface very hard to read, while Poser's and Blender's made sense to me right off.

Anyway, for anyone who's interested, here's the Cycles noded equivalent of the video material. The "grass" is actually a green marble texture I had downloaded, and is flat mapped instead of tube because tube goes nuts on those nice flat surfaces. And really, that only matters because I haven't mapped this. Generally speaking, that's why these materials use "Generated" coordinates. If you were sculpting a UV mapped plane into wild shapes, the textures would get distorted and stretched. Both the method in the video and this method (which is the same as the one in the original shader) allow the textures to tile based on the shape, not the polys.

I figure you realized that, but I thought it might be good to point out for anyone who comes to this thread kind of randomly. 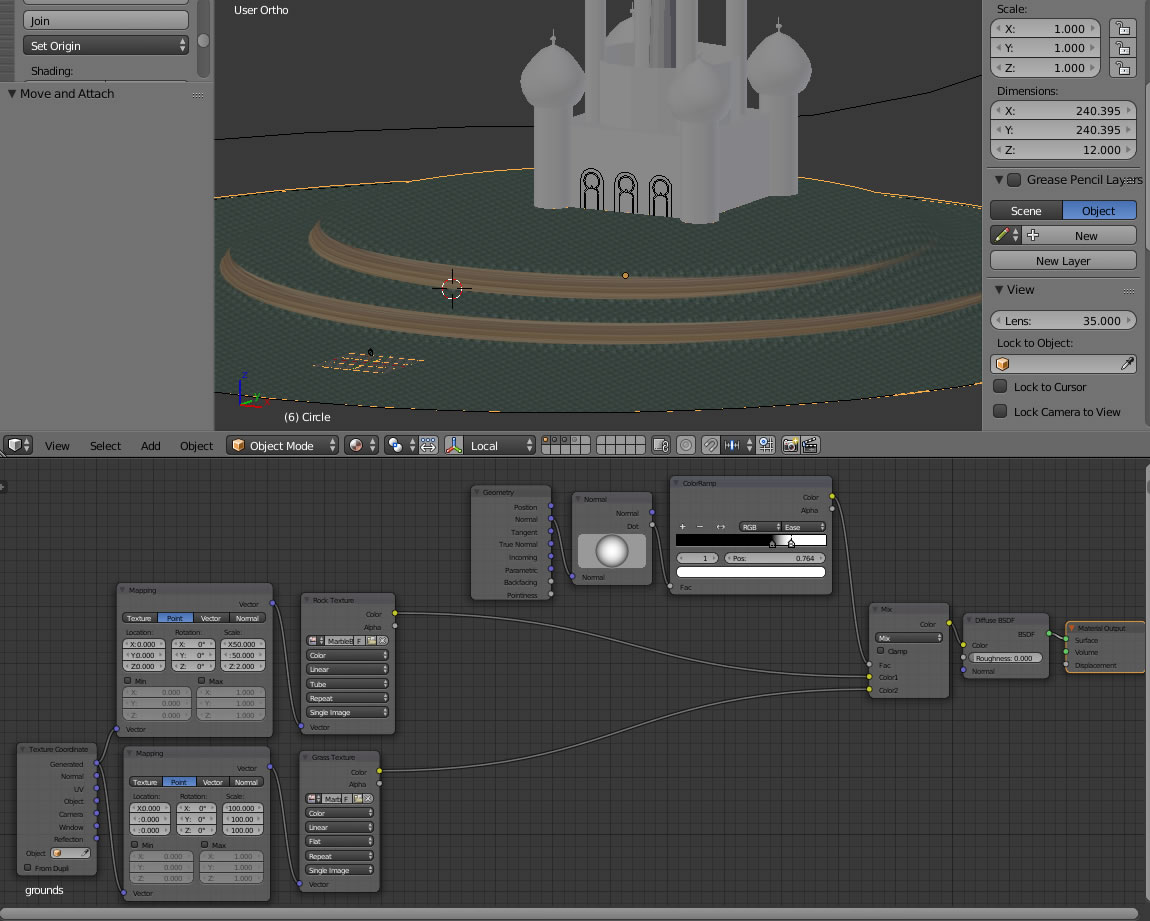 Oh, and you should be able to translate this material to Superfly without a problem, if you wanted. The only node that Poser doesn't have is Blender's ColorRamp, which is much more versatile and adjustable than Poser's. But what can you do.

If you're big on efficiency and want to use Cycles, there's a few different tutorials about that. There seems to be a fair amount you can do to control what it does and how it treats different light sources. My big interest is caustics, so I've always pushed whatever machine I've had to the max, regardless of the renderer. So rendering efficiency isn't really my thing. But I know trying to squeeze the fastest time out of Cycles is something a lot of people in the Blender community are into.
You must log in or register to reply here.
Share:
Facebook Twitter Reddit Pinterest Tumblr WhatsApp Email Share Link
Top