Ever wanted to use more IK (Inverse Kinematics), but found it cumbersome, and hard to reach in Poser? The IK Manager P12 brings all your Inverse Kinematic needs to one single, easy to reach panel. Now you can quickly enable/disable IK on the hands and feet, and also have visual cues to what IK chains are enabled on any figure. Just select the figure and IK Manager will show you the IK status, and allow you to change it. 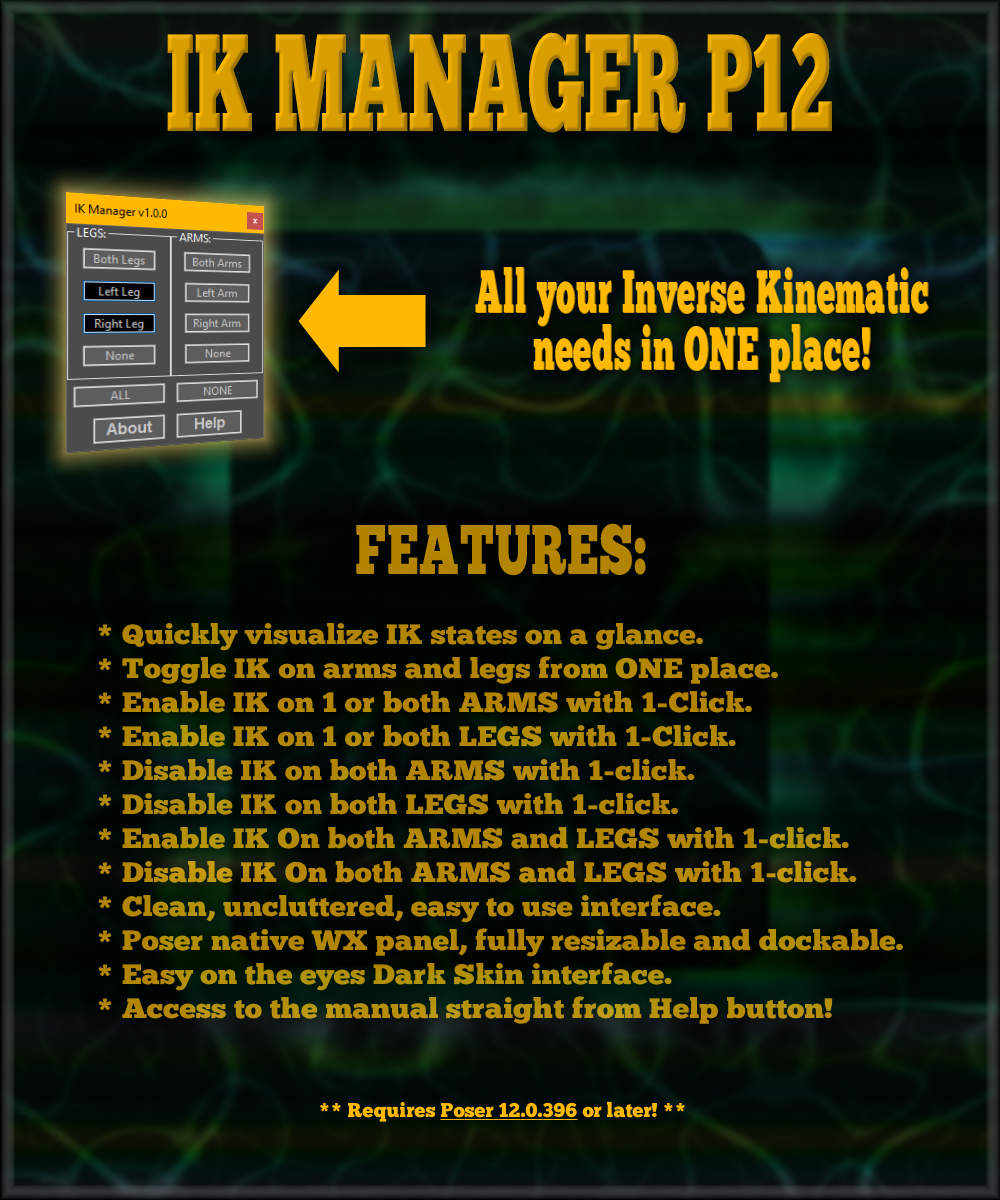 * Clear, easy to understand interface with dedicated IK buttons.
* Quick access to standard IK chains from a single panel.
* Instant visual cues to the figure's IK chain states.
* Toggle IK on each hand or foot in any combination with toggle buttons.
* 1-click automations to toggle IK on both hands, both feet, everything, or nothing.
* PDF Manual with instructions and best practices.
* Help button to quickly access the PDF manual straight from the tool's interface.
* Native Poser WX interface that can be moved, resized, and docked into Poser.
* Smart interface - remembers it's last position, size and docking state from the previous session.
* Easy on the eyes Dark Theme interface that matches Poser.
* Supports Poser hands and feet IK chains that follow Poser standard naming conventions.

The script has been submitted to Renderosity, and is currently going through QAV. Should hit the store anytime in the next days.

Contributing Artist
There will be a delay on the release due to an issue where Poser's embedded library is not installing Python scripts properly. It appears they get installed, but are not available in the scripts menu until Poser is restarted. Rendo will hold the release until they can fix this Poser issue. Almost there now.

Contributing Artist
Had a final version submitted, just waiting for Rendo to update their store backend so I can sell it there.

Contributing Artist
Still waiting on Rendo to complete the required changes on Poser 12 to support my new Python scripts. The tool is already with Rendo and has passed their QAV. Please bear with me as we wait for them to get it done. They are holding my tool releases until they are done with the changes in P12. ^^

Contributing Artist
You know with all your scripts getting there or in the que at 'Rosity for release, you may want to make your own scripts panel for easy access of ALL your scripts. If you can manage the code to "auto add" any new script you made that it detects that would be super cool too. The older script panel that comes with Poser is a bitch to change out scripts to be loaded as new defaults. So a "Ken's Scripts" panel would be a great addition to your scripts.

RAMWolff said:
So a "Ken's Scripts" panel would be a great addition to your scripts.
Click to expand...

I have been thinking about that. I cold make a new scripts menu that auto-adds my scripts to it when launched. I will give it a try.

Contributing Artist
Just purchase it, waiting for new scripts
I am a script addict and was missing really great new scripts for Poser11/12 since the old script writer retire. Big thanks for stepping in Ken.

AnimaGemini said:
Just purchase it, waiting for new scripts
I am a script addict and was missing really great new scripts for Poser11/12 since the old script writer retire. Big thanks for stepping in Ken.
Click to expand...

You're very welcome and thank you! I think you bought LockMaster. This one was not released yet.

Contributing Artist
Okay, stupid me.....I see script and brain stops to work. LOL
But I fav you so I can see when the release for new scripts is there.

Contributing Artist
Very useful tool btw.. Just installed it and now toggle around. Highly recommended for everybody who use Poser.

Any idea when your new scatter too is out?

Contributing Artist
Thank you! Leave me a product review at Rendo if you find it useful. ^____^