Contributing Artist
Wow, that's some respectable toes acrobatics! It appears that [hopefully] bulge maps could suffice here. When it comes to feet posing, two of the most common complains are about:

* Ball of the foot bulging at tiptoe and high heels pose. This was so bad with Genesis that I was commissioned a number of times to create new topology to replace the ball of the foot (using geografting), so that her feet could pose properly in those specific poses. This wasn't as bad with Dawn.
* Top of the toes base collapsing at tiptoe and high heels pose. That is, the base of the toes get squashed and loose volume in those poses.

There were also reports of lack of foot arching capabilities, which should be resolved with the new metatarsal bone between foot and toe. For the record, most of these commissions came from people with foot fetish, to whom the feet are the most important part of the body. That is, their galleries are filled with feet close-ups. I have created HUNDREDS of feet morphs for Genesis and Dawn for them, where I think the 2 items above were very important to them. Since one is about bulging and the other about collapsing, maybe bulge maps could be enough for both cases.

I've never seen anyone do such things with their toes. I certainly can't. That is foot circus quality bends!

CV-BEE
Contributing Artist
Neither can I. But, check this out!

Staff member
Co-Founder
I now have the arms, hands and fingernails UVed.

Onto the legs and feet next. 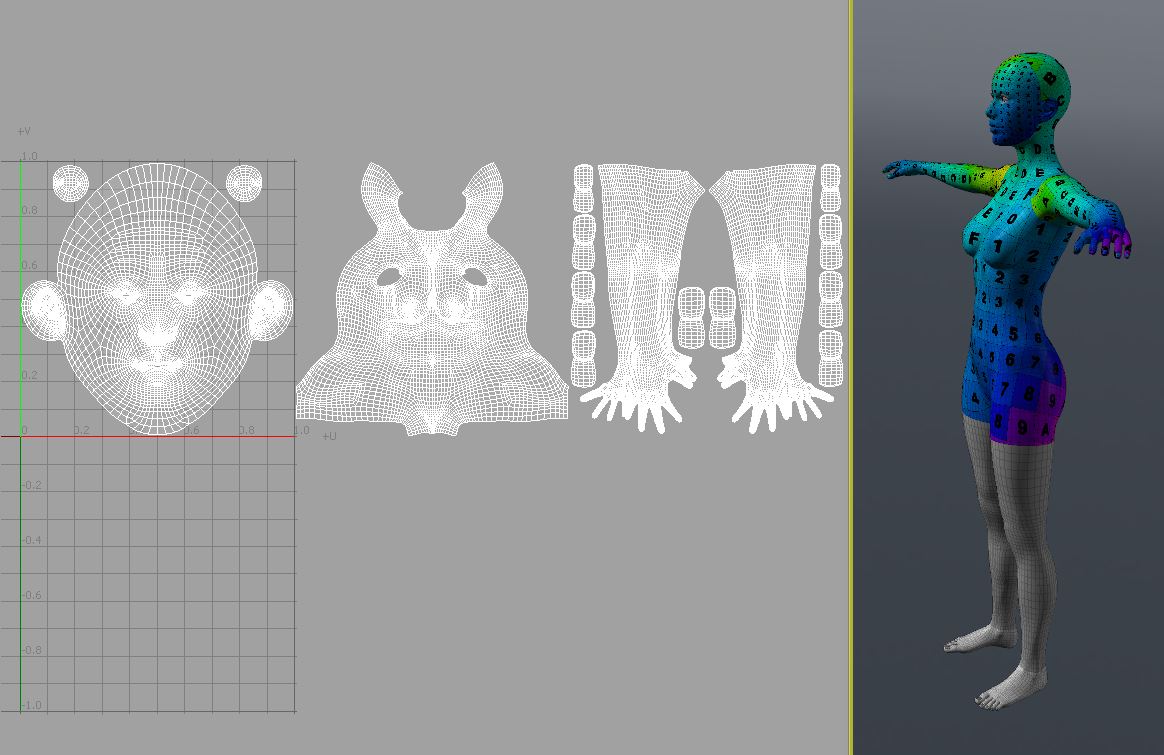 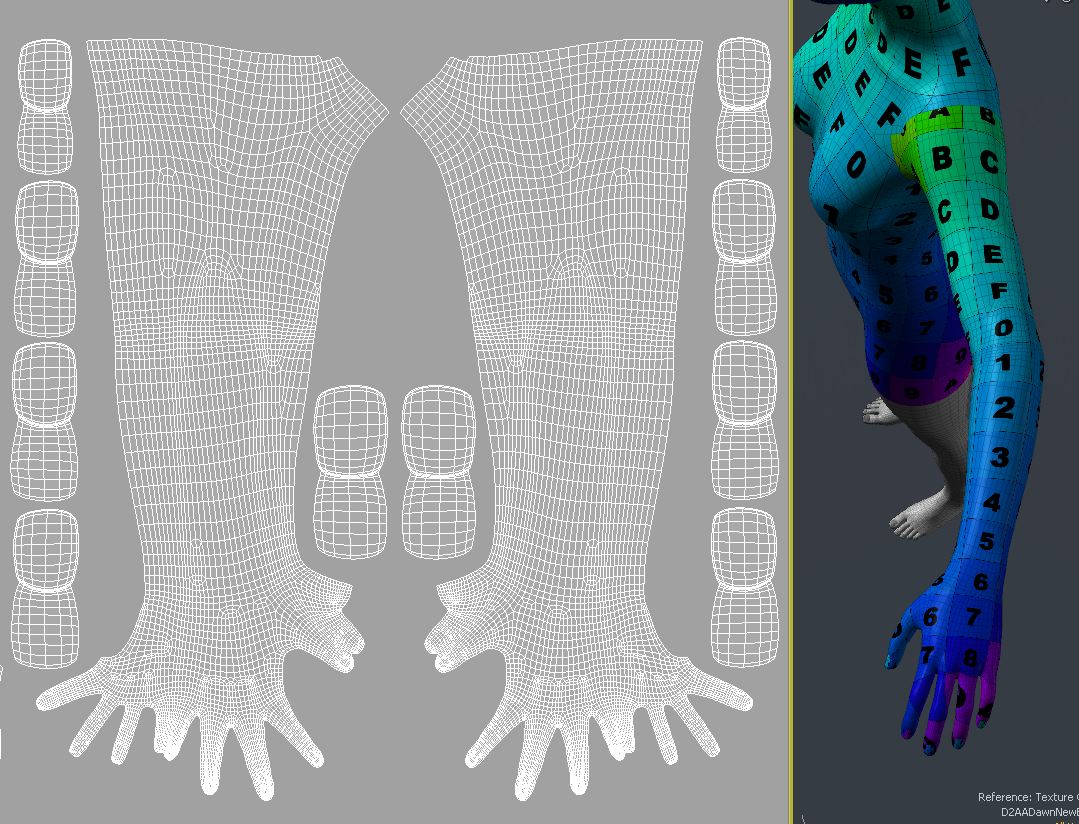 Contributing Artist
The fingernails are now with the arms, so we have 1 less texture map to worry about. I assume the toenails UV shells will be together will the legs, which makes sense. However, artists who want to make texture collections for the nails will have to include the limbs, and would also have to do it over 2 separate maps. Perhaps the nails could be in a separate map as it was with the original Dawn? I think that was done that way to favor texture artists.

CV-BEE
Now that you mention it, that would make sense. Why have to include the limbs if they're only textures for the nails?

Miss B said:
Then again, and of course this would be more initial work, the nails can be included with the limbs for those of use who only choose a color for the nails, AND possibly have a separate map for the nails for those who only like to do fancy nail designs.
Click to expand...

If the nails are together with the limbs, texture artists would still have to make 2 separate maps (fingers and toenails) and nail polish options would have to include the limbs anyway. In addition, skin textures tend to be 4K, while nail textures could be 1K or 2K. This would force nail polish options to be always 4K, making package sizes larger. No matter how I look at this, it doesn't favor texture artists.

Staff member
HW3D Exclusive Artist
Folks, this should be fine with the nails. You only have to include the limbs on the base texture. The other fancy nails can have no texture in the limbs area because you don’t need to apply the map to the limbs shader. Only the nails shader. When folks want detailed nails 4K should be good for this. But they can lower it if they want. It will be more pixelated is all.

Contributing Artist
So how is the rigging going, Paul? I can't wait to see the most critical part - the thighs. The original Dawn has exceptionally good shoulders and arms bending considering those don't use any JCMs. So I am more interested on the thighs, the bone placing and the weights. That guy from the SMS forums has demonstrated how improved this could be on Dawn by just moving the thigh bone origin a little higher, where bending was much better even without JCMs. That's when I first realized that the thigh bending issue on Dawn was not related to the weights, but instead to the bone placement. After repositioning the thigh bone, the legs split pose without JCMs has produced a shape very similar to Dawn with all JCMs applied. I wish I remembered the name of the guy, but he used a medical illustration of a woman where the skeleton was visible, and he placed the thigh bone origin at the matching position with the illustration. The results were surprisingly good. We can't change that on DawnSE, but we can on the new one, and I have been waiting to get to this part for years now.

Staff member
HW3D Exclusive Artist
You will all be happy to know, I have countless references and resources to help with bone placement for all of the joints. The main goal is to get the rig as far as it can go with weights and bulge maps. Then we will use minimal JCMs to get things just right. We will be utilizing the latest tech from both programs while making it easier for the user and creator.

We kept track of all the things folks didn't like about Dawn and we can now implement our improvements to those areas. It is the reason we are doing Dawn 2.0. A figure for the sake of a figure is not enough, Dawn 2.0 has to improve from her original and be the best figure for the market. We know we can't create the perfect figure for everyone, but that will always be our goal and we will continue to push the boundaries and wow our community with the best possible content, in order to reach for that goal.

While we continue to make progress, please remember that no one person has all the answers and we benefit greatly from the communities input. After all, we do this for you folks...so keep those ideas/feedback coming. Thank you all!

Contributing Artist
I like the sound of "minimal JCMs"!

Staff member
Co-Founder
Showing work on the leg UVs. It's coming along. After the legs are done the rest should go pretty fast for me. 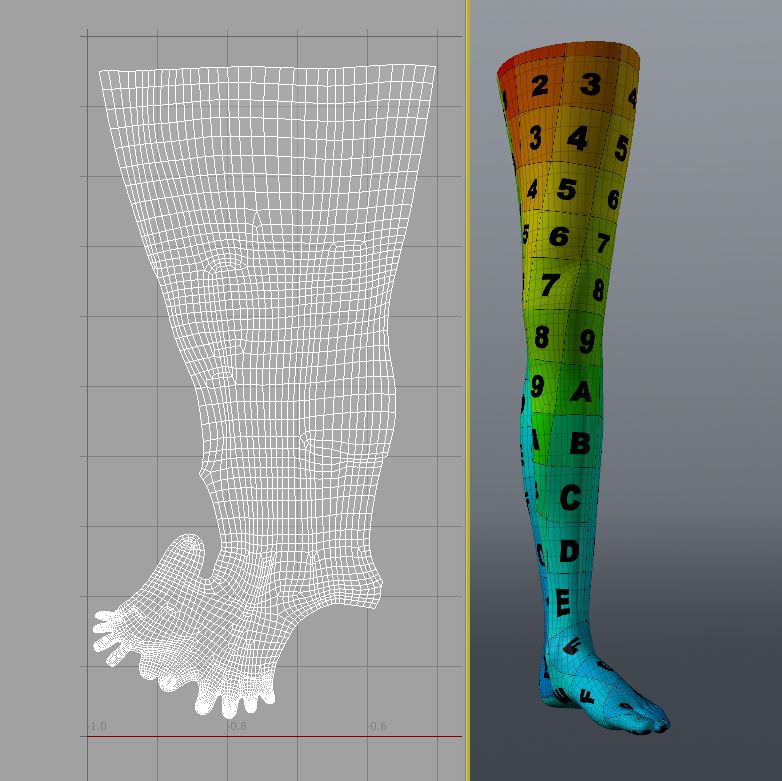 Contributing Artist
Hmmm.... so for nail styles with fine painted-on details that would mean many 4k maps with lots of empty space. If you did the nails separately, you could get exactly the same size, pixel-wise, on a 2k map which only takes a quarter of the space and memory usage.
But I'm not a character creator, I don't know how many people will want to paint nail details. Just saying

Chris said:
Showing work on the leg UVs. It's coming along. After the legs are done the rest should go pretty fast for me.
Click to expand...

Looking great, Chris! The heel gap with the foot shell area seems a bit narrower than the UVs from DawnSE, but the rest looks pretty close. ^^


esha said:
Hmmm.... so for nail styles with fine painted-on details that would mean many 4k maps with lots of empty space. If you did the nails separately, you could get exactly the same size, pixel-wise, on a 2k map which only takes a quarter of the space and memory usage.
But I'm not a character creator, I don't know how many people will want to paint nail details. Just saying

My thoughts exactly. Not only it's a larger map with lots of empty space, but it also splits the finger and toenails into 2 separate maps. With the original Dawn, it was a dedicated single map with all 20 nails. Perfect for texture artists.

Personally, I never paint nail details on my characters because I prefer single colors. It's a matter of taste, but if I were a texture artist, I would prefer it all in a single dedicated map like it was before. There is also the backwards compatibility issue, where nail maps from DawnSE will not work with the new one.

Ken1171 said:
Personally, I never paint nail details on my characters because I prefer single colors. It's a matter of taste, but if I were a texture artist, I would prefer it all in a single dedicated map like it was before.
Click to expand...

I agree, as I usually just add in a color for both. I've never tried designing nail textures, but there are quite a few out there for Dawn, so I don't really see the need to do so myself.
You must log in or register to reply here.
Share:
Facebook Twitter Reddit Pinterest Tumblr WhatsApp Email Link
Top