Just so you know, Ken, I would PAY for additional Iray materials. I know how much work goes into setting them up!

Ken Gilliland said:
I've thought about doing more Shorebirds, but really want to get the big "Update" (Iray/SF materials , DS native version, general model/texture improvements) out of the away first, before I add more bird sets.

Now that the 3 Horse projects are done (2 of which hit the store today: RHT and RHT Materials), my next plans to start the easier "big" updates; Nightjars, Kiwis, plus the Birds of Prey and Waterfowl series. Perhaps the Shorebird series make sense to update after those... there will be some significant model changes with the Waterfowl series (especially in the leg/hip connections-- much smoother now). I'll add this heron to my bird wish list

I do plan to season these updates with some Nature's Wonders releases to provide some revenue for me... NW Frogs 3: Toads and NW Ants are on my list to complete this year.
Click to expand...

JOdel said:
Complete with an ant farm?
Click to expand...

Maybe... but definitely there will be an ant line option (mostly because I hate placing them individually). While the individual model will be character based-- I.m thinking an ant line will look similiar to what I did in the Flock Formation sets- Prop based with a lot of placement and movement morphs.


VortigensBane said:
Just so you know, Ken, I would PAY for additional Iray materials. I know how much work goes into setting them up!
Click to expand...

I know could charge for updates but that's never been my style. I think offering the free updates is made up by customers more willing to get other products of mine knowing I'll always be supporting and some times improving them.

Ken Gilliland said:
I know could charge for updates but that's never been my style. I think offering the free updates is made up by customers more willing to get other products of mine knowing I'll always be supporting and some times improving them.
Click to expand...

A lesson I will try to remember if I ever get my act together enough to put something furry in the store.

HW3D Exclusive Artist
A couple things, first of all, the Winged Horse is out. There are some great renders of it on CWRW's thread.

Here's a wip Iray render of the native DS version of the Crested Carara... I think I'll give it a little more translucency in the wing and tail feathers but it's coming along. I expect the first of the "Birds of Prey" native DS/Iray/SuperFly updates to be ready in mid-to-late August. 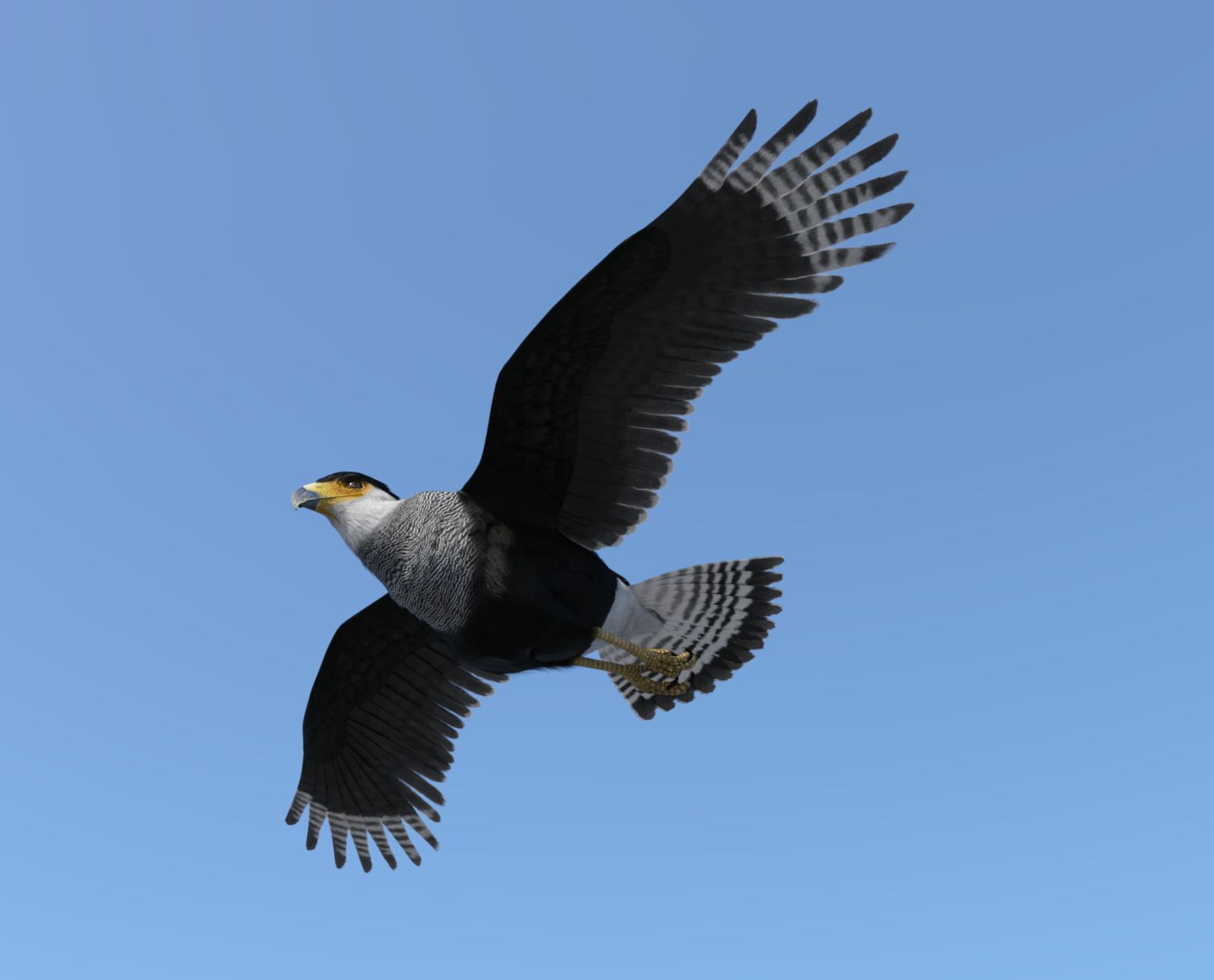 HW Honey Bear
Been meaning to ask. Do birds really fly with their legs stretched out like that? I've always had the impression they flew with their legs bent and their feet up against their chests.

Q. on the wings

in other words are there adjustable morphs like making the wings come closer or farther apart to be able to do this kind of thing?

Seagulls and falcons fly as you thought. But herons and cranes fly with their legs straight back.

I'm sure Ken can add a lot more information ... and maybe even why some bird species fly with their legs tucked while others stretch their legs back.


JOdel said:
Been meaning to ask. Do birds really fly with their legs stretched out like that? I've always had the impression they flew with their legs bent and their feet up against their chests.
Click to expand...

CV-BEE
I would think the more predatory species of birds fly with their legs bent, so they can swoop down and grab their dinner quickly, and still be able to keep flying off in search of a location to set down and eat. At least that's always the impression I've gotten.

JOdel said:
Been meaning to ask. Do birds really fly with their legs stretched out like that? I've always had the impression they flew with their legs bent and their feet up against their chests.
Click to expand...

It depends on the type of bird, most songbirds fly in the manner you said, but many larger birds (herons, egrets) fly as my image shows. I've seen birds of prey fly either way.

Q. on the wings

can they be used on other products... like huMan figures... cats... bagpipes and things like that...
in other words are there adjustable morphs like making the wings come closer or farther apart to be able to do this kind of thing?
Click to expand...

The Horse wings were designed specifically for the the horse. There are morphs to change wing length, shape, lots of feather controls and fits for almost every breed of horse. Yes, you can have flying Clydesdales or Shetlands, but there is nothing to aid you in getting it to fit anything but the HW3D horse. I may eventually create a standalone set for the Big Cat/House Cat but for now, I'm done with those types of projects. I'm want to get back to doing birds and other NW things.

pigeons can fly for over 12 hours like this non stop..... depending on their lactic acid build up they sometimes have trouble getting the landing gears down upon landing after such long flights. 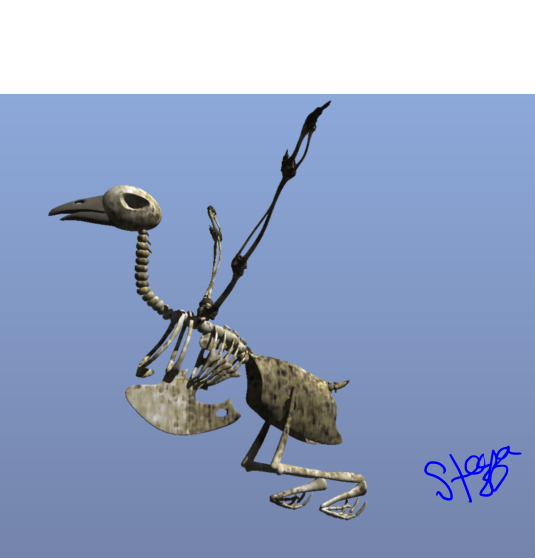 I would vote for a greater wing/tail translucency, but then, you probably knew that already.

HW3D Exclusive Artist
I'm playing around with the new revisions for the Songbird ReMix series (which will include DS native versions, support for all 4 renders (FF, SF, Iray, and 3Delight), plus improvements to older models), but first there are some even bigger changes I'd like to do.

I'm looking for customer opinion on some of these changes....

1. Format- I'm debating on having all the revised birds load preassembled. No longer would you have to select the base parts then apply material-morph setting files on top of them. You simply load the file and the bird is ready to go. The DS version will work pretty easy, all the bases get saved in the data folder and the duf "character" files simply draw from the needed base. The Poser version will be a little more tricky but think if I save the base model morphs out to .pmd files, that will streamline the .cr2 bird character files to work similar to the DS solution. I'm also revealing the invisible wing controllers in the DS version (DS doesn't accept the "Edges only" preview mode). It simply told DS not to include them in renders.

2. Library Structure- I'm going to move towards a newer library structure for both versions. Part of the reason is to not confuse the older Songbird library with new update. It's going to take 6-months to year+ to move the 1000+ birds I have to the new format, so limiting confusion over versions is important since some will need to rewritten to support the newer CR2/dufs. I'm going to be using the following library structure for both DS and Poser:

>Bird Base Models (this will hold the unassembled base models for those who want to play around/or make their own birds)
>Bird Library (this is where all the birds will be)
>Manuals
>Props
​
The part I'm still hashing out is the Bird Library. Part of me wants to throw away the numbered volume system I've had for the last decade+ and do something radically different that makes more sense to me. If I keep the old volume system, I'd like to at least combine some volumes-- like Vultures 1/2, European Edition 1/2, etc...

One to simply list every bird by type... for example, subfolders like
The second idea is to use my bird wiki library system which would sort the birds by continent/region and then type of bird. Yes, it means that a set like "Sparrows of the World" would get spread across the library but when you are looking for a sparrow for your European scene, it's going to be much easier to find. There will be some repeats since some birds are found on several continents.

So, I have three choices... keep it the same as it's always been with Volume numbers, Sort by Type or Sort by Continent and Type. Let me know what you prefer.

Contributing Artist
i don´t know what to say...all the ideas are nice ...one thing that i like is the mini -sets you have...because for me is more easy to buy what i want...but not sure if it work well for you!

CV-BEE
Yes, I like the mini sets as well, because that allows me to zero in on what bird(s) I want.

That said, it worked nicely when I was looking for Falcons to go with the Falconry Gear, however, I like the Type distinction. I don't know enough about birds, though I've certainly been learning more since you moved your store here to HiveWire, to consider separating by Continent, but I can see how it might just fit with others desires or need for certain birds for their renders.

CV-BEE
Contributing Artist
I like the option of having a fully formed bird in one click.
I'm torn between the Type option and Continent then type. On one hand if I want a kingfisher it would be easy to just go to Kingfisher folder, but if I wanted an Aussie one then Continent then type would be easier. But if they were by continent and you didn't know where the birds were from it might be frustrating to try and find.
You must log in or register to reply here.
Share:
Facebook Twitter Reddit Pinterest Tumblr WhatsApp Email Share Link
Top