skylab said:
Stezza....I tried re-installing Carrara through DiM and installed both versions of PostgreSQL, but Carrara is still failing to open...it blanks out quickly so that it never gets a chance to even show the splash. I did notice that Studio has updated again, so it's version 4.15 now.

ok
try removing any addon plugins and try again.. if that works then add one plugin at a time to catch the culprit..

do you use a pen tablet by any chance?

There's a Studio version of the covid virus here:

Yep, I already have done some way back at the beginning of last year and one near the end of 2020... think I put the car file for that last one on the wacky modeling thread I'll have to check... just checked and I didn't lol 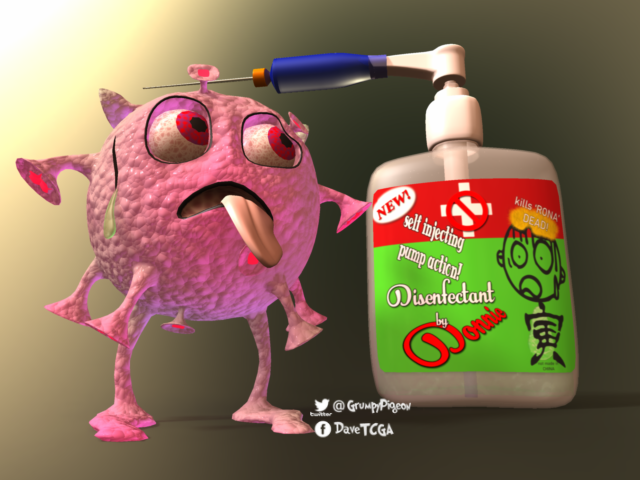 I probably thought no one would want a mutant virus at the time... with oozing gooo

As a matter of fact, I do have pen tablet software installed, but the tablet itself is only plugged in when I'm using it. Do they have a conflict with Carrara? I always had the feeling that my other Windows 10 workstation had some sort of USB issue, that the updates were specifically playing around with things like USB connections and even the use of hubs. I would love to get to the bottom of what was happening. The problem with Carrara now on the new workstation is like a sudden flashing out, failing to load altogether....double clicking on the icon, and it just blanks out, and goes back to the desktop, without the slightest effort to attempt to load.

And yes, you can always count of Linda or I being interested in the unusual stuff, like your version of the virus...haha 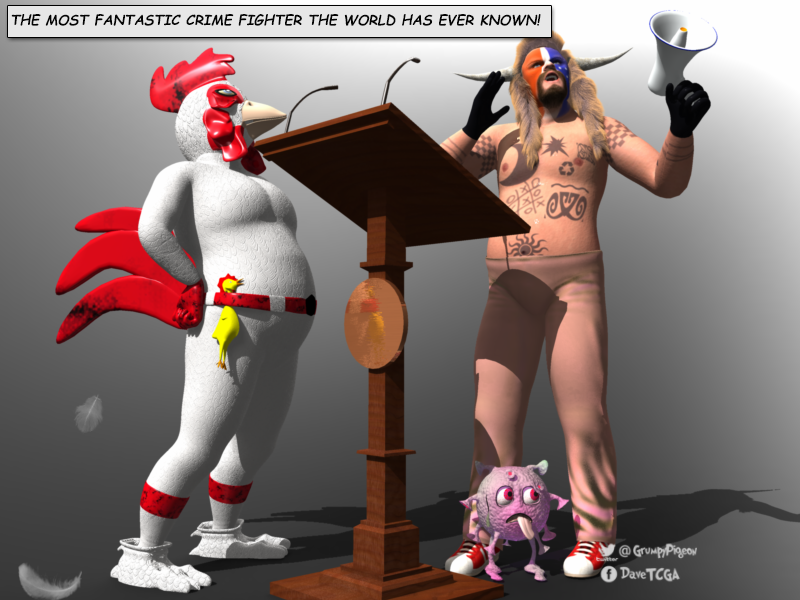 Thanks for the tip Stezza. I'll probably have to put Carrara on the older drive since I'll need my tablet functioning, but at least that saved me a good deal of time trying to troubleshoot it on my own.

And speaking of troubleshooting, I'll post this if it helps anyone. Flash support is being pulled, and of course this will affect older versions of Poser that used flash to display the content library. I noticed a question about this on our forum, so the workaround is this. I'm demonstrating this with Poser Pro 2014. Go to Edit -> Preferences -> Library -> Launch Behavior -> and choose External instead of Embedded -> then click OK and restart Poser. 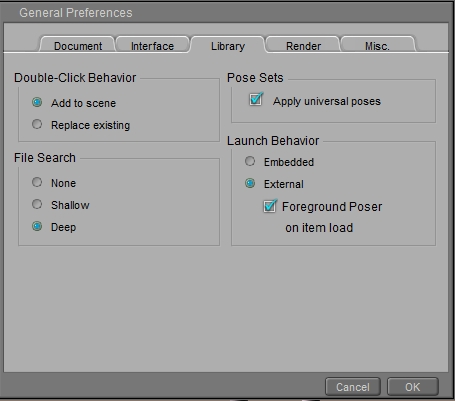 ....and once you restart Poser, your library will be displayed as shown below, no longer embedded on the right hand side, but rather in a separate window which can be minimized. This method also works with Poser 2012 as well. So, don't panic if you open Poser and see nothing but a flash symbol where your content library used to be. Also, XL Content Library for Poser by Dimension3D at Renderosity used to be a popular workaround for library issues. 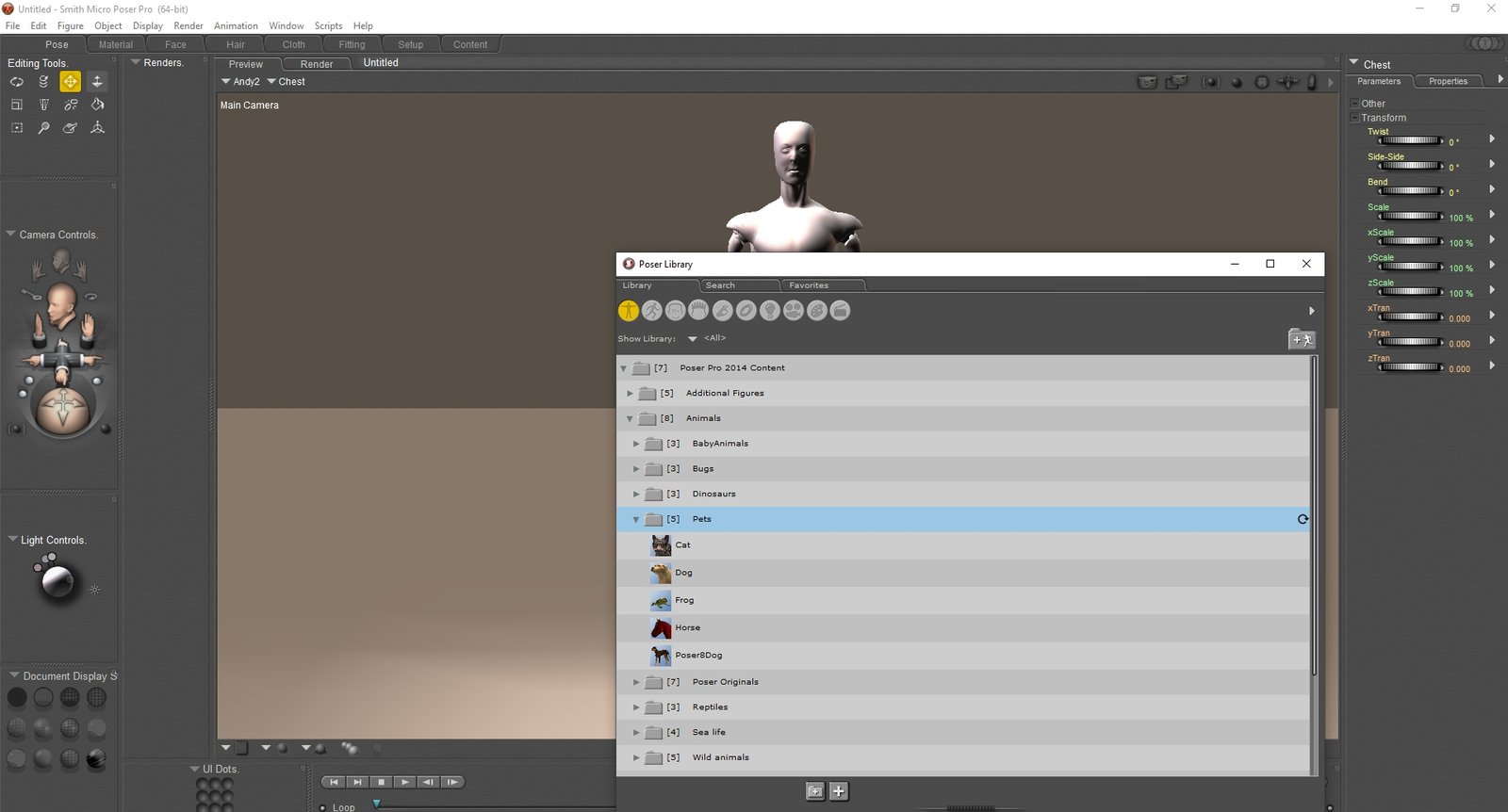 Chicken Man! do do doot do doooo! cluck cluck!

I forgot to mention here that the external library was only an option in the Pro versions of Poser. When Poser 8 was released in August of 2009, some of us were experiencing problems with the flash-based content library, and because we were having problems conveying that it was really happening, I created the disappointed Andy animation to demonstrate the issue on the Poser forum. So, here he is one more time, really disappointed at the loss. Users of Poser 8, 9 or 10 will have to use an outside library manager now (like XL Content Library by Dimension3D), as the Poser content library will no longer function with the loss of flash. The Pro versions will still have the feature to select the External library in the Preferences option, so they will continue to function, along with Adobe Air.

The Door of Your Heart by Kilroy

I hope we're getting closer to seeing a sable collie 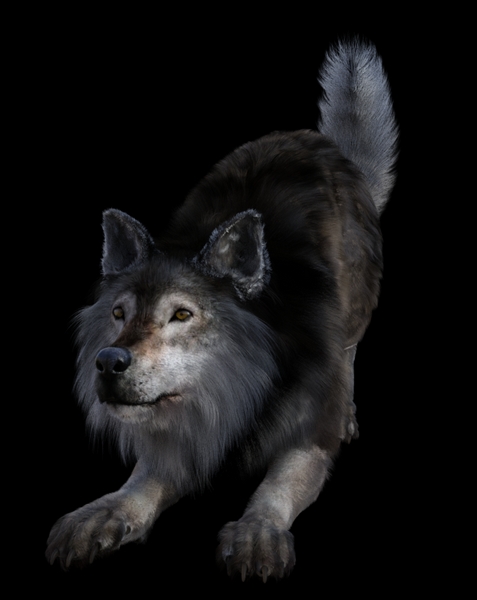 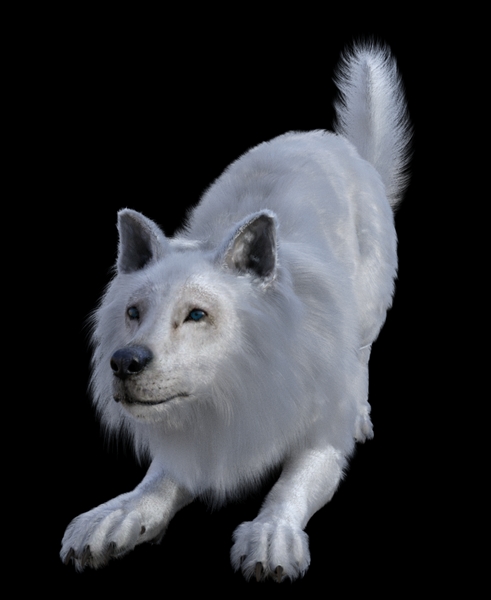 CV-BEE
Contributing Artist
If someone does a Rough Collie, I hope they make a Sheltie morph too (since they have the same colours)

Have always loved collies When I was very young, I was Lassie's most loyal fan. One winter when I was sick with pneumonia and could not get out of bed, my dad came home one night with a beautiful sable collie...he got it to keep me company while I was so sick...similar to this, only lighter markings. Sweet, gentle temperment, named Poco. 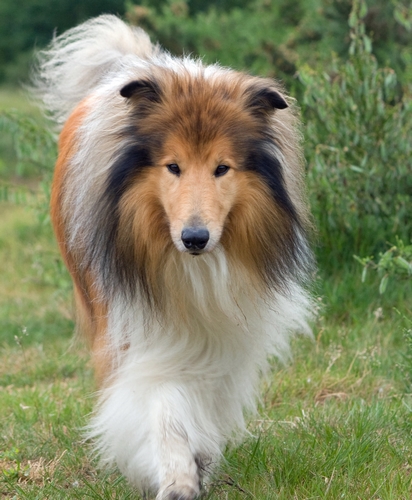 CV-BEE
Contributing Artist
My mum showed a Beagle and Shetland Sheepdog, Snoopy (of course, but his showname was Traveling Man) and Kim (Gay Swagger) whose colouring looked a lot like the Collie above

I use the white wolf tex when doing my 3d Tali, but I use it on the GSD dog morph. I'd also like some Border Collie texes. Had a BC/Spitz mix named Bandit (she had a black mask as a pup which disappeared as she grew older). Tali actually looks a lot like her except larger and definitely bigger ears.

Nightgown and Nightcap for G8M

Playing with snow renders in Studio 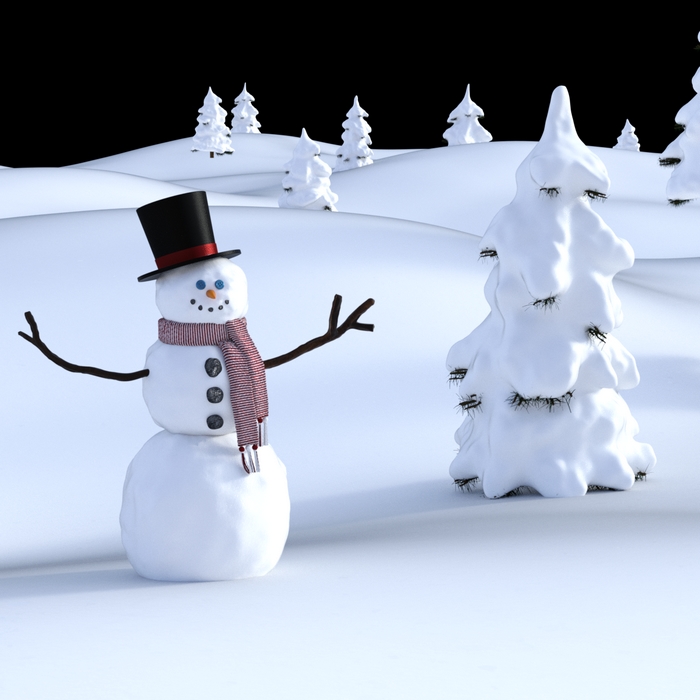 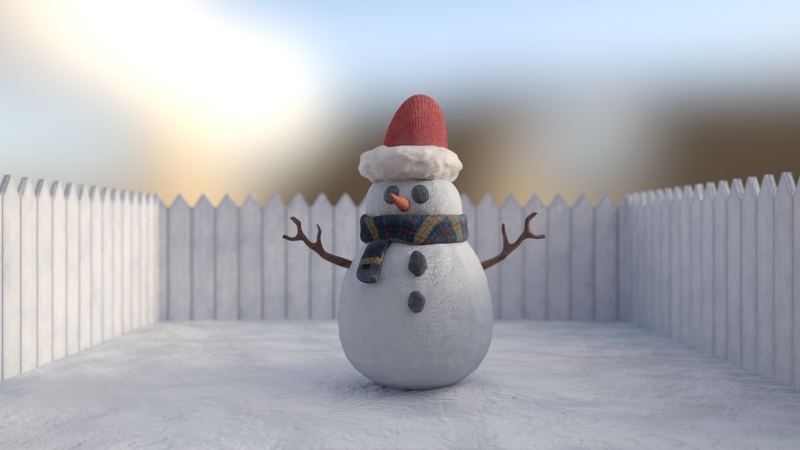 @skylab regarding Carrara and tablet. I have that problem with Carrara also. And yes, the problem is my tablet, have no idea why but if I want to start Carrara I have to have the tablet plugged in. I can unplug it after starting and close Carrara and it will restart next time no problem, until I restart windows, then have to plug the tablet in again for a first start. I had to figure this out on my own, as no one at DAZ had a clue when I encountered the problem (a few years ago).

Thank you so much for sharing that information about plugging in the tablet in order to get Carrara started. That's actually a lot better than thinking that I'd not be able to run it at all. I'll try it out this evening...reinstall Carrara and then plug in the tablet, and then see if Carrara will start. I can live with that, if it will work

I had already narrowed down the issues of my Dell workstation that kept locking up as being some sort of USB conflict, and it would reappear with a vengeance every time there was a Windows 10 update. I tend to separate my data according to type, on a variety of external drives, so sometimes I have to use a hub if I'm accessing several external drives at one time. I found that especially with the hub, Windows 10 would freeze up every 10 minutes or so....I'm not sure why it would work perfectly for awhile, and then roll over and play dead, but it was doing that repeatedly. Probably some sort of data conflict. When it worked, it worked fine. It was just the type of problem that drives me to the edge...since if it works, why doesn't it work all the time (?) So I'm thinking with more time and experience, I may come to understand how to manage it as well...so I didn't trash the drive....just leaving it sit for now so that I could quit wringing my hands over it. I have to admit I'm enjoying the HP i7 with 32 ram...much more peppy than the Dell. Since the juice is there now, I had wanted to use my tablet some, and also set up a decent webcam for communicating while sheltering. So again, thanks for the Carrara tip....I'll test it out and share the results. It might help if DAZ support knew about the graphics tablet issue as well.

Edit to add: It occurred to me that there was a similar issue with Adobe Painter Essentials 4 and graphics tablets, plus Net Framework. Apparently it was still a problem in 2015....this type of problem could be what gives the appearance of a Windows 10 update bug....hmmmmm. Might be getting close to diagnosing the problem.