CV-BEE
Contributing Artist
do we get a sneak peak? the ones you shared on FB looked nice but you got them in a different colour didn't you?

I put my curtain rods, curtains and tie backs... looking better in the bedroom...

Contributing Artist
So as I've been mentioning here and there I'm back to work on getting the brother and sister team of Bruno and Bruna finished. I've been really trying to find the best shapes for Bruno and I'm about there. Think I'll keep at it with the face as the PURE Bruno face still looks too caveman to me. So this is a MIXED version of Bruno which I will probably add in as a preset. Goes something like this... Varying degrees of the following morphs:

So this is the plan... while Bruna will get allot of makeup options she will only have a couple of body shaping options. So to even things out a bit more Bruno will come with quite a few faces and body morphs. My plan from the beginning was to support Dusk solely but there is some truth that the gals sell better, esp skins so I'm trying to support both, equally. So each release there will be a male and female. Lets see how long I can keep going with that idea! lol 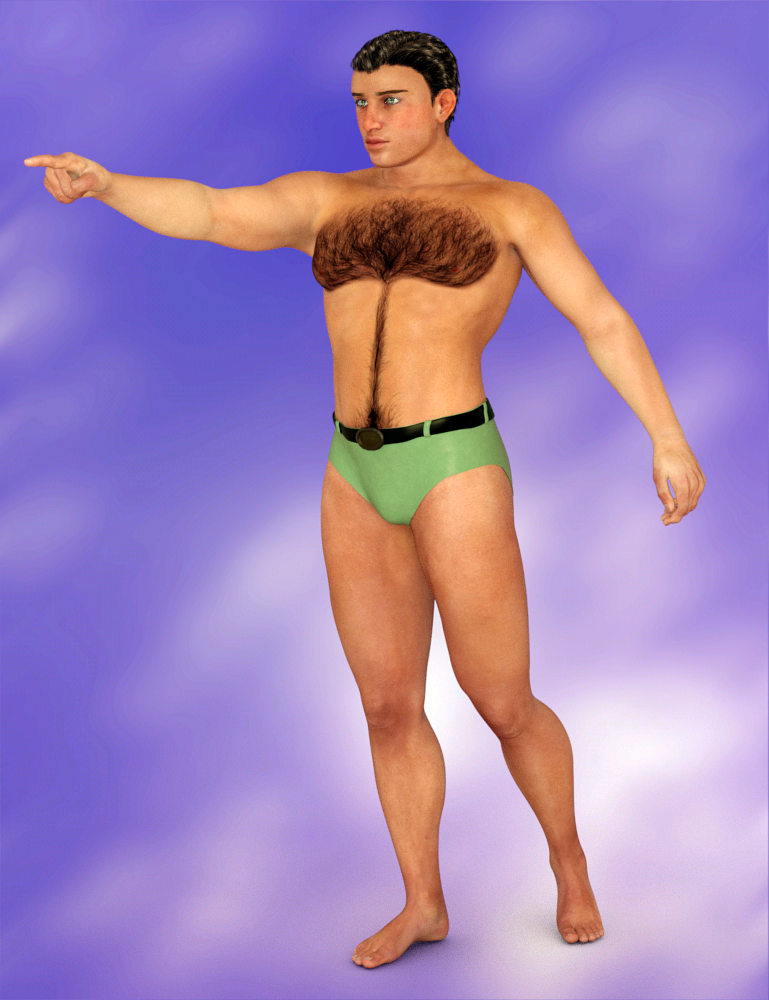 RAMWolff said:
Dug out the Supersuit set today to play with it a bit more. Got allot of morphs done for the soft boots, material zones in place for the suit itself and got some mats made for it, got the gloves fitted better and did a couple of morphs for it to fit it over the Supersuit and low and behold got my old cape project back out, haven't messed with it since Genesis 01 but now it's officially for Dusk (and probably Dawn). Took it into ZBrush and revamped it's shape and got it fitted nicely to Dusk. Not sure if I wanna play with the conforming idea again for it though since that was like the BANE OF MY EXISTENCE back then! lol Might have better luck now, not sure, still thinking about it. All the morphs work great and all my detail morphs (there are three of them for various wrinkle effects).

Ramwolff, was this released for sale on any of the online stores?

CV-BEE
I just checked RAMWolff's store here at HiveWire, and I don't see it, so I'm not aware of his finalizing that project.

Thank you Miss B! I am hoping to add some new blood into my Daz Studio catalog as well as give me a reason to pull Poser back out.

CV-BEE
You're quite welcome. You could try sending Leo Lee and RAMWolff PMs here on the forum. Just click on the Inbox link at the top right, and start a "conversation" with each of them.

I don't know how often either of them are here on the forum, but if they have Notifications set up to receive an email when someone sends them a PM, they'll come see it.

Thank you, I will try that!

Contributing Artist
Frustration in Poser. I have finished up the Rings&Things project, in beta testing now.

So then I'm back to getting Tommy and Tina ready for the store (Poser versions) but I got side tracked and I really wish I hadn't. SIGH... now I understand why so many give up on making stuff for Poser, it's really frustrating for some of us that are just not technical or older with issues remembering steps.

So here it is. I have a tank top, I made it in ZB, exported fine, set it up in my UV program. Added in my material zones and all that. So import it into Poser, I had also made quite a few morphs for it, as a PROP the morphs come in fine and work as they should but Poser discards those when you use the Fitting room to get a quick and dirty fit. After that the morphs import but they no longer operate.

My next try was opening up DAZ Studio. Did all that all over again, added in the morphs and they work fine in DS after the fitting but when I saved it out as a CR2 and exported to my Poser 11 library the file loads but there is nothing in the scene. it's there but it's invisible. I checked the paths in the CR2 and aside from the PMD having to be moved to the Geom folder and the paths changed, the file loads and is not seen in the Poser viewport.

Any ideas of what to try at this point? I'd rather have info rather than "send it to me and I'll fix it" as I don't learn like that. I need info not someone fixing things for me.

Thanks so much
Richard 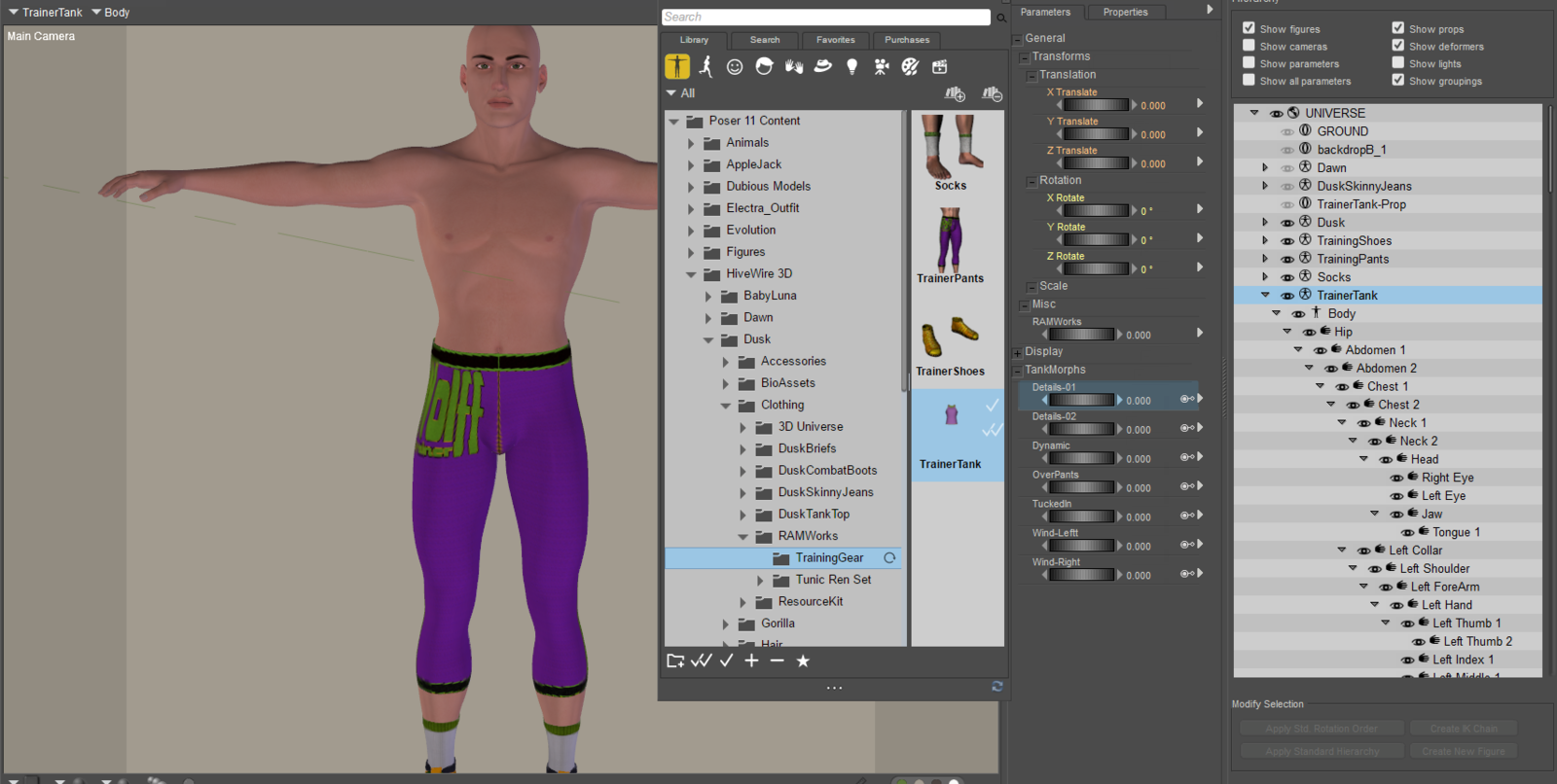 Contributing Artist
The reason the tanktop morphs wouldn't work after using the Fitting Room in Poser is simple - unimesh! You can resolve this by grouping the shirt elsewhere where unimesh is supported, and ONLY then use the Fitting Room while disabling auto-group. After this, save the CR2 to the library, then DELETE the new OBJ Poser has created, replacing it with the original that was grouped elsewhere.

We should NEVER-EVER let Poser auto-group anything because, from that point on, your OBJ will no longer be unimesh. All this will be a thing of the past once Rendo releases the unimesh Poser version.