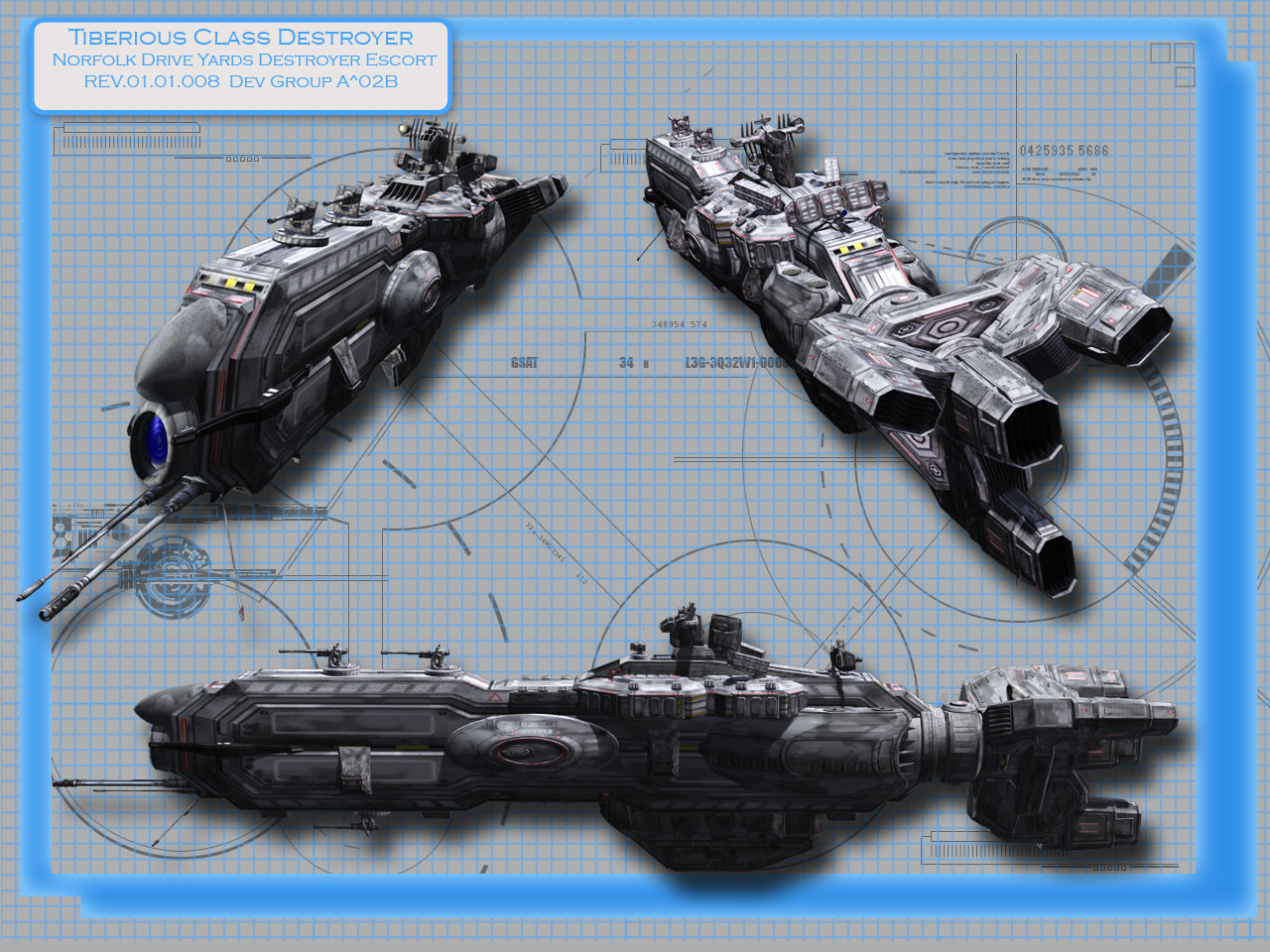 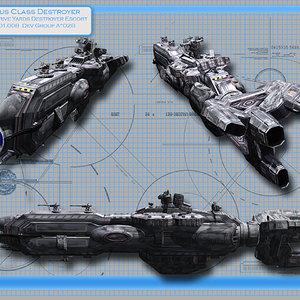 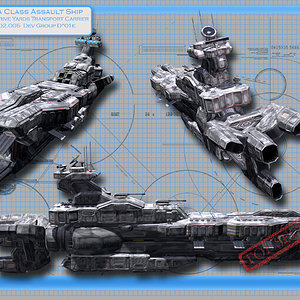 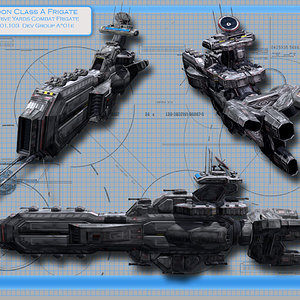 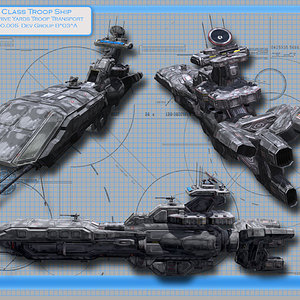 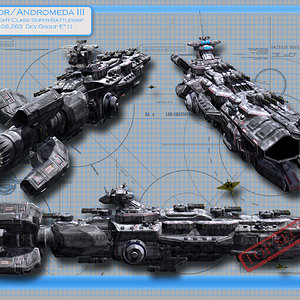 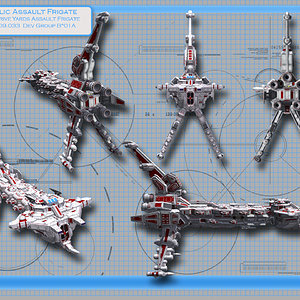 60 Officers, Crew, and Gunnery personnel operating in three shifts, plus 1 full platoons (25 men) of Colonial Marines as ships security. The Tiberius' interior is what one might expect of a combat vessel - very cramped, ugly, noisy, and very grey. The Crew are assigned in bunked billets, typically four to a room. Each room has a single closet that must be shared, and enough space for each crew member to also have a single foot locker of personal items and belongings. Each room also has a single wash closet which is shared. The rooms are staged end to end, creating coridoor like runs running parallel to a central hall on port and starboard sides. Each deck has a single shower block, cafeteria that doubles as the recreation room or social room when not serving meals, and a single physical fitness room. The officers quarters are larger, with two in a room, in bunked billets resembling a college dorm room. Each room has independent, private lavatories. There is also a separate Officers mess, recreation room, and small weight room. The billets of the on-board marines is much different, with the marines being housed in large group rooms more reminiscent of a cargo bay lined with double-decker bunks. Each such bay houses 12 men, with each man being allotted a single footlocker of space for personal effects. Each of these bays also has a group lavatory and shower, as well as a weight training space and lockers and equipment racks at the far ends. The marines weapons are stored in Weapons lockers in the bays, with the officers and Non-commissioned Officers having proper clearance codes to access for rapid deployment if necessary The Vessel also maintains a PX and Commissary on the primary cargo and munitions deck that is accessible to all crew. A Tiberius class Transport maintains a small launch bay landing craft, launches, a shuttle, for the purposes of cargo and personnel loading and unloading. On average a Tiberius also maintains a compliment of nearly a dozen Utility A.P.U.s for maintenance, repair, and cargo handling. Special assignment Tiberius destroyers may have a compliment of combat A.P.U.s for
close support operations, defense, and boarding actions.

HISTORY:
First entering service in the mid 2100s, at the onset of the Binary Wars, the Tiberius was a revolutionary design for the time. Plans were laid for the rapid construction of numerous ships filling numerous roles. Tthe Norfolk Drive Yards invested in massive, modular production lines and a level of collaboration between their design teams that was unheard of. As with many ships of this era to come out of the Norfolk Drive Yards and her sister yards, the Utah has visual similarities with other ships and classes. The Most notable feature of most of the small to Mid sized capital ships is it's use of the ubiquitous Herkimer reactor core and triple Worchester-V21 Engineering subsection. In fact this reactor and engineering section was first designed for the Utah Troop Transport, and performed so well it became a mainstay of the new modular design theology of the Norfolk Drive yards. The Tiberius Class was developed in tandem with the Utah Class, and also featured the same fairly sophisticated Communications and sensory as the Utah. This array could overpower much interference and jamming at close range and insure easy and reliable coordination between other vessels in it's support group and it's deployed ground assets. The intent of the Tiberius was to be a fleet tender and escort to support and defend the transports. The interior design and layout of the Tiberius is very cramped and crowded, and might resemble the interior of an old Submarine. These were not designed or intended for long term deployments.

Prior to the construction of the first Tiberius Destroyer, the E.O.C., which had been very much relegated to a background governmental role not even considered an authority by Corporate colonial govenors, had been using refit and reinforced cargo freighters as warships. These vessels lacked any staying power or survivability in a combat engagement against a well armed force. Most interstellar conflicts had been with pirates, raiders, and a few vagabond non-terestrial species. Combat was often in high orbit or on the ground, with aerospace fighters and traditional ground forces performing the brunt of the fighting.In the years leading up to the Binary Wars Humanity came into increased conflict with an Alien Species known as the Kro', who had vastly superior space combat vessels. Fortunately these skirmishes were infrequent, but when they happened they were devestating - and the need for a cosmic navy became apparent. The Tiberius class ushered in the true return to a naval mindset for the E.O.C. and was a ship designed first and foremost for war. The Tiberius was planned as a pack hunter and a fleet escort, and intended to operate in a supporting role of troop transports and the slow and cumbersome battle barges that would carry heavier firepower. Easily able to outmaneuver the retrofit battle barges, the Tiberius made for an excellent picket craft. The Tiberius multi-role capabilities would earn it a place in E.O.C. fleet rosters for a long and distinguished career that would carry this class into the Corporate Insurrections.

The Tiberius class destroyer saw many variants that were constructed and sent into military service in the nearly 200 years since it's initial design. It has seen more than its share of modifications and tinkering for new roles, or to adapt it to modernized technology. While it's production run has been ended, so many of these vessels exist that it is still in wide service with planetary militias and mercenary units. Many variations exist for the Tiberius thanks to Norfolk Drive Yard's modular design theology of the era. While the Tiberius has been replaced by the Takei Class, it has proven itself in combat time and again. It has been in service for so long, with so many ships retired from damage or lost, it turns up even among pirates. In these cases it inspires fear among civilian traffic, and even gives planetary defense forces pause.