CV-BEE
I know, birdies I can't wait to get my hands on.

HW3D Exclusive Artist
I'm finally clamping down the Firefly version, removing the last of bugs and tweaking materials... that means I'll be moving to importing it to DAZ Studio and getting that version under way very soon and hopefully in the store by mid-August.

Here's the Congo Peafowl with the spiel I wrote from my Rendo gallery post...

When people think of peacocks, a picture of the huge wispy fan display of a hundred eyes comes to mind. Few (except for bird nerds like me) know that there are actually three different species of peafowl in the world and while two of them do have those spectacular displays, the third type looks much more like a grouse or guinea-fowl.

The Congo Peafowl as one might expect is endemic to the Congo Basin. It occurs in both primary and secondary forest in Salonga National Park. It is classified as a "Vulnerable" species with its wild population estimated between 2,500 and 9,000 adult individuals. It is threatened by habitat loss caused by mining, shifting cultivation and logging. It primarily eats fruits and insects.

As with all peafowl, it is sexually dimorphic (meaning that males and females look significantly different). It has physical characteristics of both the peafowl and the guineafowl, which may indicate that the Congo peacock is a link between the two families.

Both sexes of this peafowl somewhat resemble immature Javan peafowl; so much so that early stuffed birds being erroneously classified as such before they were officially designated as members of a unique species. This is the national bird of the Democratic Republic of the Congo.

Rendered in Firefly without any postwork. Models include my Kiwi Burrow and Peafowl of the World. 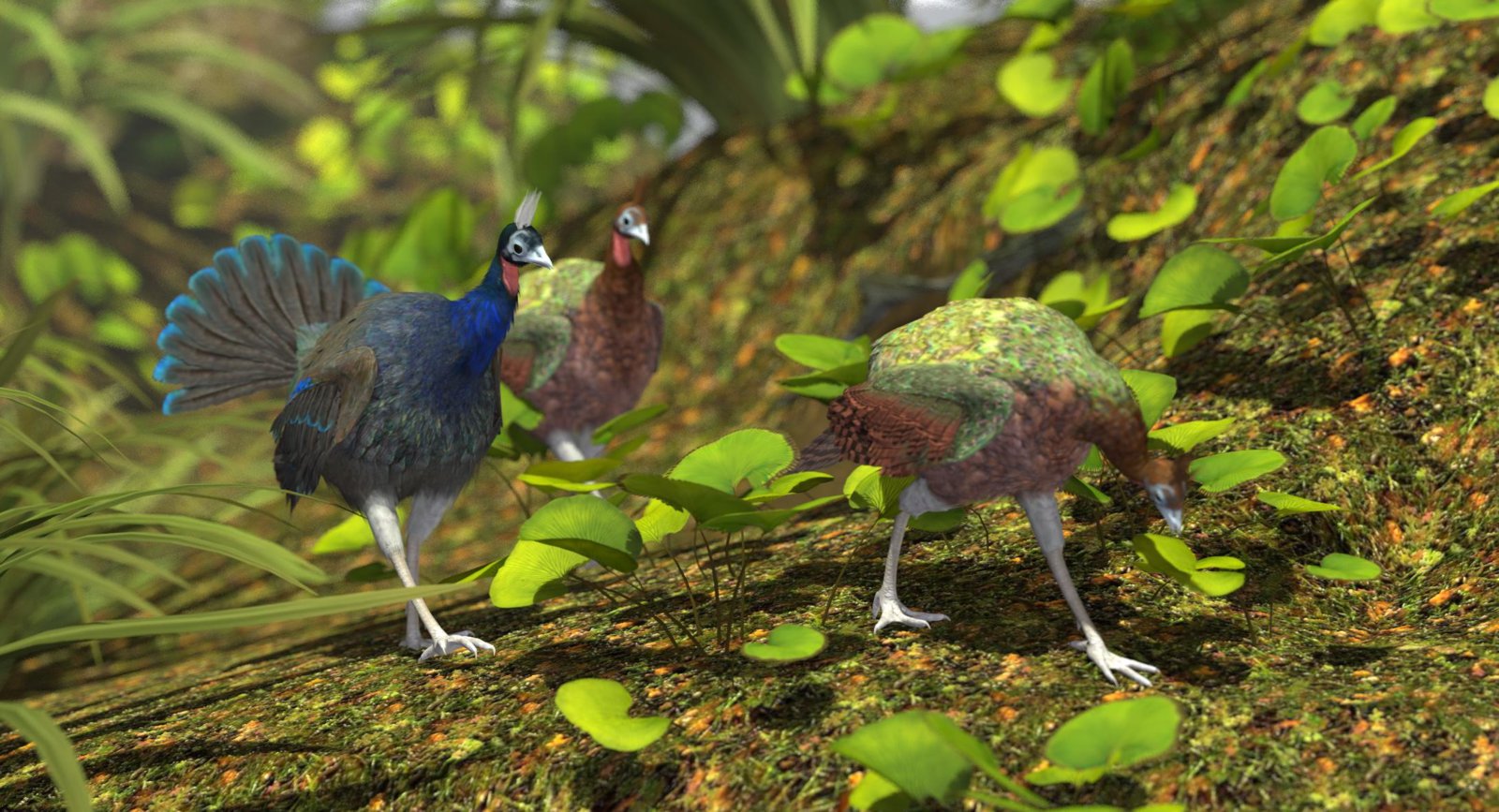 HW Honey Bear
Am definitely looking forward to them.

CV-BEE
That makes 2 of us JOdel.

Three .. you can count me in. I'm totally in love with this birds.

HW3D Exclusive Artist
For those looking for my Peafowl progress, the Poser version is pretty much done but I've run into some wing rigging issues on the DS side I'm trying to resolve. Don't worry, I'll figure it out

CV-BEE
Whoa, that's pretty hard to imagine. Then again, a lot of animals around that era were much larger than their counterparts (if they exist) are today.

Poly wanna stay away from me?!

CV-BEE
Contributing Artist
That's pretty odd. Aren't quite a few birds carnivorous? In that they eat insects. Which are meat.

And parrots will eat both meat and vegetation.

/slinking away from the soapbox.

Reminds me of what I've heard referred to as the "beady-eyed" vegetarians. They'll eat fish, or poultry, or other things with beady little eyes, but not mammals.

CV-BEE
I never got the whole vegan / vegetarian idea. I like all kinds of food, and just don't see the point of never eating meat. I happen to prefer chicken, turkey, fish and seafood better than some meats, but give me a good medium rare steak, and I'll eat it.

HW3D Exclusive Artist
Knowing my 11" cockatoo's behavior and mood swings, a thought of a 3' parrot looking at me as a meal or something simply fun to peel, terrifies me. lol

I had an eccentric art professor in college who showed us auras that plants projected and did the infamous lie detector tests that Cleve Backster did to plants. I did witness the plant seem to get agitated when the professor threatened to pull it out by the roots. As the scientific community has pointed out, there are reasonable alternative explanations for that-- but the demonstration was compelling nonetheless and probably vegans would not want to think about.

On the off-kilter plant topic... Plant Auras – Lost and Found In Nature
---

Thanks to some help from Paul, we've resolved the DS rigging roadblock, so I'm now approaching the challenges of getting my peafowl to sparkle in 3DL and Iray. Thanks, Paul!

First, an Iray render of the Javan Peafowl 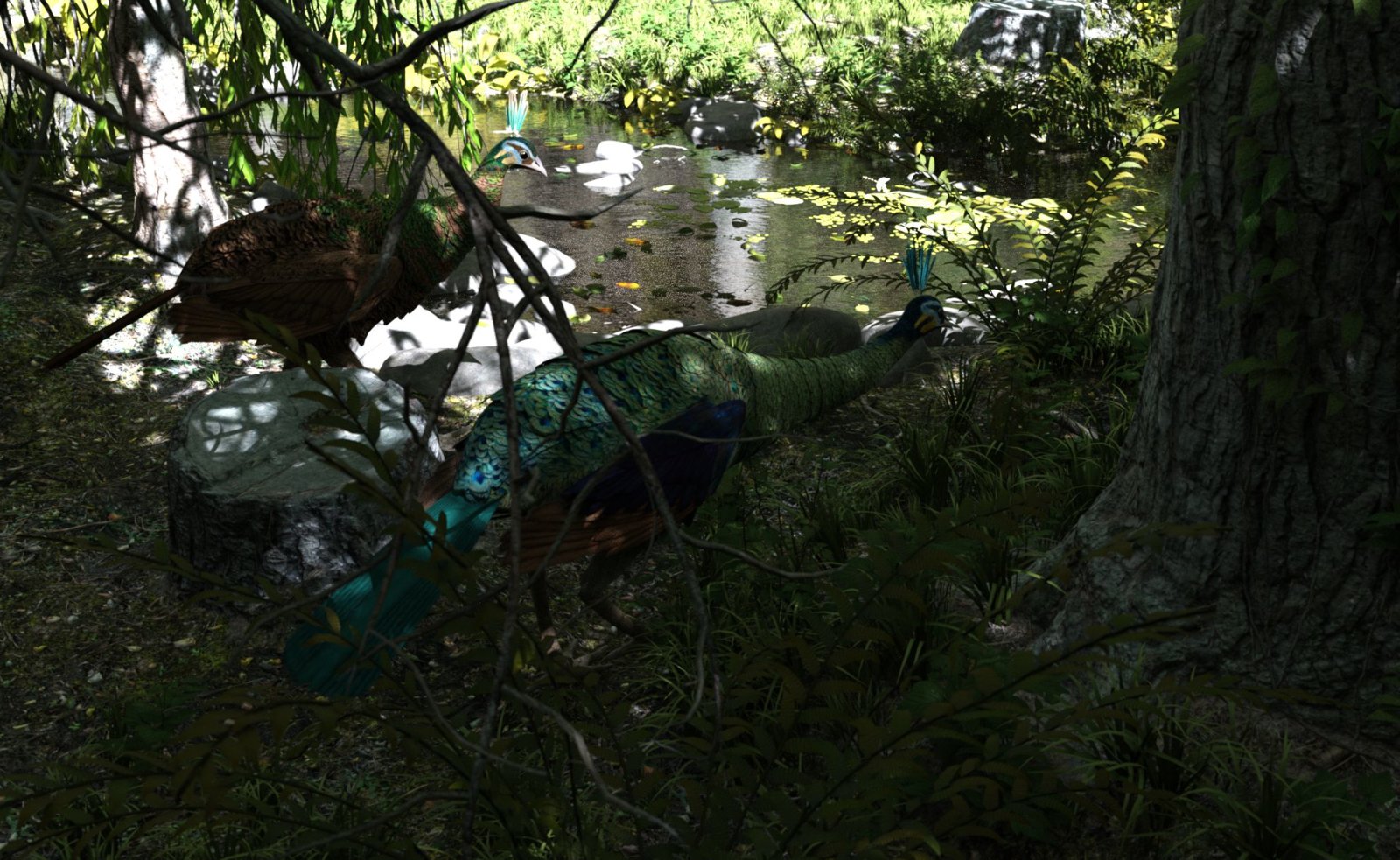 CV-BEE
Stunning Ken. I am sooooo waiting for these to hit the store.

HW3D Exclusive Artist
thanks... I've have most of the Iray version complete and am working my way through 3DL, then doubling back to Superfly. My progress keeping getting stalled by finding little issues in the model/rigging and adding more morphs as I start really using it in renders. I originally thought it would be released mid-August but it's looking more like the end of August now. My time will be really limited starting next week as I start a non-peacock job for the next month or so.

HW3D Exclusive Artist
Here's some Spaldings in Iray. Again, spaldings are a breeders cross between the Indian Blue Peafowl and the Javan Green Peafowl. This will be part of the add-on set called "SBRM Peafowl Variants" and will contain 3 types of spalding (the most common pictured here), the Bronze (all brown) and the Pied (common coloring with white patches). It will also have the leucistic (white peafowl). All types will have breeding male, non-breeding male and female characters. The main package is called "SBRM Peafowl of the World" 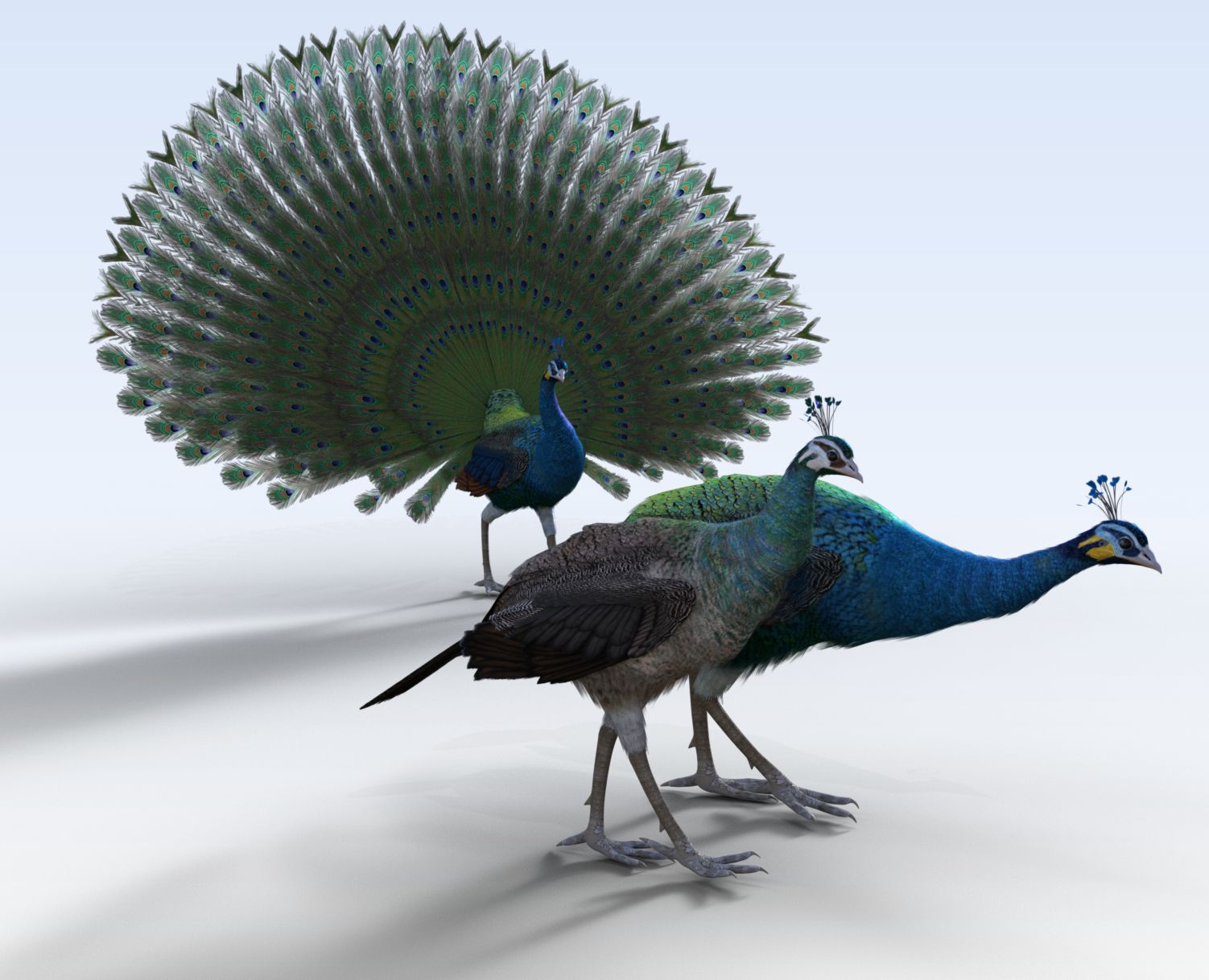