of course I rendered this in Carrara.....

anyways just a bit of fun for all... and testing out your knowledge/memory

Contributing Artist
I've got the easy ones: Batman and Beverly Hillbillies. And Thunderbirds, I assume?
Not sure about the others. Is there a Johnny Quest thing there?

Thunderbirds, Beverly Hillbillies and Batman are the pretty obvious ones.... then it may start to get harder
You are thinking along the right lines for one of them..

Clue time: here's a theme clue for the two that comes from one show... but which two

CV-BEE
Contributing Artist
I thought the front left one was from the Jetsons. I got Batman and Beverly Hillbillies too. 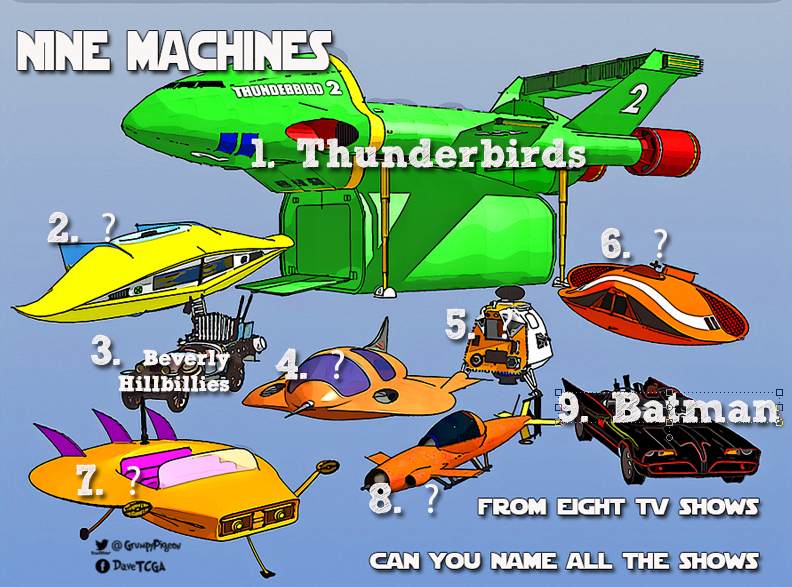 I too thought of the Jetsons when I saw 7 at first.

CV-BEE
Contributing Artist
Well my hubby was on the right track with no.7 he said it looked like it was something from Hanna-Barbera

A few more have been worked out ... over on the Carrara Board...

so between here and there there is one ( No.4 ) elusive machine yet to get..
Clue - cartoon series in the mid 60's 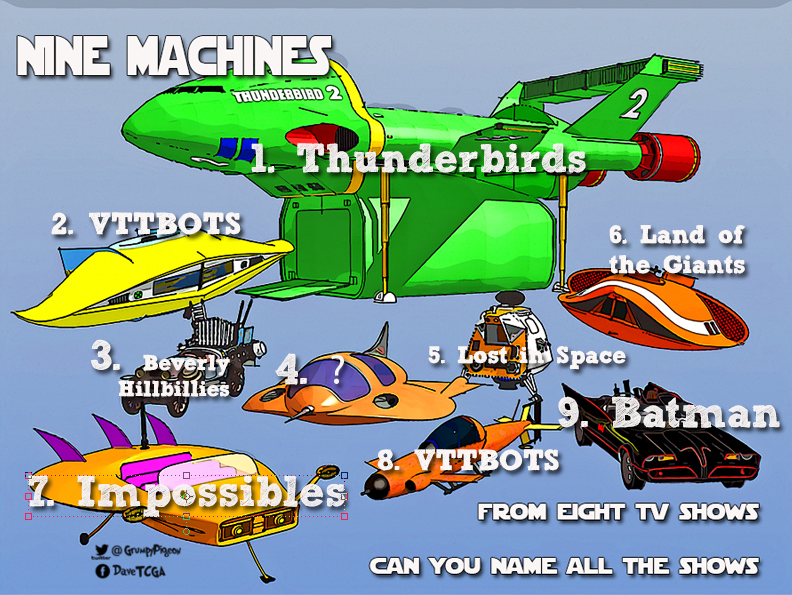 QAV-BEE
I was thinking #4 was Jonny Quest. I can't think of any other cartoons that far back anymore. I was between the ages of 10 and 19 in the 60's so that's a big gap!!

Now that I look more at #8, are you sure that's from VTTBOS? I like #4 since it has the little round viewports on the front for looking out while they're under water. #8 has the look of a land base vehicle. I'm probably wrong, but that's just my opinion.
Last edited: Feb 10, 2018

I modeled that a few years ago, it was probably the least seen sub in the series... after the flying sub and the dive bell.. 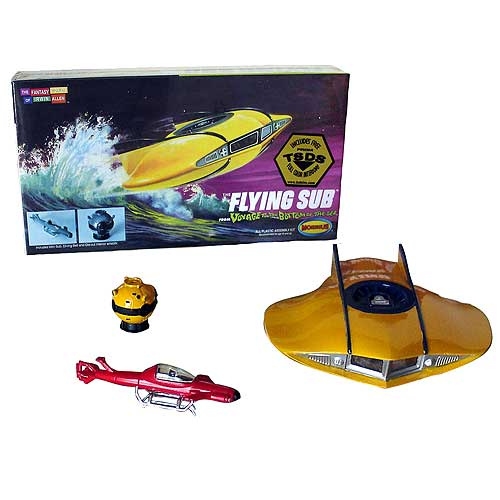 Number 4 is stumping everyone...

I did do a render of it and posted it in the 'I just wanted to post an image' thread... can't remember which page... but the answer is there lol

clue: it was one of the first color anime cartoons to be shown in a dubbed form in the U.S., and later in Australia and the United Kingdom.

QAV-BEE
Ok, I'm pretty sure I know what it is but don't want to post it here. I'll PM you. 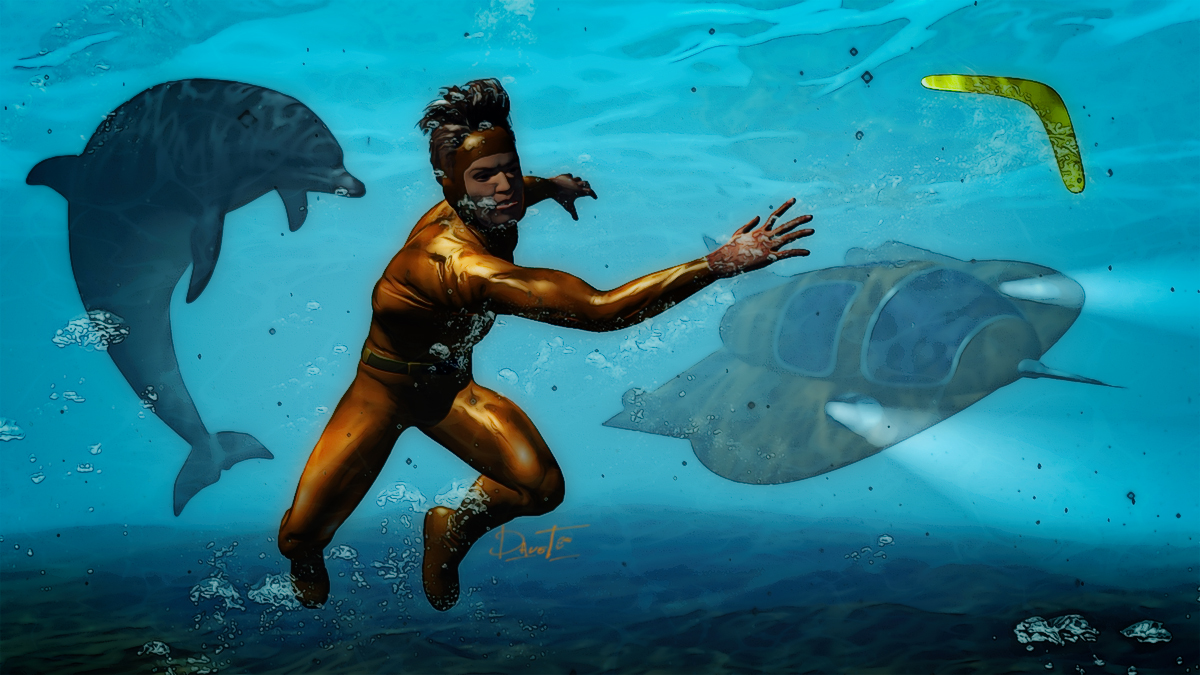 Wellllll, don't keep it a secret!! Do tell, as curious minds want to know!! 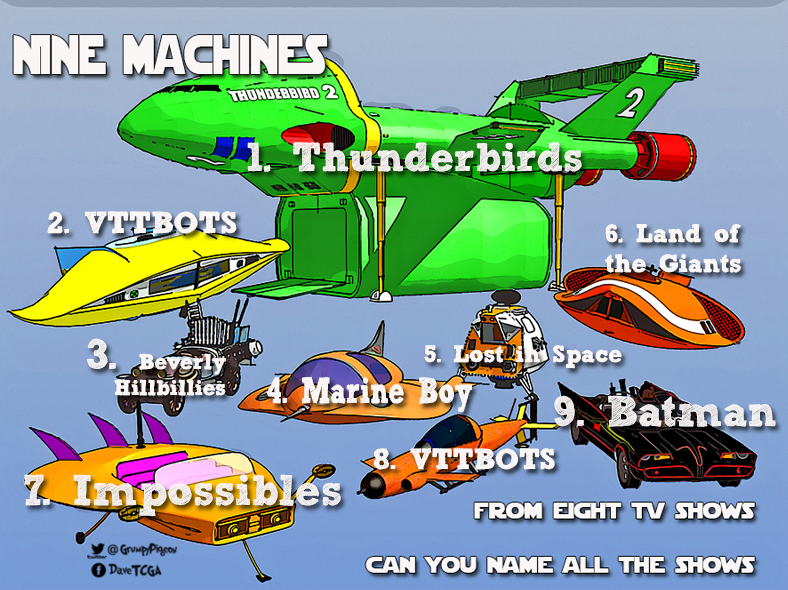 Ohhhh, see now I never would've guessed that, as I don't remember it, not that I recall VOTTBOTS either.
R

Noooouuuuu! Me too... I loved The Impossibles but thought of The Jetsons for n°7 instead.
Just got the Batmobile and Thunderbirds (maybe because of the writing on the vehicle).
Well, at least I could tell about this when people thinks I watch too much animation... ;-)
You must log in or register to reply here.
Share:
Facebook Twitter Reddit Pinterest Tumblr WhatsApp Email Share Link
Top