Contributing Artist
NO, you don't sound like a 13 year old boy!! Excellent tutorial voice I would say. Easier than I thought it would be for sure.
I'm itching to give this a try and see what I can come up with, and WOWZA !! That alt UV is very nice for texture zones!!

Ok, going to watch it again!

Pendraia said:
Just watched it...you're really clear and concise. Great job! Is there any way blender can be used to create alternate uv's from say v4 to Dawn for personal use? I know I can't do it for distribution...
Click to expand...

Are you thinking clones Pen?

Contributing Artist
No alternative uv's so I can use V4 textures within DS without going through Texture transformer. You have to match the uv's which is really time consuming. I just updated my UVLayout so I could relook at this but Blender uv's looks to have a lot of functionality and might even be worth learning if I can do it in Blender more easily.

If I can get one done...I could then look at things like genesis etc., but it would have to be personal use only.

Clones are to do with clothing and followers not textures...; )

Contributing Artist
Ok, I see where you are going with that.

@Sparky , is it ok just to import the object? I don't have a morph set as of yet it's just a stationary object no rigging .ect?

Contributing Artist
Thanks, guys! I hope it proves helpful. ^.^


Pendraia said:
Just watched it...you're really clear and concise. Great job! Is there any way blender can be used to create alternate uv's from say v4 to Dawn for personal use? I know I can't do it for distribution...
Click to expand...

Since V4 and Dawn have different vertex counts and orders, I don't know how it would be possible to transfer the uv mapping from one to the other. I've only done that sort of thing in the past by manually re-uvmapping them.

I usually use Blender to assign seams and ZBrush to unwrap and refine them.

@NapalmArsenal, that will do just fine! Using an existing obj just eliminates the need to export one. lol

CWRW said:
Great tute Sparky!!!! And LOL yeah I HATE the way my voice sounds in my vid tutes
Click to expand...

Think the technique will be useful for the problem you were having with the mule deer texture?

No one likes their voice - it sounds different when you hear it than how you hear it when you talk. You sound good and quite female to me, not like a 13 yr old boy lol

Contributing Artist
Alright, I have a scaling issue LOL as Spot is more akin to Godzilla. So I may import to Daz change Poser scale to Daz scale and then re export should be a smaller scale size. Will try again as I do know blender has the scaling options.

Contributing Artist
Actually, that sounds like DAZ scale. Poser scale is much smaller, I think 1 unit is 8 feet (WEIRD!) whereas DAZ scale is 1 unit = 1 cm. So in Poser scale, a 6 foot model would be 0.75 units, and the same model in DAZ would be 182.88 units. In the video, I used DAZ scale, and you can see how she towers above the ground plane.

I actually like having the model oversize for uv mapping sometimes. But obviously, if the model is exceeding the clip distance of the camera, or making the camera unwieldy, it needs to be smaller.

You could always export it at Blender scale ;-)

Think the technique will be useful for the problem you were having with the mule deer texture?
Click to expand...

Was thinking of it more for the big cats with big foofy tails The Cougar for one...

Contributing Artist
Well if I import him at Poser Scale into Daz the main veiw screen is the space between his feet. If I convert to Daz scale he is about the size of Harry using the 1 unit = 1 cm in Daz.

Have it sorted now just had to find how to scale him using the Blender scale. I would send screen shots, but since that last Win 10 Update it won't let me do them. 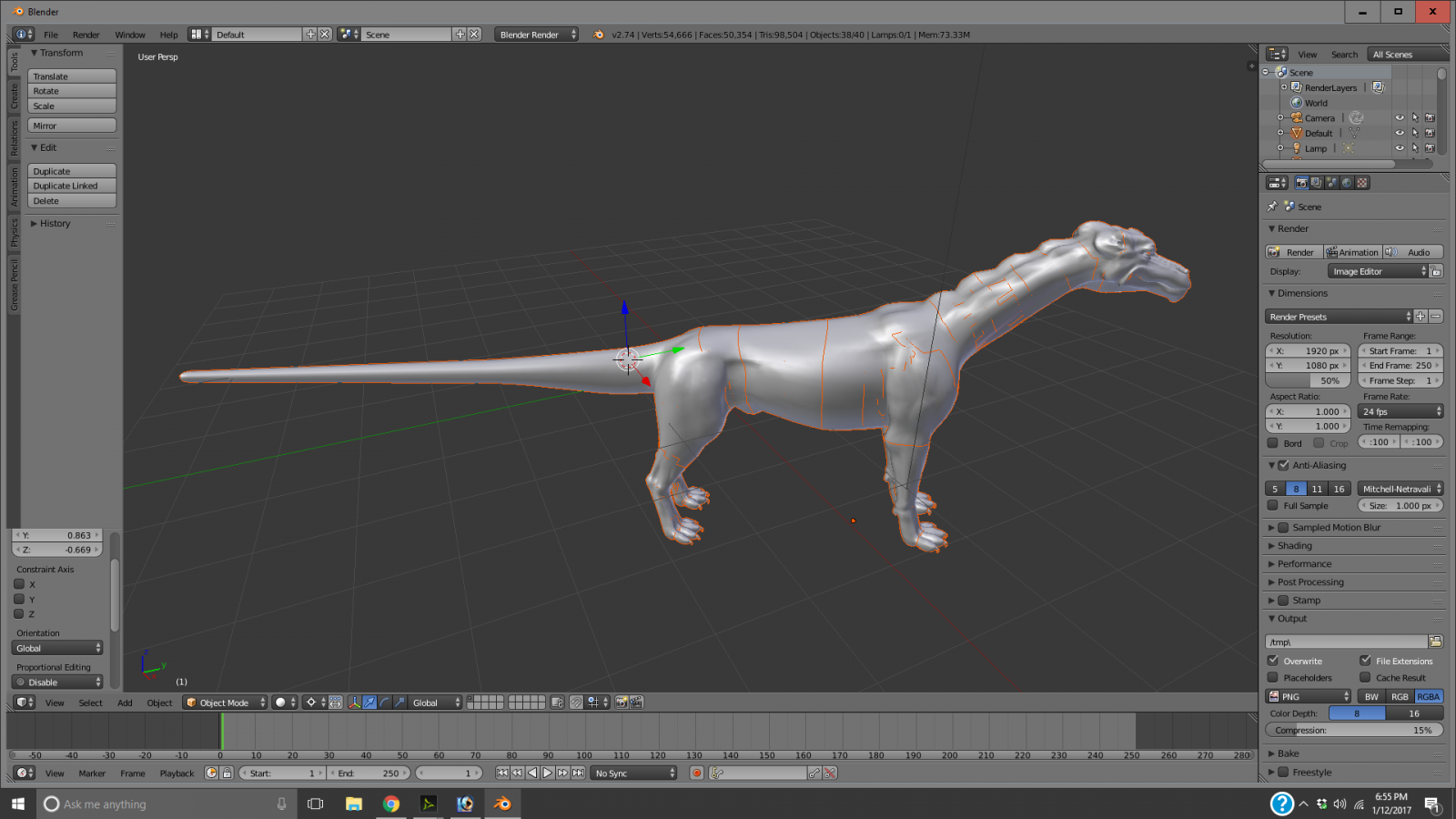 And there we go!

Contributing Artist
I really want to do his tail as it's the most stretched so let me see if I can do that, or should I start with the face?

Contributing Artist
You can start with whichever island you like. I do recommend saving a *.blend file, to keep your seams marked in Blender. Otherwise you would have to mark them every time you open/close the program.

Contributing Artist
Blender used to have a script included that marked seams from uvs...I miss that script.

Contributing Artist
I will give it a shot and see what I can do. I'm not real familiar with where everything is in Blender and admittedly probably should have spent more time with it as I have had it for some time, but got Curvy 3D and have been doing things in there. So, it's probably taking me longer to find things and apply them than someone who is more familiar with it.

Contributing Artist
Sorry had to share this Gozilla scale.

Sparky said:
Since V4 and Dawn have different vertex counts and orders, I don't know how it would be possible to transfer the uv mapping from one to the other.
Click to expand...

It has been done for Genesis figures, so it should be possible. The main problem would probably be material zones, though, as for V4 to G3F conversions.

Leana said:
It has been done for Genesis figures, so it should be possible. The main problem would probably be material zones, though, as for V4 to G3F conversions.
Click to expand...

If I'm not mistaken, the genesis figures have been based on the Unimesh figures (V4). So, they may have simply retained the original uvs, or remapped them by hand to match. I didn't mean to say that a model cannot be remapped to use another model's textures, I have in fact done so myself. What I meant was, I don't think there is a way in Blender, or any of the other tools at my disposal, to handle such a remap automatically.