Another cutie to play with! Things just get better and better!

Contributing Artist
Glad you like her Mythocentric...I've got some holidays coming up in a week's time and I'm hoping to get a few projects finished. This and the morph for Sora are on the list...

So pleased to hear that, Pen...both the holidays and the projects

Contributing Artist
Me too! I'm seriously reevaluating work at the moment. I've been talking to my husband about going down to 3 days as a casual relief teacher but I have to resolve some issues first.

When you start having feelings like that, it's usually a sign of impending change. My fingers and toes are crossed for you

Contributing Artist
Yeah...I may yet see it out until the end of the year but I'm getting to the point that I want to work closer to home.

Contributing Artist
So I upgraded to Poser and it makes it much easier to create injections and I have a working injection file for Deidre and her ears. This is a firefly render as when I try to do a superfly she's all black except inside her mouth.
I still need to work out what I'm going to do with the body... 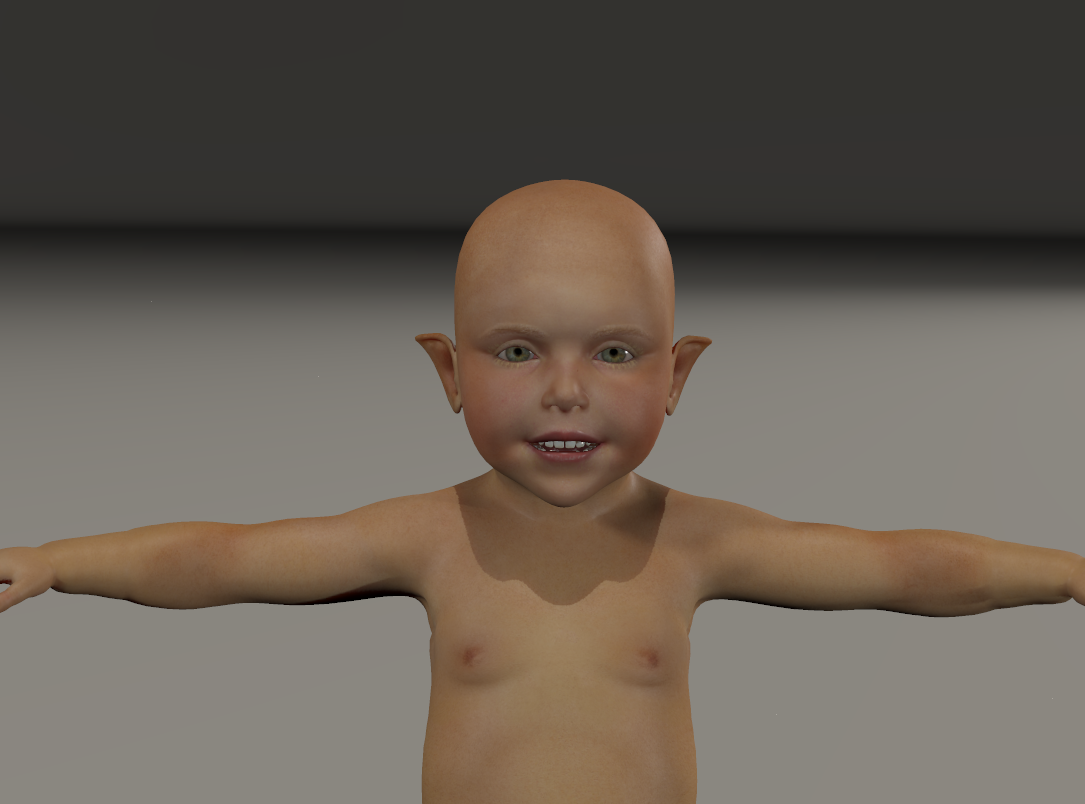 Contributing Artist
And one with Trumacar's Christening gown... 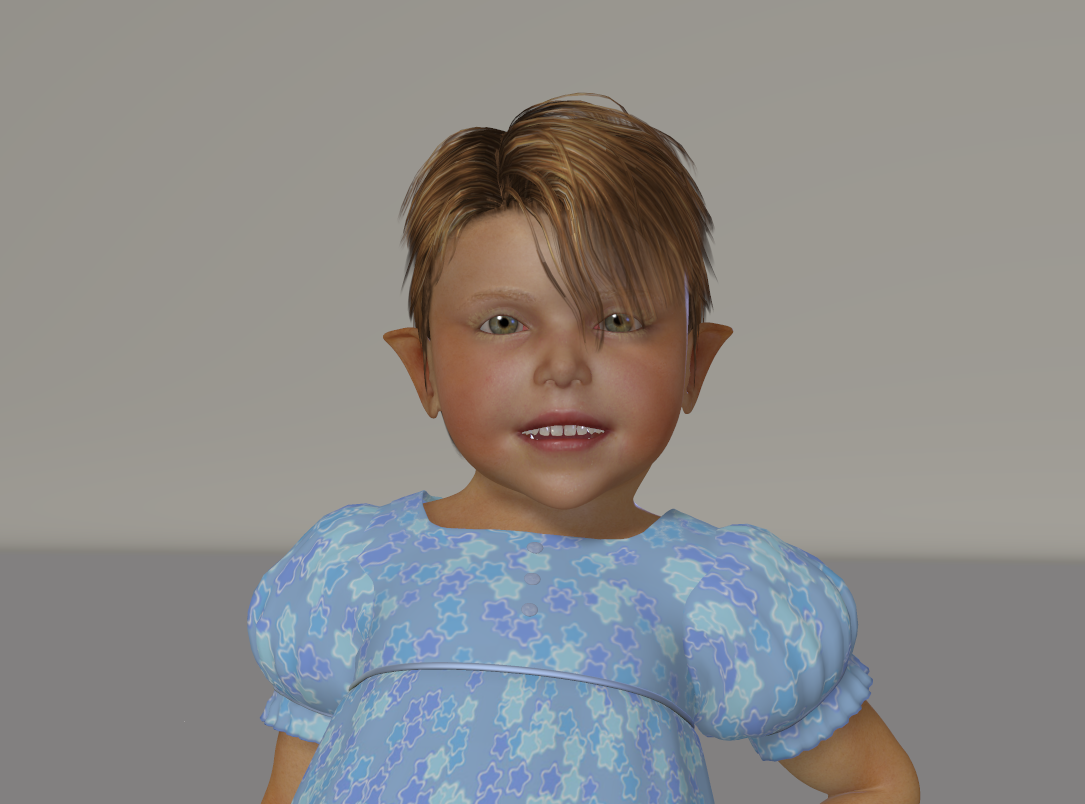 Contributing Artist
And one that I just couldn't resist doing...dialed in creature teeth 2 from the creature pack Chris did. 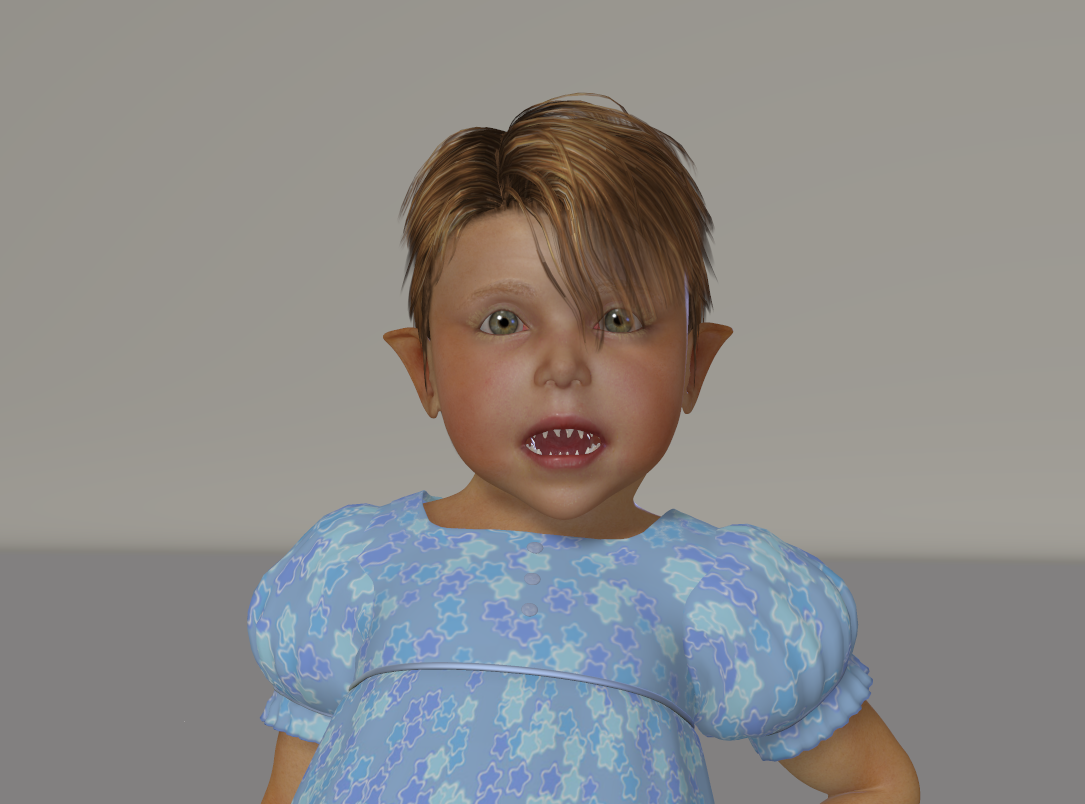 Pen, they all look really adorable! Thanks for sharing.

Contributing Artist
thanks Rick...still need to do a texture for her but I'm hoping to get that done in the next couple of weeks.

She is sooooo cute

Contributing Artist
Thanks Lorraine and Mythocentric...I'm getting there. I still need to do some textures for her. I think with a name like Deidre she should be pale skinned and freckled. Then I'll need to find some people willing to test in both programs.

Contributing Artist
So I now have injections and REM's that will load in Poser 2014 and Poser 11. One question does it matter if the INJ is at the start or the end of the name of the pose file?

I've started on the texture for Deidre and with a name like that she has to be a pale skinned celt of course.

Looking for feedback on whether anyone would like to see a version with heavier freckles as I'm thinking that for a young child these days they would be using skin block when out and also due to the age not as many freckles...but would like to know what everyone thinks.

I plan to do some textures for Sprites and fairies also as I think this would be something it could be used for especially with the teeth.
No Freckles 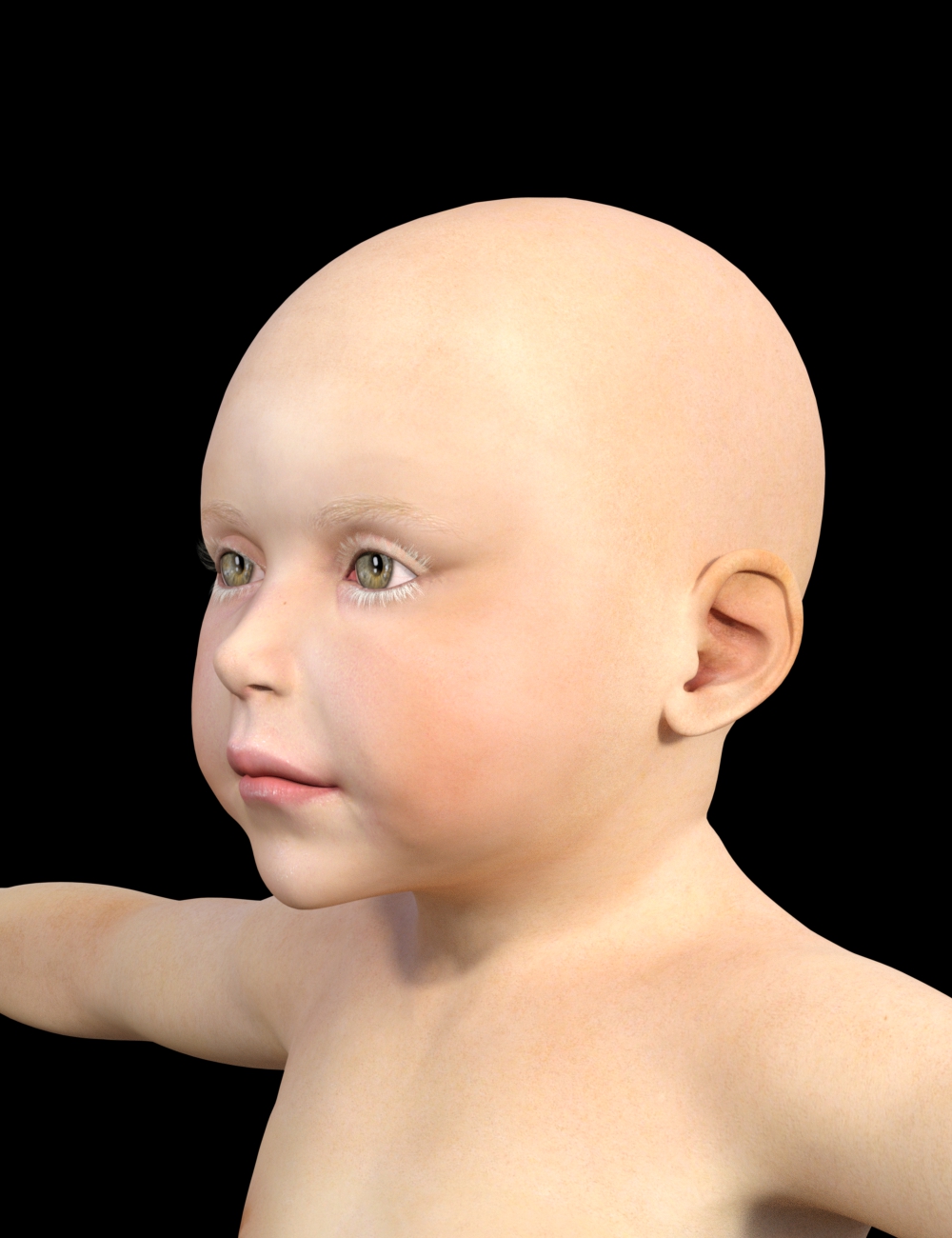 With light smattering of freckles across the nose... 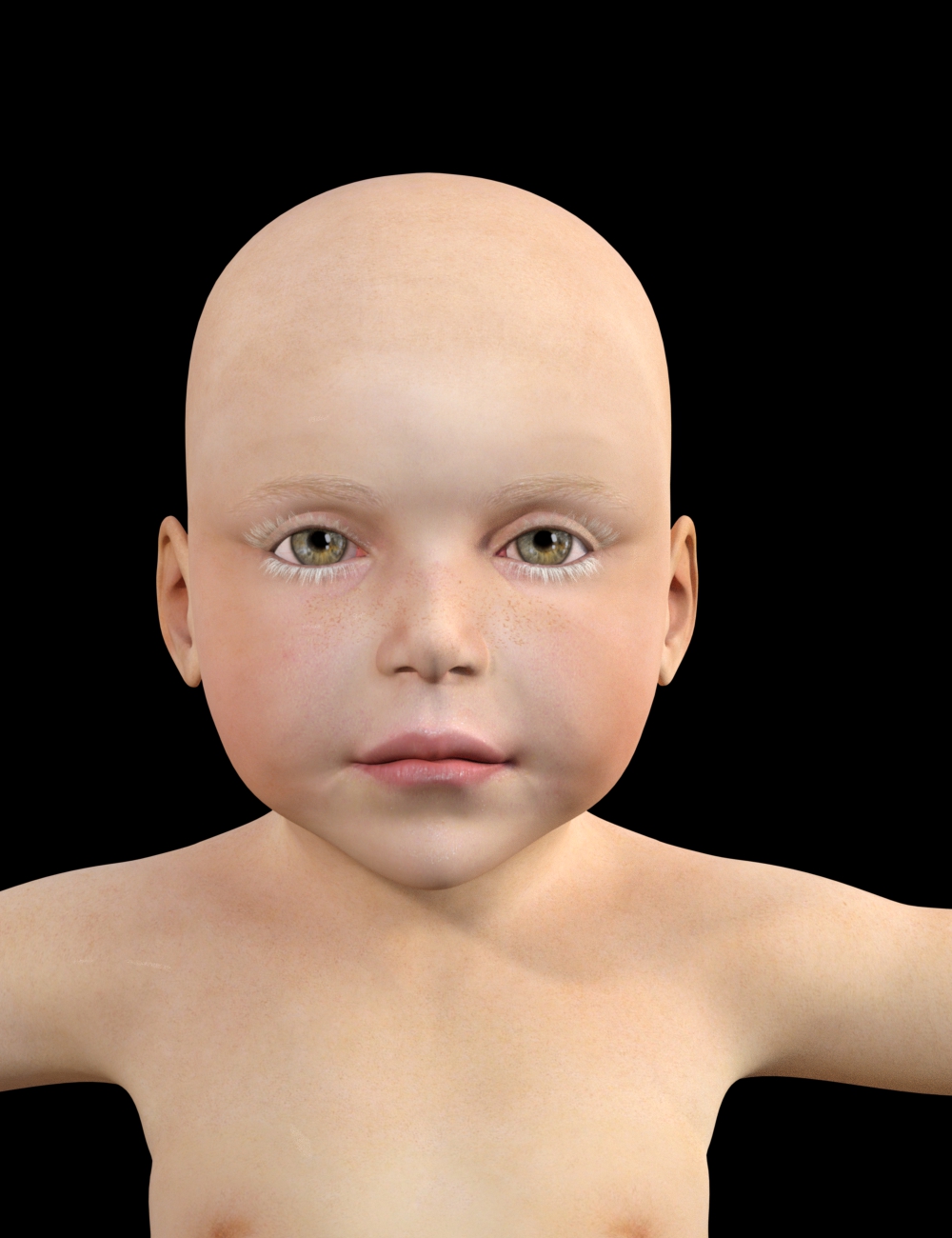 Pendraia said:
So I now have injections and REM's that will load in Poser 2014 and Poser 11. One question does it matter if the INJ is at the start or the end of the name of the pose file?
Click to expand...

I think a version with more freckles would be very welcome Pendraia. After all, children are timeless and I'm sure Deidre will turn up in renders depicting all ages and not just modern times. I'm thinking of our Sara's best friend Janine, (she of the glorious curly red hair!), a thoroughly-modern young lady who would not be the same without her freckles.

Contributing Artist
Okay...that's cool. I'm not very knowledgeable about Poser but I'm trying to learn as I go along. So put them at the end.

I'll give it a go then...Mythocentric

Contributing Artist
Okay...here's a render of her with more freckles and some green eyes I did. Still need to work on the eyebrows. 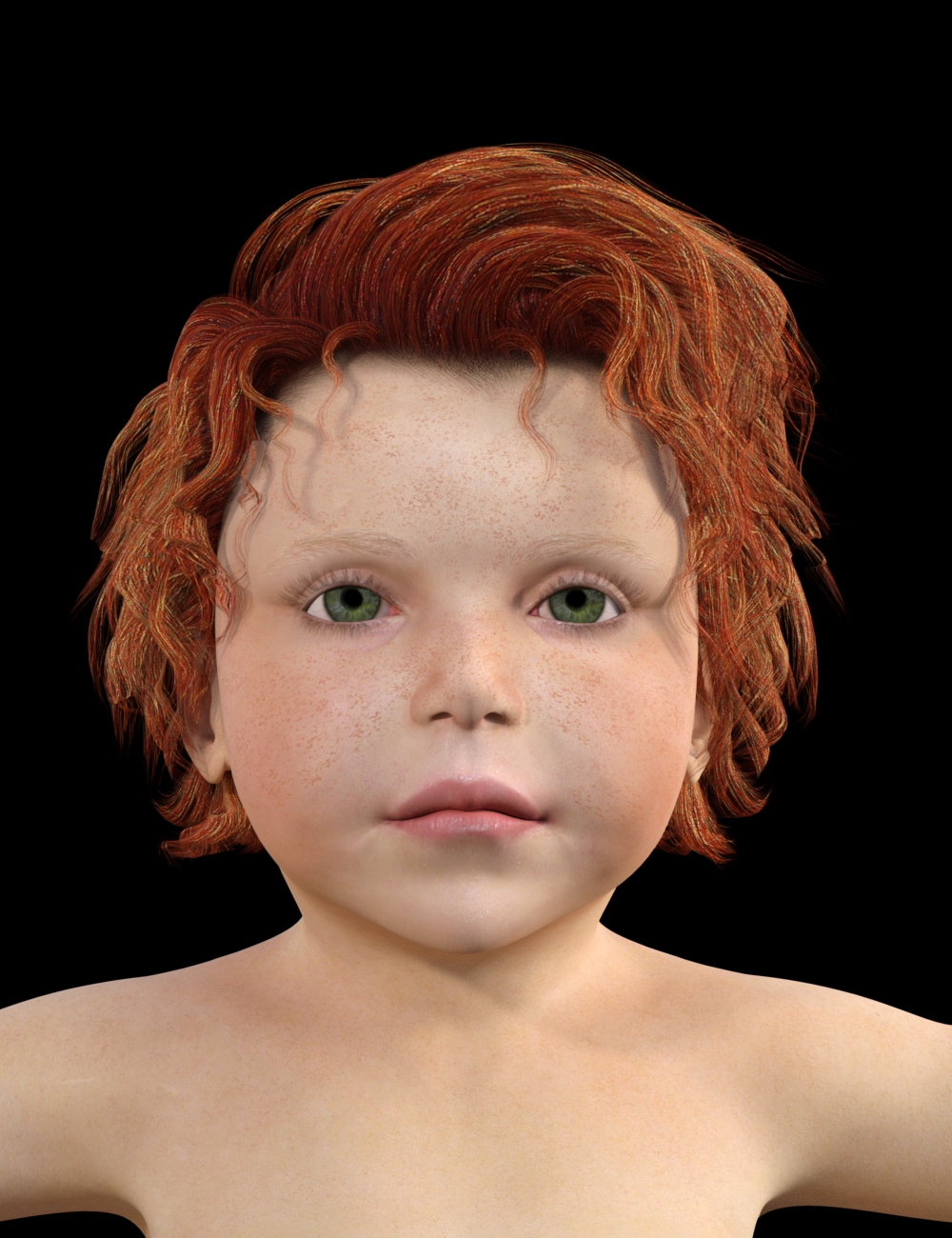