Hello! I purchased the Smoke and Flames Tool the other day (it's amazing by the way) and I was wondering is there anyway to create an animated explosion with it, or perhaps there's a way I could use an explosion sequence of PNGs with it? It doesn't necessarily have to be with the Smoke and Flames tool, any way to create an animated explosion inside of Poser will work. Any assistance is greatly appreciated.

Nice to see you found your way here. As I said in email, we have a friendly community here and I'm sure someone will chime in with ideas or assistance.

CV-BEE
Welcome to the HiveWire forums from me as well Darkskills.

Contributing Artist
Welcome to the forum!

I just searched Google for about 9 pages and didn't see a thing. Maybe someone else will know.

Thank you all for the warm welcome!

Don't know the answer, but I'll see if I can grab Chuck (Nerd3D) and bring him over to help.

Welcome to the hive Darkskills, I hope you stay around and have fun. I have created an animated explosion in Poser but the was some years ago and I was using a product developed for the precise purpose but the bad news is it disappeared some years ago. There must be a way, I will do some research but I am sure someone far more knowledgeable than me will come up whit an answer long before I do.

Contributing Artist
You may have better luck with the Smoke and Flames tool It has a fire emitter. It doesn't come with a fireball image sequence but you should be able to find a 100 frame explosion sequence on the net someplace. Just substitute that for one of the included sequences. The Smoke part of smoke and flames can do a mushroom cloud pretty easily.

Contributing Artist
I could probably come up with some answers and tips, but would need some time. I would actually use tools like Smoke and Flame in combination with Dust and Trails and other VFX props to make an explosion, depending on how complex an explosion I was making. A good explosion should have some layers of smoke, fire, and debris. Sadly, without good volumetrics and particles, Poser is at a disadvantage for realistic animated explosions. That's not to say it can't be done.
I have used Nerd3d's tools a lot, so let me dust of some of my VFX test notes and run a couple more experiments and get back to you.

Contributing Artist
also, be back in a day or two with a couple 100 frame fireballs.

Thanks everyone for the quick replies! I'll try swapping out the fire sequence with an explosion sequence and see how that does.

Contributing Artist
I have found this thread a bit late, but here's how you animate an explosion in Poser, complete with transparency and even light emission.

1. Create your explosion sequence, and save it as an AVI video with a white background.
2. In Poser, load a plane primitive from the library.
3. With the plane selected, switch the Materials Room, and attach a Texture2D -> Movie node to the diffuse color.
4. Load your AVI into the texture

1. Invert the Movie node output by plugging a Math_Function node to it, set both values to "1" and mode to "subtract".
2. Plug the Movie node into the 2nd input, and the output to the Root node Transparency channel.
3. Set the transparency value to "1".

To make the explosion emit light:

1. Plug the Movie node to the Ambient Color channel.
2. Set the Ambient Value to something between 1 and 3. 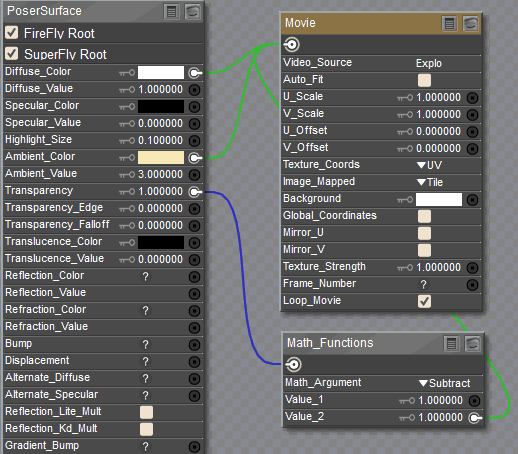 Below, I have rendered a 20 frames demo with all of the above. It plays with proper transparency over any background. The explosion plane is behind the DawnSE character, and has been scaled up to make a big explosion.

Contributing Artist
Here's another test using the same layout, but this time the explosion was created over a BLACK background, and the Movie node was plugged directly to the Transparency channel without a Math_Function node. Now all the black parts of the explosion become transparent, and it still emits light only on the visible parts during the animation. It's the simplest possible layout, now using just one single node! ^____^ 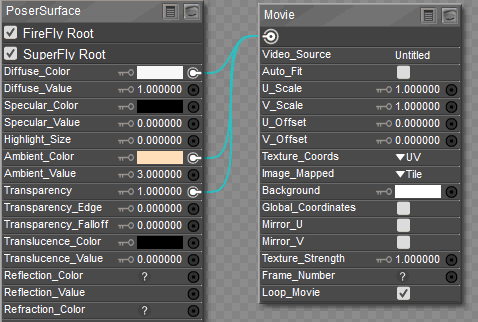 I have placed the plane between 2 figures to show the transparency, and note how it projects a shadow on the ground with the exact explosion shape. Rendered with Firefly, but will also work with Superfly.

Contributing Artist
Out of curiosity, this also works in preview mode (OpenGL), so it can be rendered in real-time. The preview quality is not great, but hey, it renders in real-time! ^____^

Ken1171 said:
I have placed the plane between 2 figures to show the transparency, and note how it projects a shadow on the ground with the exact explosion shape. Rendered with Firefly, but will also work with Superfly.
Click to expand...

That looks pretty cool Ken. I assume you can make it any size you want, since the explosion behind Dawn is much larger.

Contributing Artist
Not only the size, but you can also adjust the explosion shape by stretching the plane. I actually had to do that in this case, because the explosion frames were rectangular, and the default plane was square.

Contributing Artist
Is that Max for Poser? Oooh, whered'ya get him?
D

Miss B said:
That looks pretty cool Ken. I assume you can make it any size you want, since the explosion behind Dawn is much larger.
Click to expand...

Sweet! Thank you my friend! That's exactly what I needed! Much appreciated!

KageRyu said:
Is that Max for Poser? Oooh, whered'ya get him?
Click to expand...

Yes, it's Max (the "little buddy") for Poser. I've modeled him as a rigging exercise a long time ago, and ended up getting featured at DeviantArt for it. You might have noticed Max shows randomly in my renders every now and then.


Darkskills said:
Sweet! Thank you my friend! That's exactly what I needed! Much appreciated!
Click to expand...