Songbird Remix Bird of the Month!

Each month we will feature a new bird or series of birds and will share a bit about them.

This month's featured selection is Waterfowl Volume 2: Diving & Sea Ducks which are on sale at 40% off or save up to 49% by using your Reward Points. 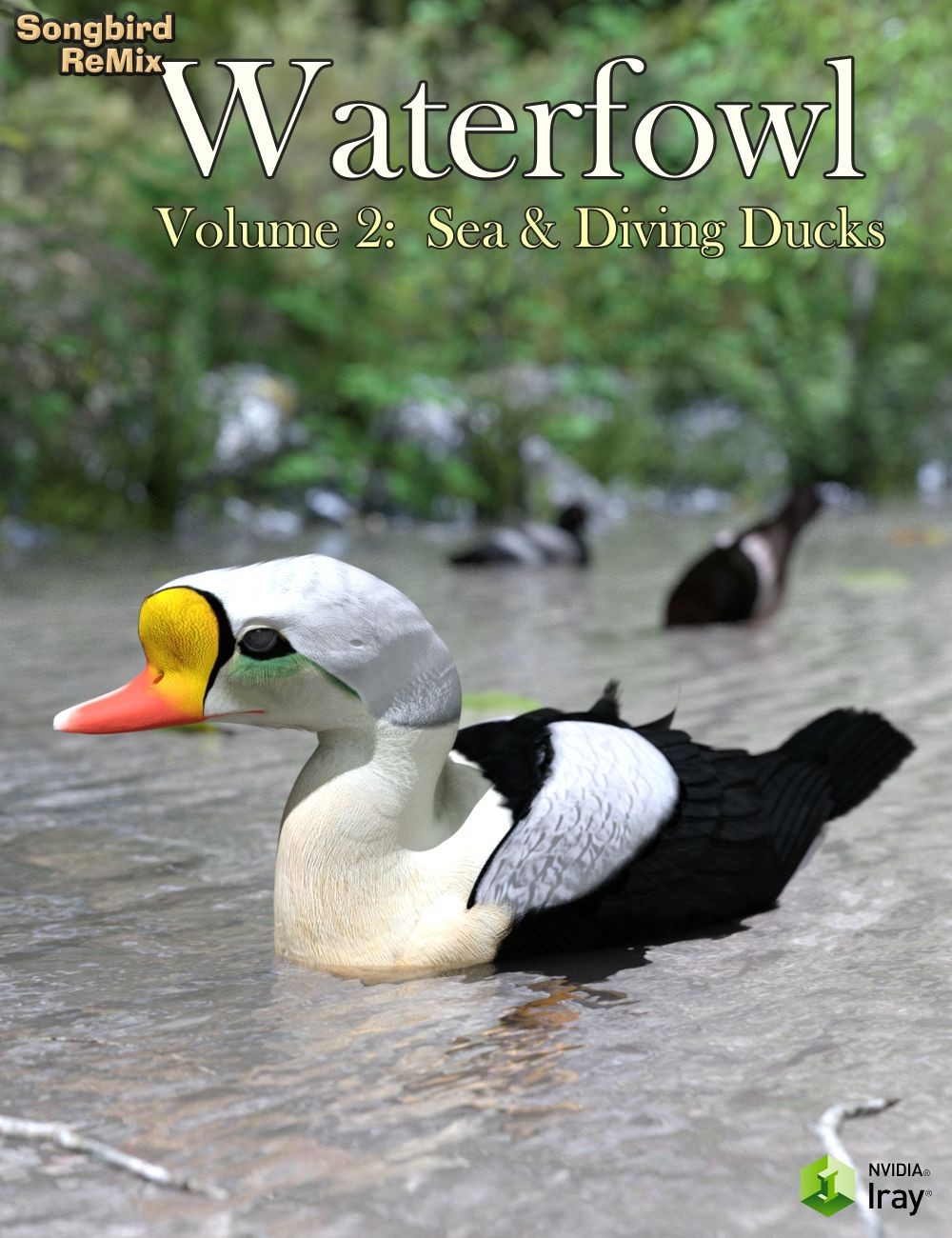 ​
Here is some recent information from Audubon California that includes several of the species from Diving & Sea Ducks.

Waterbird Feeding Frenzy
Pacific herring are spawning at Point Richmond on the east side of San Francisco Bay, attracting thousands of waterbirds in a feeding frenzy.

During herring spawns, which take place only in the winter and early spring, this food source is one of the most accessible and energy-rich foods available to birds. Fish-eating birds like grebes, loons, and pelicans eat the protein-and-oil-rich spawning fish, and ducks and gulls eat the oil-rich roe.

This is a key reason San Francisco Bay is an Important Bird Area and key migratory stop on the Pacific Flyway.

HW3D Exclusive Artist
I find it pretty amazing that there's such a variety of birds featured in that video clip. Here are the birds (which are in SBRM format) that are shown in the above clip:
I've embarked on a small Nature's Wonders project that should compliment the bird(s) of the month... for now, entitled my "Stinky fish collection" (Herring, Sardines & Anchovies)
Last edited: Feb 23, 2019

What a cool idea, nice to see Hivewire embrace this type of thing. Doffs cap!

awesome... can't wait for the emu to be bird of the month

Staff member
Co-Founder
Our next Bird of the Month are Songbird Remix Frogmouths, Nightjars & Goatsuckers which contains 15 different bird species.

Songbird ReMix Frogmouths, Nightjars & Goatsuckers contains species found in the Caprimulgidae, Chordeilinae, Eurostopodidae, Podargus, Batrachostomus and Rigidipenna families. These are all nocturnal birds distantly related to Owls. These birds are known for their exceptionally large mouths and expertise in camouflage.


Here are some fun videos about these birds.​
Nightjars

Save 49%* on Frogmouths, Nightjars & Goatsuckers this month only.
Share YOUR renders in Ken Gilliland's Products in Renders thread.
*when using Reward Points​

I have a place near me, "Throne York Moors" were we have nightjars and sundews. I will never forget that trip.

HW3D Exclusive Artist
I've shared this before, but we get a pair of common poorwills (a type of nightjar) in our yard all summer.

The common poor-will is the only bird known to go into torpor for extended periods (weeks to months). This happens on the southern edge of its range in the United States, where it spends much of the winter inactive, concealed in piles of rocks. This behavior has been reported in California and New Mexico. Such an extended period of torpor is close to a state of hibernation, not known among other birds. Song of male is a melodious, whistled “poor-will-low” lasting about 5 seconds.

We have a dirt access road that goes along the side of our garden and the poorwills like to camp-out at dusk on the road and hawk sphinx moths. Sphinx moths are hummingbird-sized moths that love our sages and Datura; the two types we get are the White-lined Sphinx Moth and the One-eyed Sphinx Moth (both of which are in my Moths of the World v1 and base set). For those who haven't guessed, the reason for creating the moths sets was to feed my nightjars.

Here's an iray render of my common poorwill sitting in my driveway... 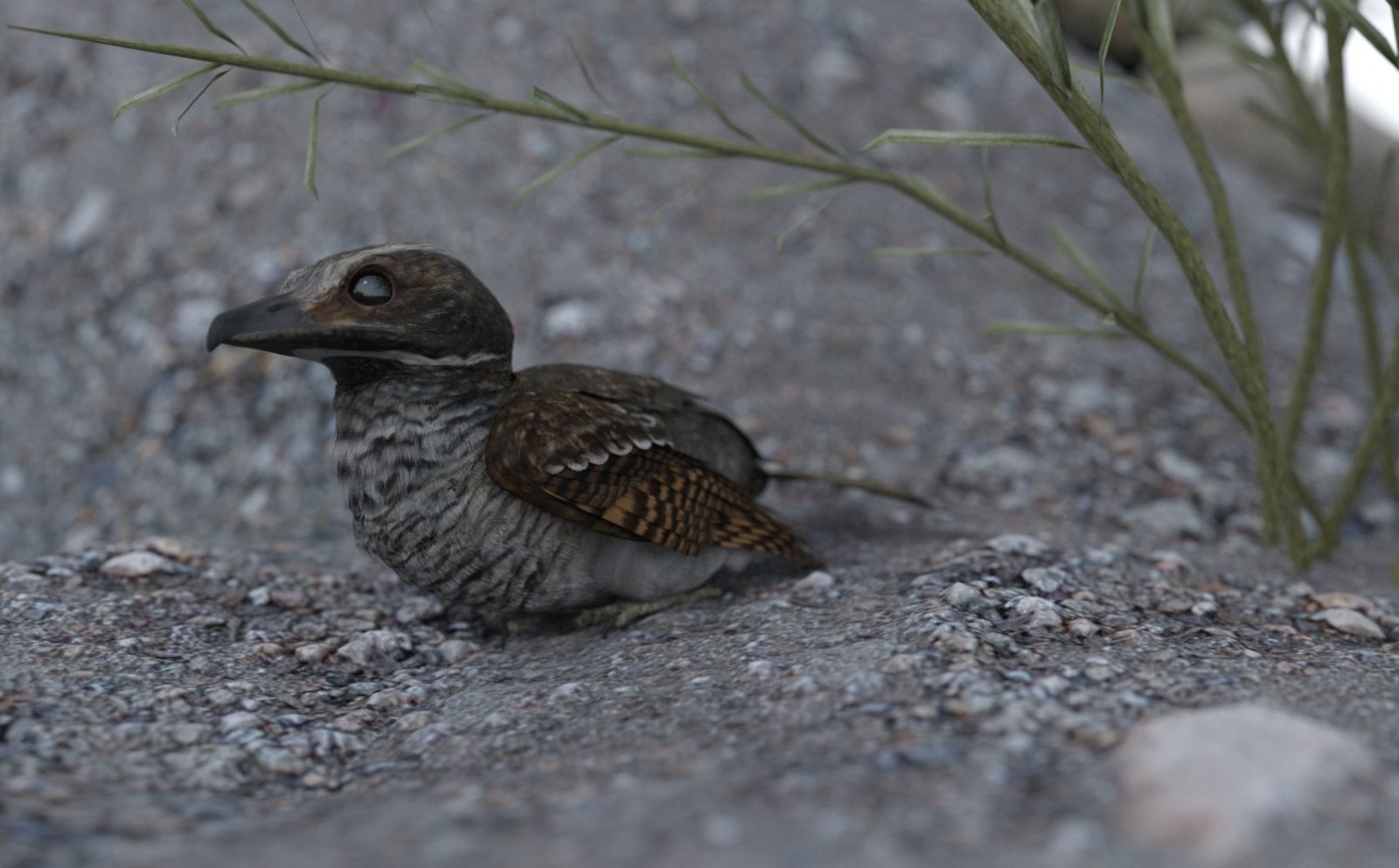 I know the pose in this image may seem a little unnatural for a bird but here's a video of a real encounter.


While I love my poorwill, I think my favorites in this bird set are the frogmouths and the endangered Puerto Rican Nightjar-- I've been afraid to check its' status after Hurricane Maria flatten Puerto Rico. It's endangerment comes not from hurricanes but from feral cat attacks... hey, there's a render idea that can teach as well Since I'm giving away render ideas,... I've always pictured an image of the male/female common frogmouth scaled up to about 50-66% of human size on either side of a throned king/queen.

Staff member
Co-Founder
This time we have SBRM Characters as the Bird of the Month. 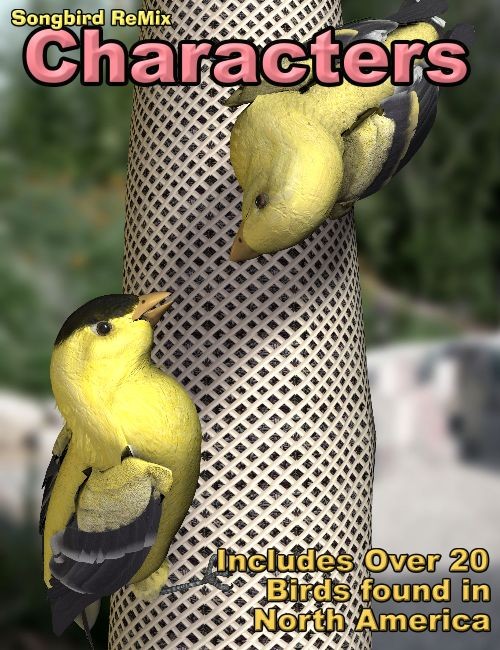 Here's a clip from Audubon California that talks about the current breeding season.

Is the Bird of the month supposed to be 40% off? Because it is full price for me.

CV-BEE
Not sure, since Lisa didn't announce it yet, but I suspect there's a new Bird of the Month she'll be announcing in today's newsletter, so that may be why you're not seeing the sale price.

Of course, I could be wrong, but Lisa will have to answer that.

Thank you Miss B.
In fact I looked at it last week and I didn't have the sale price.
Forgot about it and when I read the newsletter I remembered!

CV-BEE
Yes, I just saw today's newsletter, and it says it's on sale until midnight tonight (I'm assuming their server time), so Lisa should take notice of your query.

QAV-BEE
Contributing Artist
It's in today's newsletter Miss B, but it's not on sale.

CV-BEE
I saw it in today's newsletter, but I thought it said it's on sale until midnight tonight. Maybe that was for something else in the newsletter.

Here is what the Newsletter says : 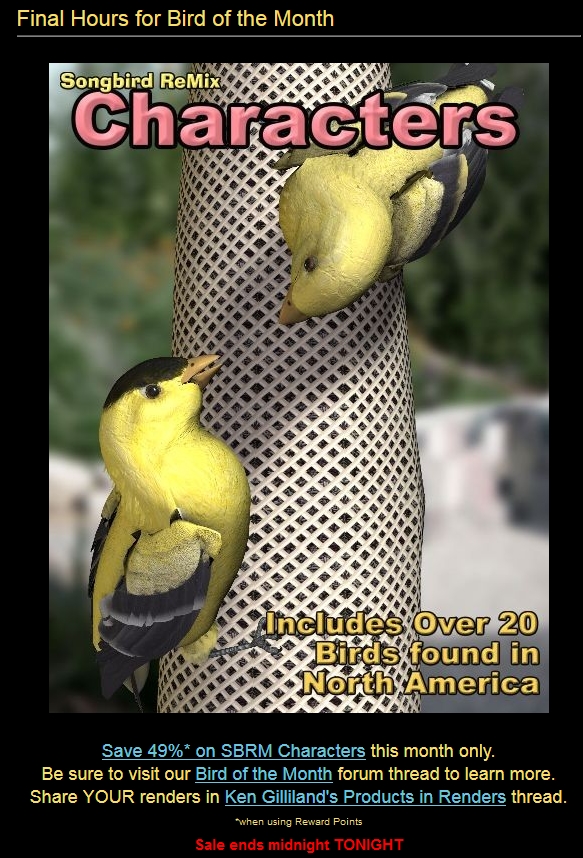 CV-BEE
That's what I thought I saw in the newsletter.

Contributing Artist
I've been checking it all month, it has never been on sale for me.

HW3D Exclusive Artist
I'm checking with Lisa on this

Staff member
Co-Founder
You folks are correct. The sale end date was set to 5/7/19 instead of today. I wish someone had said something sooner!