SO, while I've already got a pile of projects to finish Pan hit me in the head and said "HEY work on me again" so I pulled that idea back off of the shelf. I've toyed around with various ways to get his lower legs morphed or add on a set of legs. I decided on the legs.

I've run into issues though. The legs are now rigged but I can't conform them and not sure why that is. They conform alright but they turn into spaghetti so then thought about just parenting them and turning off all the lower Dusk limbs to create the effect. That works but while the rigging LOOKS good obviously the weight maps need going over.

So I'm reaching out for help. First on the conforming issue. Perhaps if Paul has a second or someone that knows about rigging in DAZ Studio to give me some pointers on what I need to look over. I know the weight mapping is point ONE but why can't I conform these? The bones are all named the same as it's Dusk's rig but in the Joint Editor I just moved them using the tools there to re-position them.

When I rotate the thighs, those at least work as expected but the shin, foot and toes bones are not looking very good, again the spaghetti effect and again probably the weight mapping.... Just wish there were more of an automated way of doing this. Technical stuff always makes my head hurt.

Below are the legs parented to Dusk - Pan with just the thighs in motion. I'll need to create a transmap to transition between the body and the legs, I know... 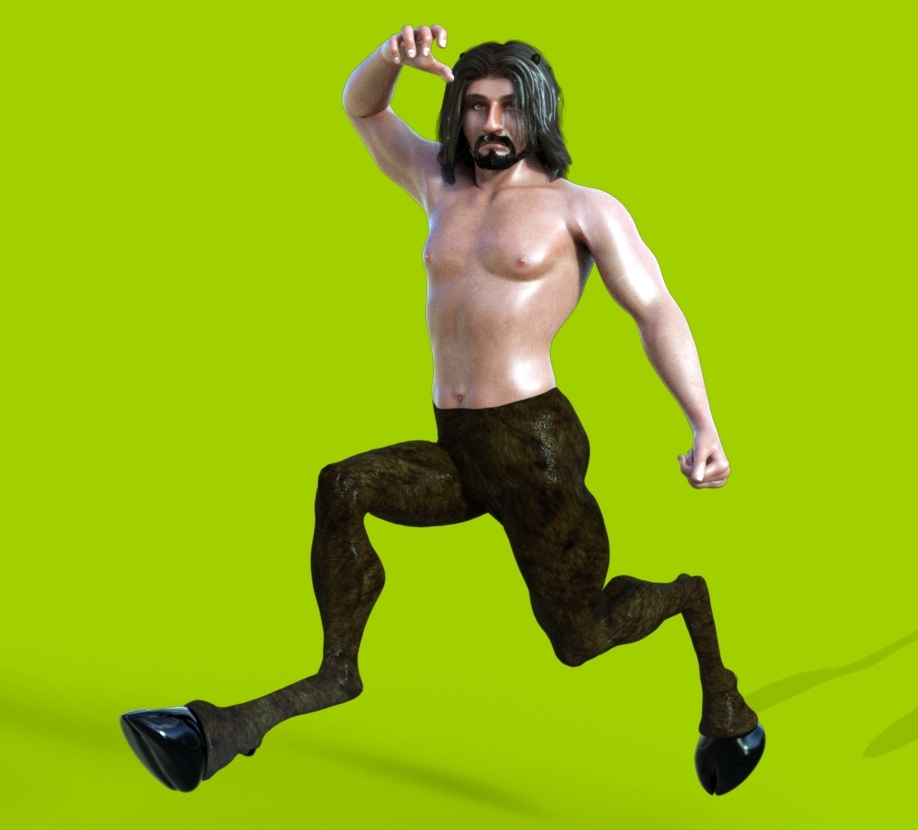 Never tried anything so adventurous.
I would consider geografting the heel-to-hooves parts to Dusks feet, morph and re-texture Dusks legs

Contributing Artist
Heh, I know nothing of geographing but it's an idea! Thank you!

I cant remember much (in general

), but I did try it once. I will have to look into it again

Contributing Artist
I love the idea but my mind just doesn't retain info like it used to... that old adage... "old dogs, new tricks" lmao

The tutorial on daz forum still works whether for this or something else, i dont get the material/UV flow yet though.
[Tutorial] Starting out with Geo-Grafting (repost)
A quick test with my awesome shoehorn 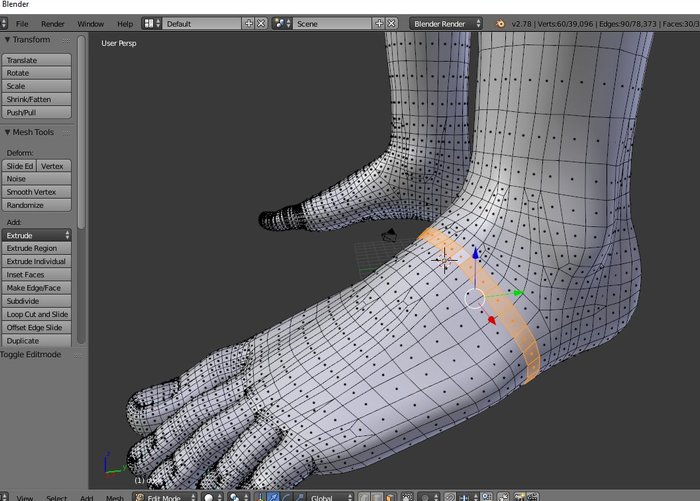 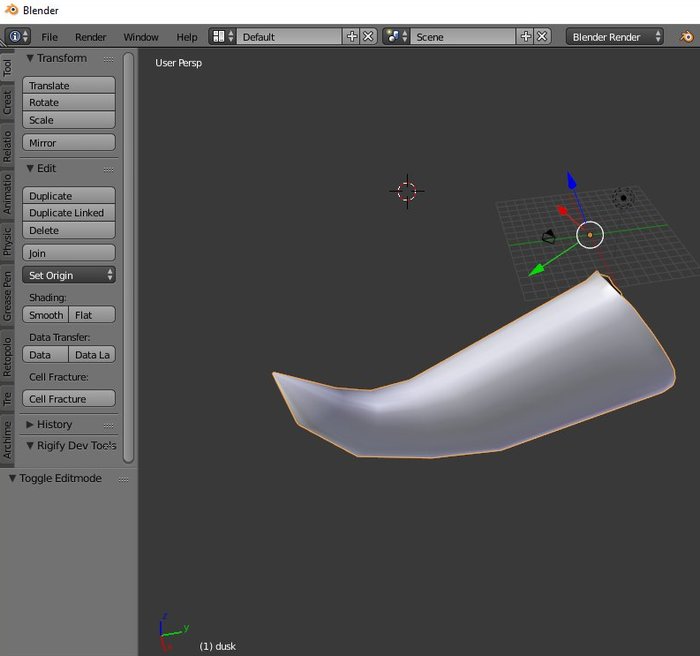 Well dont get distracted, Pan is a cool idea for Dusk however you do it

Contributing Artist
Can you do a screenshot of the bones on the legs? I'm wondering if you have realigned them to legs. That's normally what causes the problem with spaghetti legs in my own experiences. You will also need to use ERC freeze iirc. I have a tutorial somewhere if that is the problem.

Contributing Artist
ERC Freeze? I was under the assumption that this tool was used for a morphed figure. This is a conforming item hon!

Here is a screen shot of the legs. Showing the bones and their placement.

I am noticing that the old rig from Dusk is still showing the original "bounding box" of the original size of the limbs. Like I reutilized the Foot bones as Shin2 and the Toes bones as the Hoof but as you can see from the second screen shot with the Hoof selected the bounding box is still surrounding the old toes placement and I'm not sure how to fix that! 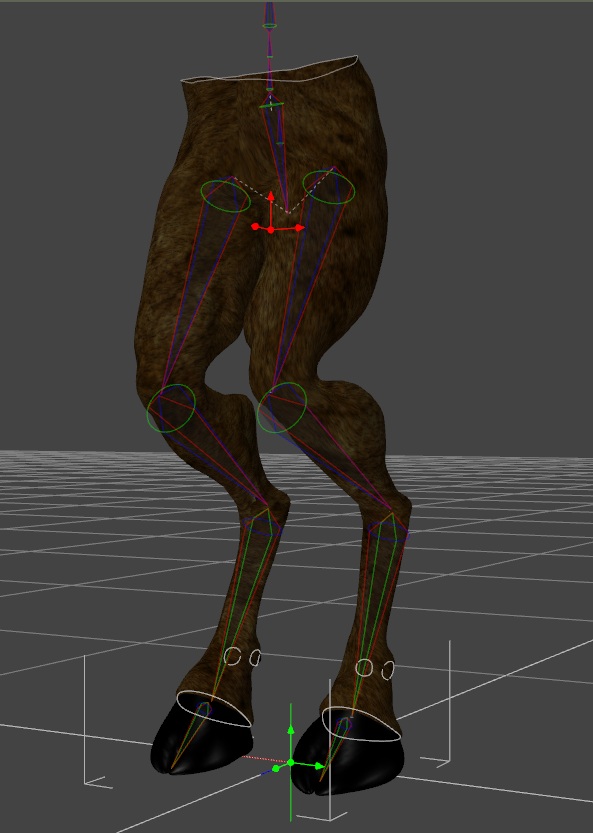 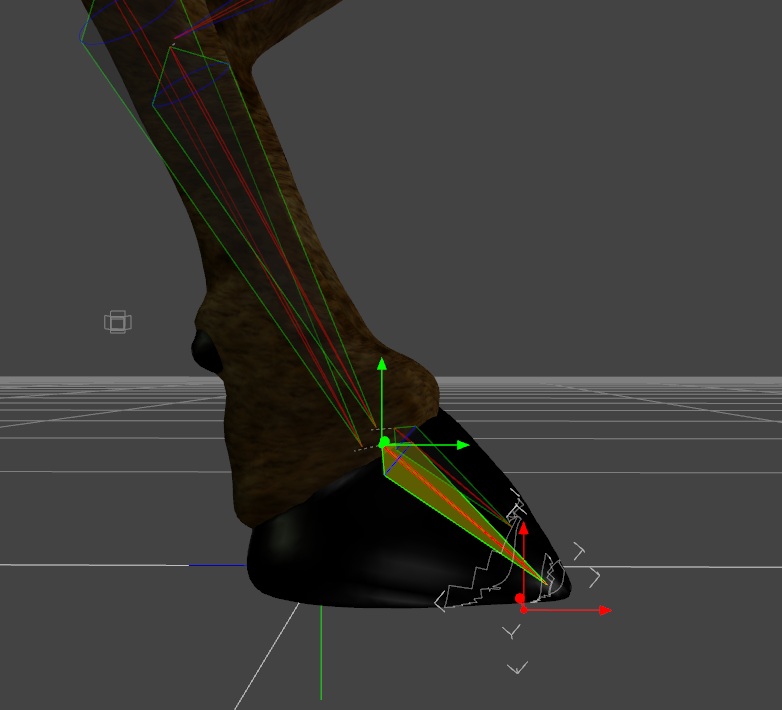 Contributing Artist
Sorry Ram...I was thinking as it was a very different shape that it might have a similar issue but doesn't seem to from your screenshots, although what you describing might need something similar to that done. I thought it applied to rigging where the figure had been changed drastically and in a way even though this is a conforming item you're still using from the sounds of it the original set up. Or did you rig from scratch?

Contributing Artist
Sooooooooooooooooooo Pretty happy with my work today. Got my Pan legs rigged and weight mapped. I kept hating the direction they were going and the way they fitting to Dusk, so I actually took the legs back into ZBrush and redid them pretty much all the way, re UV'd them and set them up from scratch making my own rig rather than using a donor rig. I went with the General rather than the TriAx mapping, easier on my nerves.

The legs need a little more work around the knees and the buttocks (you can see the buttock issue from the image) but other than that they work pretty well.

I guess I'll have to settle for parenting them to Dusk rather than conforming but then again I guess these can be made more universal for allot of other figures and if Poser uses the General weight mapping they can be exported as a CR2 for the Poser users to make use of.... 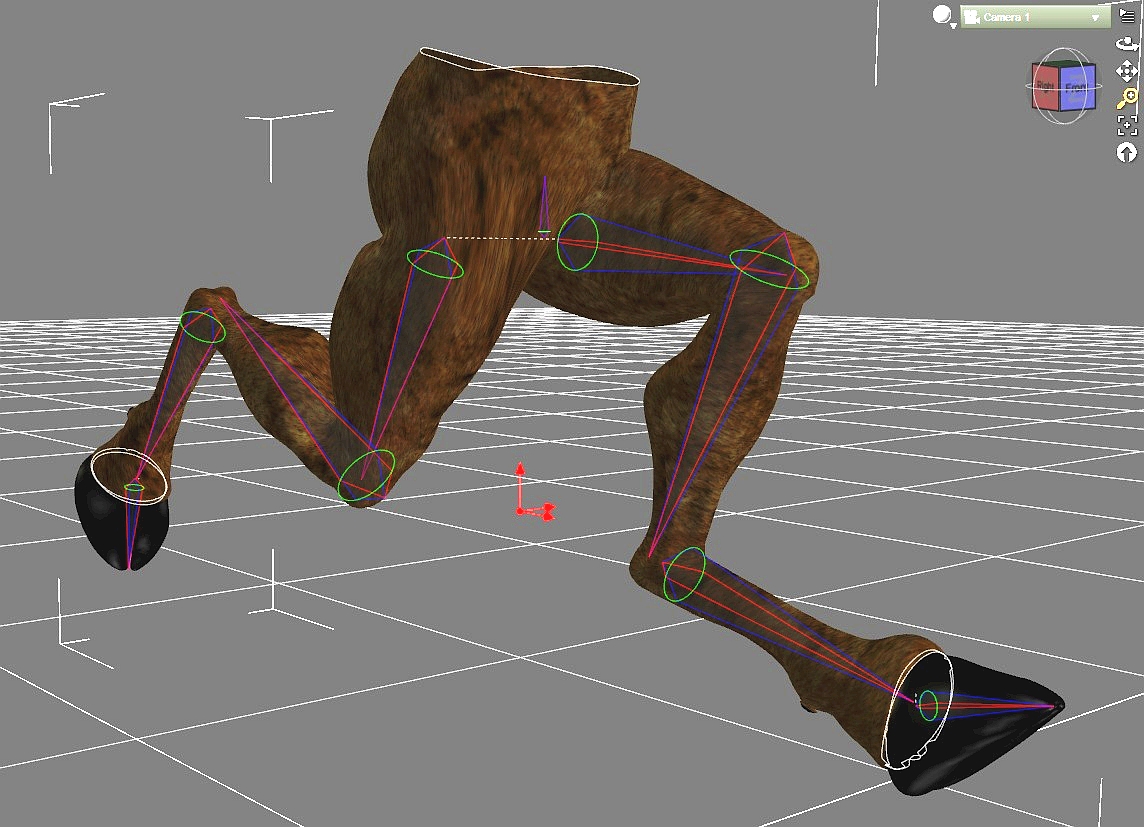 Staff member
HW3D Exclusive Artist
Looking good, Sorry I didn't see this sooner. Any bones you want to follow Dusk will have to be in the same position, in order to avoid the spaghetti bending. Since your legs are in a different pose than Dusk's, you could just use the hip and pelvis as conforming bones. Then you can rename the thighs, shins, feet, etc, so they are not the same name as Dusk's. This way your legs can keep what you have already done and they will work when conformed.

Easiest way is to rename bones from thighs down with some type of suffix so they are different. Then load Dusk and use the transfer utility. Uncheck everything but the weight maps in the options. then check merge hierarchies under that category. Check fit to, at the bottom and accept. DS will put Dusk's hip and pelvis weights in, but keep all the other weights you set for the legs and feet.

Yes, spent all day yesterday learning about rigging and weight mapping a bit more. At this part of the game I think I'll stick with what I have and just parent to the figure. I'm not even sure how I would size the hip bone, I don't have a pelvis bone in there. As for Dusk, he will get the Pan morph and all the goodies like the tail and horns. If I decide to make this a Universal sort of figure I'll have to do a fit for Dawn and then drag out the basic Genesis figures and fit them to at least the base. Not sure about the Poser figures yet. Not sure if the General weight mapping is supported in Poser. I don't want this project getting too huge....

Contributing Artist
Thanks for the info Paul...

Staff member
HW3D Exclusive Artist
No problem.
BTW, when you merge hierarchies, the hip would be re-positioned with the weights for Dusk, because the bone is named the same.

Contributing Artist
Can you give me a little more info on that Paul? Not sure what you mean by merge hierarchies. Also, IF I were to attempt to make these conforming for Dusk and Dawn your saying that if I have just one or two bones that were the same between both figures it would work, so then the bones down the legs and hoofs would not try to conform? Thanks sir!

CG Cubed said:
Looking good, Sorry I didn't see this sooner. Any bones you want to follow Dusk will have to be in the same position, in order to avoid the spaghetti bending. Since your legs are in a different pose than Dusk's, you could just use the hip and pelvis as conforming bones. Then you can rename the thighs, shins, feet, etc, so they are not the same name as Dusk's. This way your legs can keep what you have already done and they will work when conformed.

Easiest way is to rename bones from thighs down with some type of suffix so they are different. Then load Dusk and use the transfer utility. Uncheck everything but the weight maps in the options. then check merge hierarchies under that category. Check fit to, at the bottom and accept. DS will put Dusk's hip and pelvis weights in, but keep all the other weights you set for the legs and feet.
Click to expand...

So say I got a morph for Dusk's lower body half as a sort of set up morph? I named it "DuskLegsMorph" (I think I'm going to create a new category in my growing list called "Pan" and put the Pan upper body morph in there along with a head morph and the DuskLegsMorph" to keep it all in one place. So if I copy the rig while it's dialed up using the Transfer Utility and choose that morph in the drop down for the Source > Morph > DuskLegsMorph will that insure the bones get transferred correctly? Then all I would have to do is remove the foot and toes bones, put in a Shin2 and Hoof bones L & R and it SHOULD conform without the spaghetti issue? What are your thoughts on this Paul. 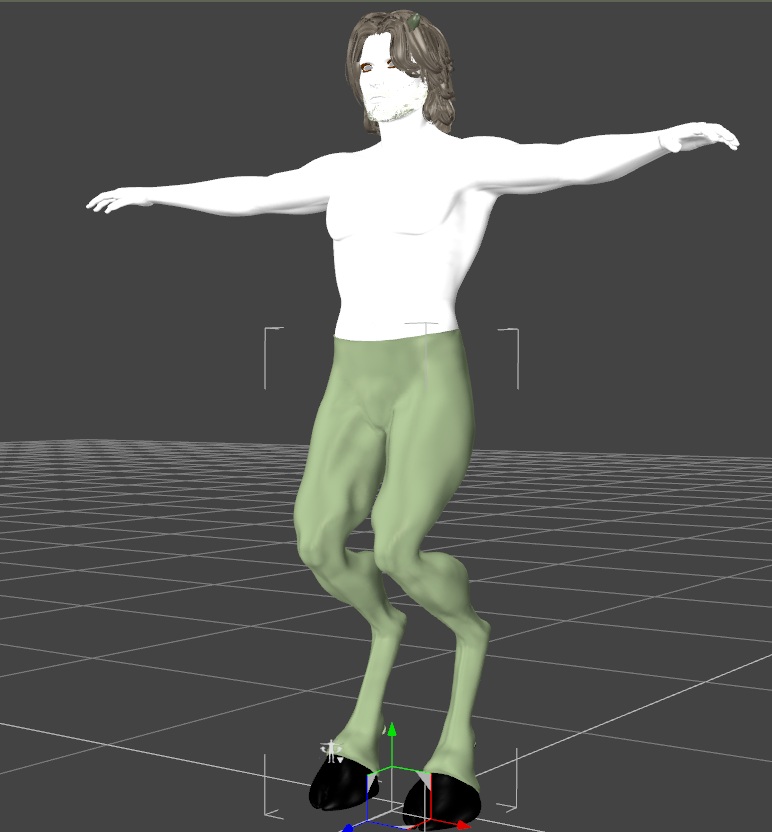 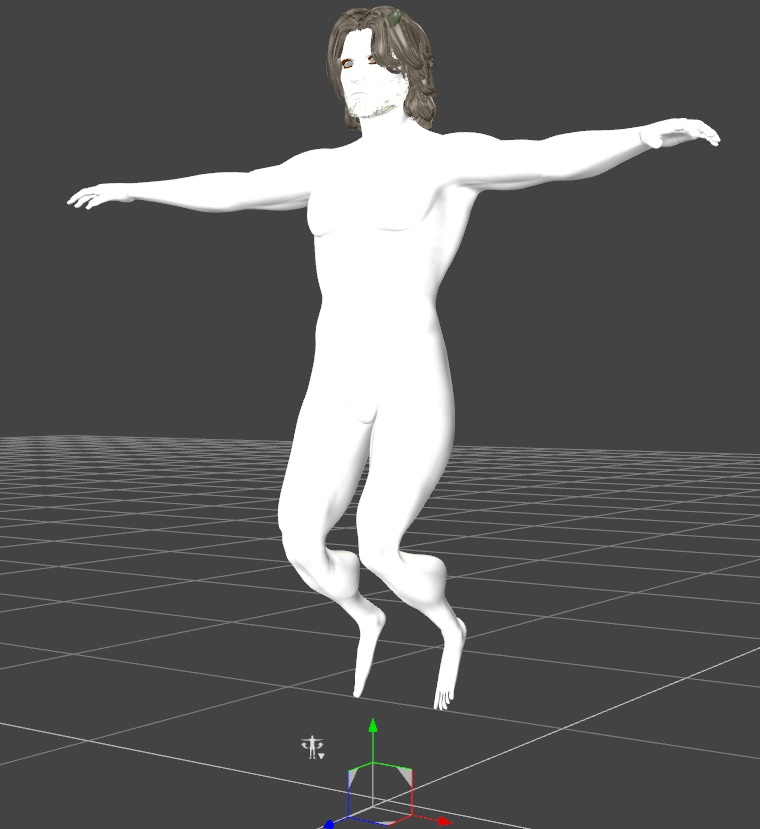 Contributing Artist
Wow...you are doing great Things !!!
Love that
Sorry that i can´t explain so good.
The green one looks very good .
Just go Paul´s way now ! I do that way with all my adult stuff too.
That will Need a bit weightmap adjustment, but i think that it will not take so much time.
And that will be fun
Will you add some cloth stuff too ?
You must log in or register to reply here.
Share:
Facebook Twitter Reddit Pinterest Tumblr WhatsApp Email Link
Top