How to get eyebrows or beards to follow once fitted to figure?

Contributing Artist
Doing some practice in ZBrush and Poser. Took going into DAZ Studio to get the proper fit to Dusk (eventually L'Homme) and then back to Poser to import the eyebrows I made. So I got them parented to Dusk's head, which works fine but I was HOPING that by injecting all the needed head morphs into the brows that they would follow along. That's a no go sadly.

PS: The brows are by NO MEANS my finest work, it was one of my early experiments using Fiber Mesh, very early, like around when Dusk 1 was released. Might be a good "toon" brow if I reshaped them a bit but not realistic enough for my tastes. See the screen shot..

Over at the 'Rosity forums here is the written tutorial they gave me to go by:

This method can be used for fitting anything to anyone. There are fitting tools in the fitting room, but I find it easier to pose and size the clothing close to the figure in the pose room and finalize it with the morph tool. The auto group isn't the best, but good enough for personal work, and sometimes it might work for professional quality if you're lucky.
Click to expand...

I've tried my luck using the fitting room and the instructions above and while it resulted with a fitted eyebrow they don't follow along with Dusk's various face and brow morphs AT ALL!! The brow morphs for Dusk are completely ignored while some of the face shapes work OK but ultimately for most head shapes the brows look unacceptable. Learning this is for a for sale pack I'm working on (not these brows as explained above as they are only for testing and learning)
Any suggestions as to what to try to get them working as expected?

Thanks so much, Richard 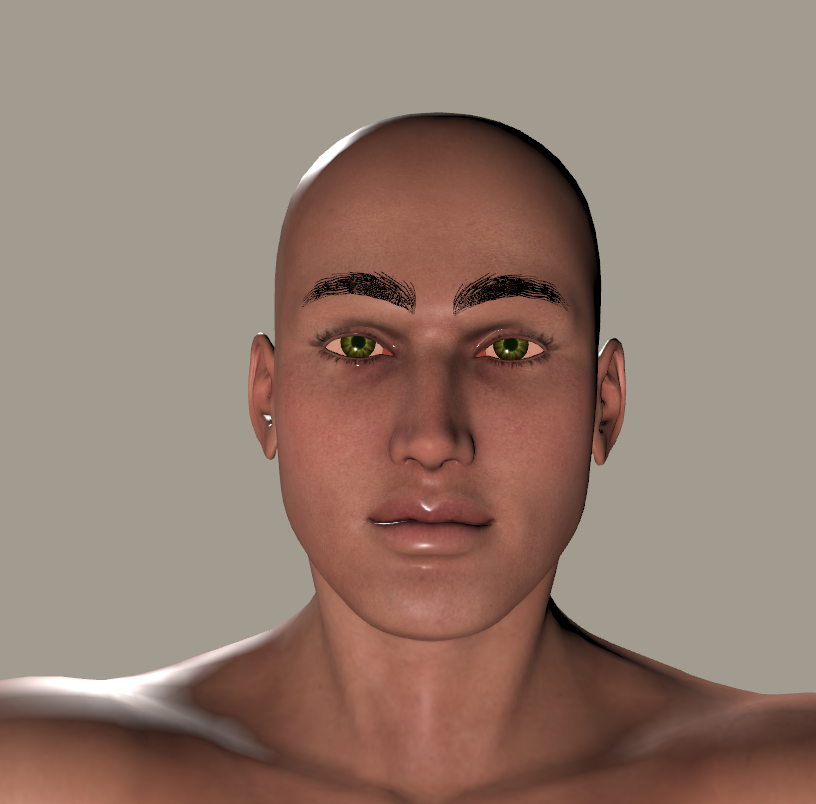 This is something I'm curious about as well, but more specifically with eyelashes. Anceata (by Nursoda) comes with a separate eyelashes figure that will conform to the base figure, but it doesn't really follow any movement or shaping changes I make to the base figure's eyes. So it's only useful in a limited number of situations. I tried making something similar for Telka (another Nursoda figure), but I couldn't come up with a solution to the problem that the lashes don't adapt to changes in expression or face shape, at least not in the way conforming clothes would.

I suspect what makes things like lashes and eyebrows different from conforming clothes is that they're not actually based on (or shaped like) the geometry of the underlying figure. Meaning, you're not making eyebrows to go on top of eyebrow geometry that already exists, nor was I making eyelashes that would go on top of existing lash geometry in the base figure. So that would probably be why copying morphs over would have very little effect. That means the eyebrow or lashes would need its own custom morphs that are linked into the relevant morphs on the base figure (I guess that's a kind of JCM?)

It occurred to me that it might be helpful to look at how solutions for mustaches and beards work. But then I realized that the base geometry for a beard would basically be the same as the lower part of the figure's face. So, with that much similar geometry to work with, shaping and expression morphs would probably transfer OK. A mustache would be trickier b/c its "base" geometry would match a much smaller area of the figure's face, but it's been done. Eyebrows and lashes, however, would only match a much smaller area!

At least, that's as far as I got in my thinking on the subject before I got distracted by something else. I mostly make props and simple clothing for my own use (and for freebies), so there's a lot about rigging and JCMs and so on that I don't know much about. So I look forward to seeing if more experienced content creators have a solution for the problem you described!

Contributing Artist
If it's a figure, I would think it should work something like setting up a superconformer (?). While I have read a bit years ago, I have zero practical experience with it.

Contributing Artist
They are super conformers, drag and drop them and they are on Dusk but the head shapes and expressions and eyebrows morphs do no follow along. I THINK, IIRC that Paul helped me out a while back but from the DAZ Studio side of things and that was even confusing and laborious! One thing I can't wait for are the chips to be in Dusk 2. On Genesis 8 they have them and super conforming items like beards and eyebrows just work while in Genesis 3 with no facial chips I was back to square one with allot of extra work. Not sure if this will work as expected with L'Homme as he and La'Femme have these chips. Not sure though if they are set up similarly as Genesis 8 chips. If they are then I may have to scrap what I have planned for Dusk 1 and switch over to L'Homme for the time being.

Richard, I use a lot of fiber mesh especially in Daz studio. My biggest struggle is that you have to use a fairly thick fiber mesh in order to let it render quickly. The thinner the fibers the more grain and longer the render times.

In this picture I have used fiberbrows and was a nightmare to render on my 2gb gpu.

And yes this is dawn. Now I am back again and flcan work faster with my much better rig.

CV-BEE
Ohhh, what character is that? I like her.

Yes, a better rig is always a big plus. I had to do that 7 months ago when my 8 year old Quad Core Win 7 laptop (with no GPU) practically died. Now this new-ish Win 10 Hex Core (and GPU) makes doing anything so much faster.

Aylaaenas_Evenwing said:
Richard, I use a lot of fiber mesh especially in Daz studio. My biggest struggle is that you have to use a fairly thick fiber mesh in order to let it render quickly. The thinner the fibers the more grain and longer the render times.
Click to expand...

That's the renderers fault though. Vray is much better at rendering fibers.

Miss B said:
Ohhh, what character is that? I like her.

Yes, a better rig is always a big plus. I had to do that 7 months ago when my 8 year old Quad Core Win 7 laptop (with no GPU) practically died. Now this new-ish Win 10 Hex Core (and GPU) makes doing anything so much faster.
Click to expand...

I never made this one public. Made her and hair a long time ago.

Aylaaenas_Evenwing said:
That's the renderers fault though. Vray is much better at rendering fibers.
Click to expand...

I know. I use iray most. But to be honest vray is easier to set up so is Corona render and Arnold

BTW I have an idea that might work regarding the eyebrows. I will test it later when I get home

I was watching a YouTube video and there was this interesting example of eyebrows made from hair cards but tinier and just skewed enough to make it look like once transmapped it would look fairly natural!

yes i know that one. That is a trick i have done often. Its the game model trick lol. it works but it slows down superfly a lot( not nice with trans maps lol)

For me it is not hard to make the eyebrows, it is the thickness i struggle most with. I want the hairs as thin as possible. I even once sculted every single hair seperatly. It was a long process haha

in this picture i used a lot of fibermesh, even the hair model is made out of fibermesh but made thicker strands. Unfortunately the gpu was only 2gb so i couldnt make some fibers on the cloth. The peach fuzz was taking up all the video memory. This was done in Poser superfly and took ages to render.