Contributing Artist
I have rigged a tail in Poser, and added ERC posing controls using EZPose Underground. Everything works fine, except for the ScaleAll and ScaleZ dials. Whenever I use any of the cascading scaling options, the joints loose curvature as can be seen below. 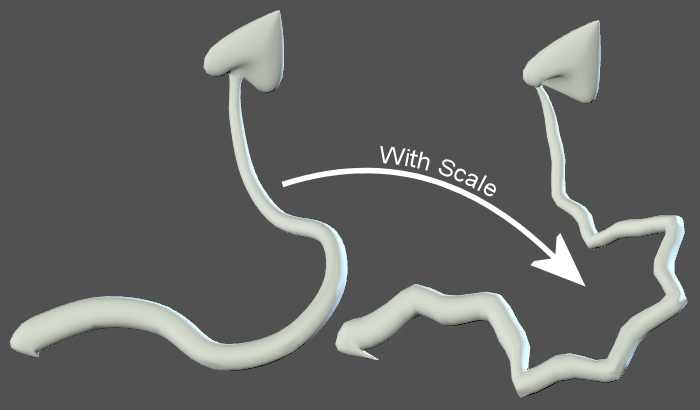 I have tried adjusting the Smooth Scaling Zones (per joint), but they seem to have no effect over this. My first suspicion was that scaling was making the next joint in the chain to get out of bounds with the scaling zone gizmo from the previous joint, but if that were the case, converting them to weight maps should fix it, but it doesn't.

I then remembered that Smooth Scaling Zones in Poser use both weight maps AND the old-school gizmo, but adjusting both of them has no effect on the distortions. I have then examined other tails that seem to work well with EZPose scaling, but found no difference between them and my model. Rigging-wise, they seem identical.

Then I thought this might be a bug with Poser 11, so I have rigged the tail again from scratch in Poser 10, and got the exact same results. I tried rigging the tail by hand on the Setup Room, and also with Hier files (old school), but both resulted into the same issues. I was pretty much convinced that converting the joints to weight maps and adjusting the Smooth Scaling Zone gizmos would resolve the scaling issues, but nope.

It must be something else, but I ran out of ideas. I would appreciate any hints on what could be causing this, or if you know of something I haven't tried yet.

Contributing Artist
Ok, so under further examination, I was assuming the problem was with rigging, but it was something else. There is an EZPose option to add a "curve" dial on each of the chained joints, and I thought that was related to the rigging method that carries the same name "Curve". It comes down the 2 things were unrelated.

The "Curve" rigging method is just to better handle the rigging over long strings of chained joints. The "Curve" dial on each joint (apparently) controls how the joints bend when scaled. EZPose doesn't create a master control for these dials, and trying to adjust them over a long chain of joints is impractical. I have created a new master dial to control them all from body, and now I can remove the zig-zag distortions that appear when scaling is applied. This way, scaling will still distort the tail as seen above, but we can remove the distortions by adjusting curve master dial I have created.

What I still wonder is why some tails don't distort when scaled up or down, to include a tail I have created many years ago. I have created this one exactly the same way, but it has this issue with scaling that require manual adjustment (only if scaled).

Contributing Artist
The curves master dial I have created seems to fix the spiking issue with EZPose scaling dials, though it has to be manually adjusted, and the amount it requires varies with the scaling amount that is applied.

If you are reading this, and you have used a conforming EZ Pose tail before, do you usually scale it with zScaleAll or ScaleAll? If so, did it distort like this? I am wondering if this is common. The amount of distortion is way more visible when using zScaleAll, probably because it scales all in a single direction. ScaleAll also causes distortions, but it takes more scaling to start distorting.