Archetecture from the archives

I was looking through my Lightwave 9 archives and came across this stuff.
It was going to be a set of Poser props called Contemporary House Kit.
Another kind of modular idea. There's a bunch of walls, a window, some kitchen stuff,
and a washroom.
This goes way back. Couldn't remember why they never became props.
So I exported a couple of items to obj and imported them to Poser.
Found out they looked messed up, not smoothing right, so went back in Lightwave
and checked out the geometry.
Seems that the surfaces were not set up right, and there were no UV maps.
So I fixed that stuff and tried again and now when the obj's are imported into Poser
they look pretty good.
Decided to share these as objs by zipping them all up and posting them here.
If anyone makes DS props from them I would be interested to know how they work out.
Or even if they can be used in Blender.

CV-BEE
Thank you sir. I'm a bit tied up today, but I'll be happy to check them out in Blender later today, or tomorrow.

Haven't recently built anything with them.
Just curious to see how the files would work in DS.
My design techniques have changed a lot since those props were first made.
What I'm curious about is why adding UV's made all the difference in Poser, from geometry that wouldn't look right at all, to looking fine.
On some things it makes no difference if they're mapped. ???
If the source files work well in DS I can make a habit of including them on my website.
S

I'm not sure whether anyone answered your questions re DAZ Studio, StudioMartillo, but I tried them out and didn't have any real issues. At first I imported them at Lightwave scale and they open fine, but come in a little too small compared to DAZ figures. Not a big issue since they can easily be scaled up. Importing them at Poser scale works better, although some scaling adjustment is still required. The materials also load okay, but, not unexpectedly, the materials need some adjustment within DAZ Studio as well. This is normal when using Poser materials in DAZ Studio. I just used some DAZ Shaders to replace the surface settings. Pretty quick and easy, really. Anyway, here's a quick render of the sink, faucet and stove top using the 3Delight render engine. 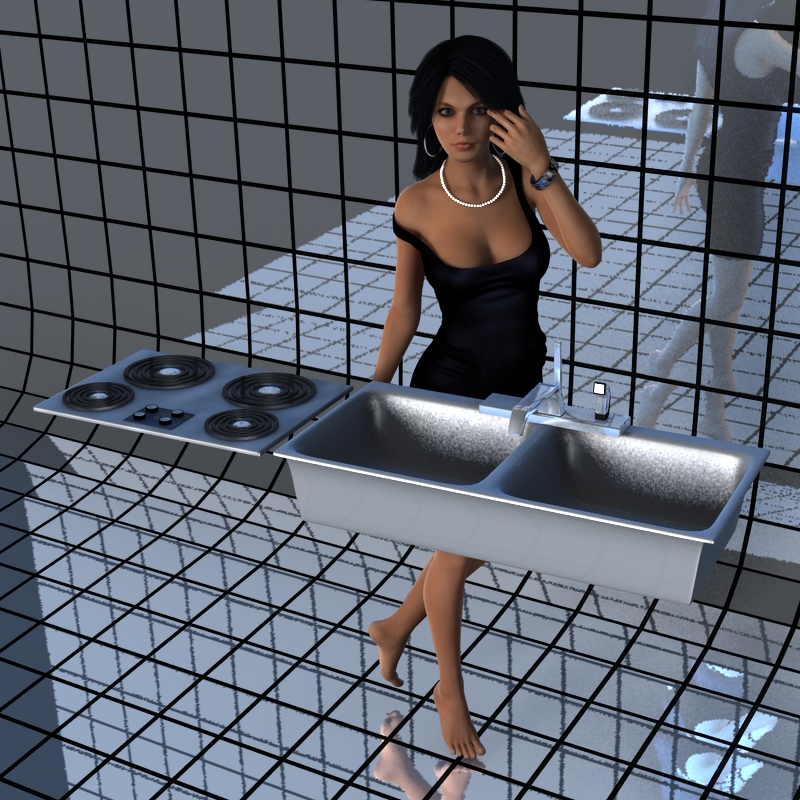