We are excited to announce that Laurie Prindle (CWRW) is continuing her yearly tradition of raising awareness for a worthy cause with the
5th Annual Cloud Foundation Sale.

We love the idea that a passion for 3D art can also be an effective part of preservation of a species as well as inspiration for the wild, free-roaming spirits within ourselves.

HW3D - Why is the Cloud Foundation important to you?

CWRW - I first "met" Cloud the wild stallion, like many others, through the PBS Nature show "Cloud: Wild Stallion of the Rockies", back in the 90s. I was very moved and awed by the life of this wild stallion and his family and herd. The wild horses are such a huge symbol of the West to me as well, having in lived in Colorado for almost 30 years now. 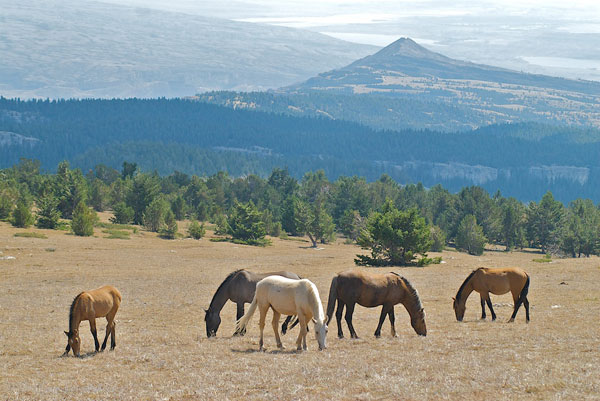 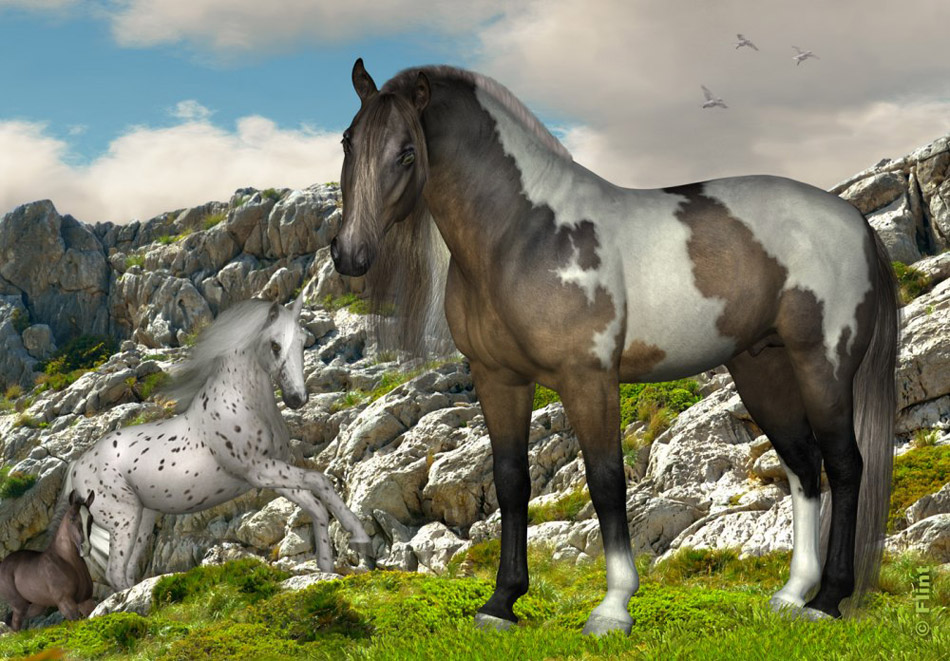 CWRW - They share grazing land with commercial livestock. Much controversy surrounds the sharing of BLM land and resources by both the free ranging horses and the livestock of the politically powerful ranching industry, and also with the methods with which the federal government manages the wild population numbers.

But back to Cloud ... I followed his life through the next two PBS films about him and then I got to "know" Cloud more intimately back in 2008 when I started designing the annual Cloud Foundation Calendar with Ginger Kathrens, founder of the Cloud Foundation, and renowned wild horse photographer Carol Walker, whose stunning and insightful photos grace the yearly calendar.

I also designed the book "Wild Hoofbeats: America's Vanishing Wild Horses" and "Galloping to Freedom: Saving the Adobe Town Appaloosas", by Carol and so became much more aware of the plight of these noble beings. 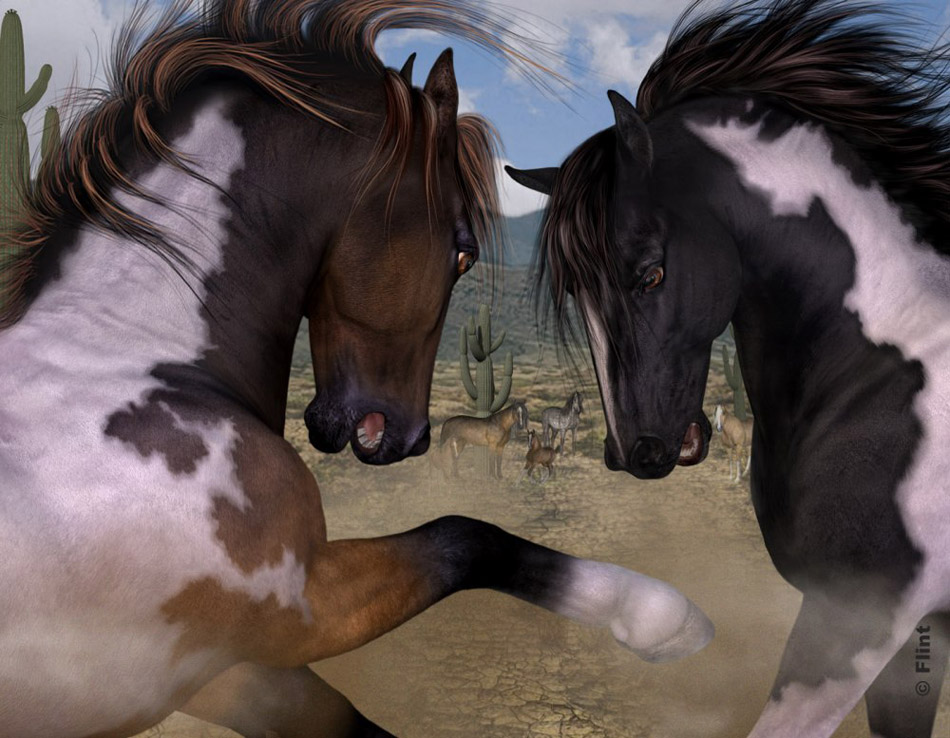 Some lucky few are adopted, but they are very much the minority. The family members not rounded up often experience more hardship without their band stallion to protect them; foal's mothers taken from them before they are weaned and so on. There is very much an emotional toll on them as well- wild horses live a very rich emotional life.

I personally support The Cloud Foundation as they are doing all in their power - often in tandem with other wild horse groups- to save these magnificent creatures and their native homes across the west, through education, legal actions, events and more. My dream someday is to meet Cloud and his family in person in the Pryor Mountains on the Montana/Wyoming border.

Without all of the hard work of The Cloud Foundation and other wild horse organizations, the fate of this grand symbol of freedom and the American west is grave.

CWRW - Become aware and get involved. The majority of public lands in the United States are held in trust for the American people by the federal government and managed by the Bureau of Land Management (BLM) and other government agencies. Become aware of what these agencies are doing on our behalf when it comes to managing our natural resources and get involved and lend your voice to help find solutions that can work for all.

Understand the issues from all sides. The plight of wild horses and burros is a highly emotional one for many so it is important to know the facts around the issues as well as the actions that are currently being implemented to be effective in providing ideas for alternative solutions.

It is more critical than ever to let your voice be heard: Congress is back in session and the 2018 Budget will be under consideration. Over 46,000 wild horses and burros currently in short term holding and long term holding plus over 46,000 right now still on public lands but deemed “excess” by the BLM are at risk of being killed or sent to slaughter.

Communicate and donate what you can, either in time or resources, to add your voice in support of those who are working daily to save America’s wild horses.

A portion of the proceeds from the sale will be donated to The Cloud Foundation. 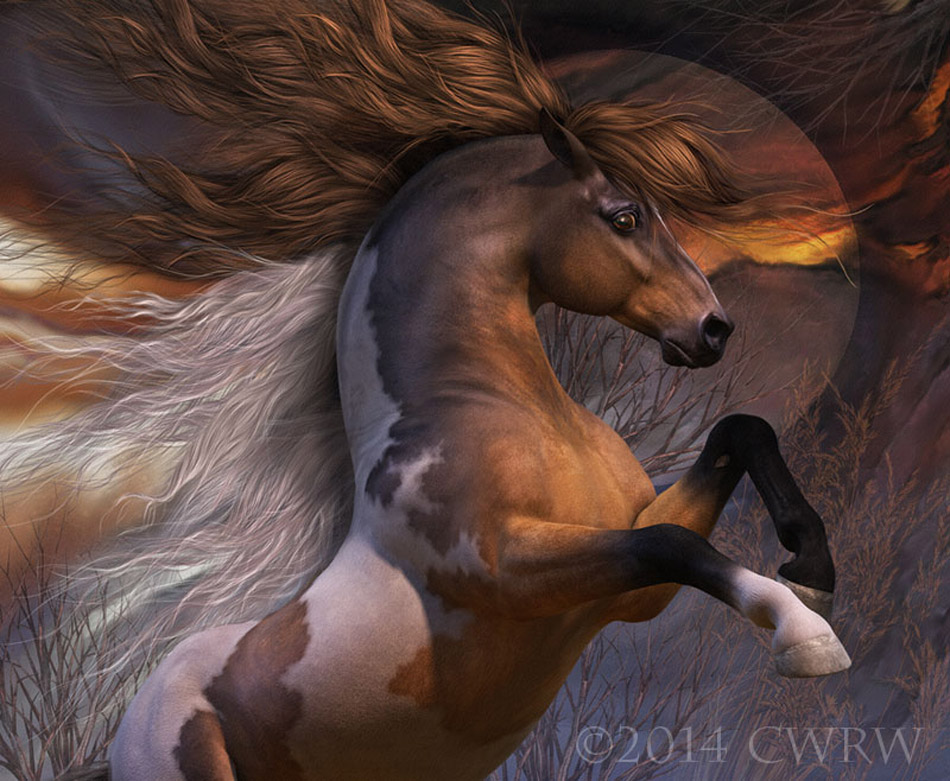 Contributing Artist
Thank you for continuing this tradition and highlighting the Wild Horses issues. We have wild horses here where I live (on a reservation) that we see from time to time they are such wonderful creatures.
You must log in or register to reply here.
Share:
Facebook Twitter Reddit Pinterest Tumblr WhatsApp Email Link
Top