ZBrush 2018 is released and ready to download from about now. Details here: ZBrush 2018 Has Arrived!

Contributing Artist
Already downloading...and doing a happy dance as it's another free upgrade...great start to two weeks holiday. I'm like a kid in a candy shop. I don't know which link to press first.

Contributing Artist
Been waiting for the Sculptris mode ever since they bought Sculptris. I just looooove it!

Contributing Artist
Been doing these 30 min sphere challenges to my self. fun fun fun. hehehe.. 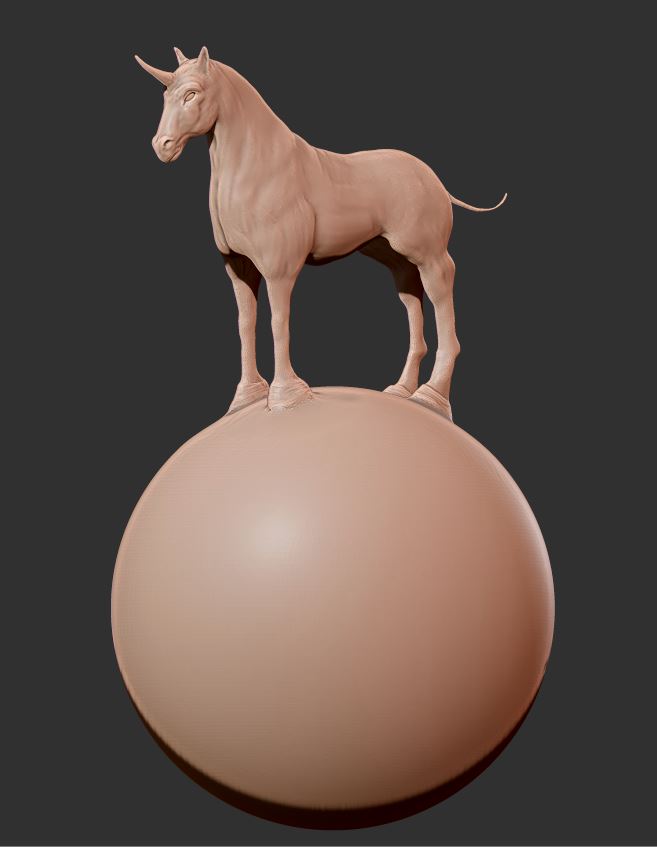 I am downloading and installing it now.

HW Honey Bear
What, precisely is the advantage in upgrading?

This is some of what is at the link Bonnie 2001 gave at the top of thread.

Contributing Artist
That's awesome work ghostman!
@JOdel...sculptris mode is very useful it will add in more geometry to specific parts of the mesh as you work.

Pendraia, would you mind telling me the server you used to download Zbrush and around what time Australian did you choose ?
Thanks for any help

Pendraia, cancel that request, I managed to get it downloaded.

Bonnie2001 said:
ZBrush 2018 is released and ready to download from about now. Details here: ZBrush 2018 Has Arrived!
Click to expand...

I'm hoping to have better luck with Sculptris, as that's now been built into it.

If you own ZBrush, then the upgrade is free.

Contributing Artist
Sorry I didn't see your request earlier Dove. I'm glad you managed to work it out. I just used the first installer and I downloaded it Friday morning...haven't had a lot of time to play yet due to family commitments. So I've mainly been watching the videos in the classroom and at pixologic.

Aside from the upgrade being free and the other new things (see Daniel's post above), Sculptris is the main advantage. Dynamesh is dead, Sculptris updates the mesh as we work and is a really big deal.

Contributing Artist
I like polygroup it as well...I can still see a place for Dynamesh but I do love sculptris mode.

Contributing Artist
Dynamesh still have it's place in the workflow. Together with SculptrisPro it's really good to establish the basis shapes. It's very easy to overwork the mesh with Sculptris so that the mesh gets too dense.
Work slowly to establish the shape you want and then when you think it's done you can start dive in to make the details. It's very easy to overdo it. For prints it's no biggie though.

Ghostman said:
It's very easy to overwork the mesh with Sculptris so that the mesh gets too dense....
Click to expand...

Yes but we are going to ZRemesh it to a lower poly count anyway, or use the improved Decimation Master which now has custom presets so we don't have to trial and error as much to get a fairly precise poly count.

I've been giving the new ZBrush features a good workout and I have some observations that might be useful for others here. I'll add more if I find any, and others are welcome to post their findings here too.
Okay, here we go:

1. For those like me who get annoyed when opening a palette and seeing the last one opened closing up (meaning only one palette at a time can be open), I previously used a workaround of holding Shift when clicking a palette so that each one clicked stays open. Now there is an option in ZBrush 2018 (which I don't think was there in 4R8) to do just that without holding Shift. Just go to Preferences>Interface>Palettes, then untick "One open subpalette" and you are set. Oh, and click on "Store Config" so ZBrush remembers this every time you open the program.

2. Sculptris Pro is super, really super in my opinion. But not all the brushes work it, particularly the Move brushes (Move, Move Topological, Move Elastic) which is really annoying as the Move brush has to be one of the most used. Now there is a new Snakehook 2 brush, which essentially works like a Move brush with some nice extra functions. For instance, you can smooth away geometry almost like sing an eraser!

3. The main and secondary colour swatches are in the wrong spots, secondary swatch on the left and main one to the right of it. It was like this in 4R8 and is very annoying, 4R7 had the Main swatch on the left (like in Photoshop) which is I think the natural way to do it and I really don't know why Pixologic didn't leave it alone. Fortunately we can swap the swatches around by going to Preferences>Enable Customize and then holding Ctrl+Alt and dragging each swatch to its traditional position. Then Store Config and Save UI so they stay there next time you open ZBrush.

4. The Polyframe icon has a line fill On/Off setting, which basically give us wires view without the polygroup colours. I don't remember if this option was in 4R8, but I think it is new for 2018.

5. Sometimes when I click the Maximize icon to maximize ZBrush, instead it opens another instance of the interface, which appears to be a bug. Closing the dupe interface shuts the whole program down, so instead of closing it we need to Maximize it instead and it goes back to one instance open.

6. Beside the ZAdd uttion, there is a ZCut one. It took me a while to find out in the Pixologic Docs that this only works in Draw mode, not in Edit.

That's it so far from me!

Contributing Artist
Thanks for the info Bonnie...I did know about the shift trick for keeping pallettes open...nice to know it can be set that way now. I'm still installing content from Hivewire at the moment so haven't had a really good look at things yet.