Who Shall it Be?

These are the contenders based on characters I created for my use.

In no particular order ...

Liam O Tuathail, a wee bit of a Steampunk Lioprachán. 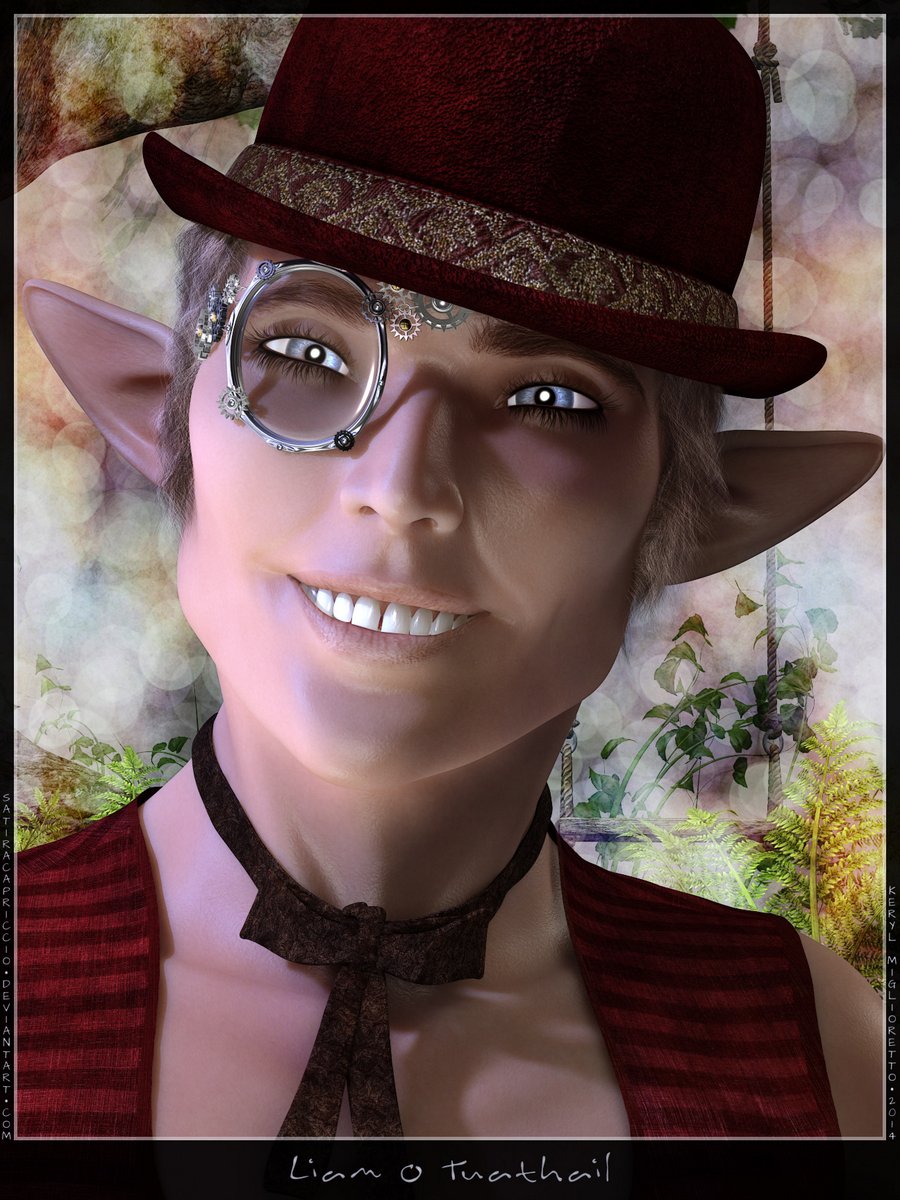 Elf with no Name (He never shared his name. But he's my last choice.) 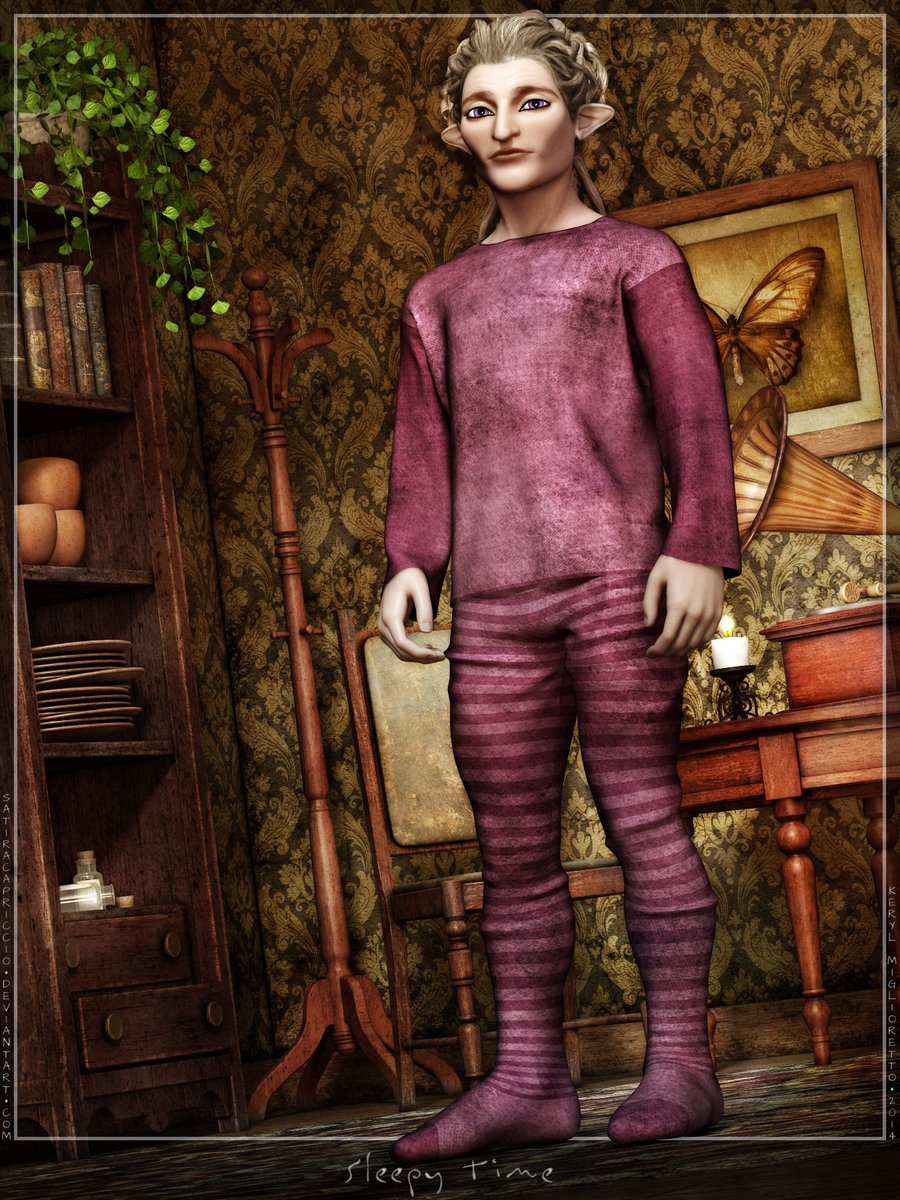 Sad Tiny Dwarf Giant. Another who did not share his name. He's next to last on my list. Though, I do love his rather unique features. 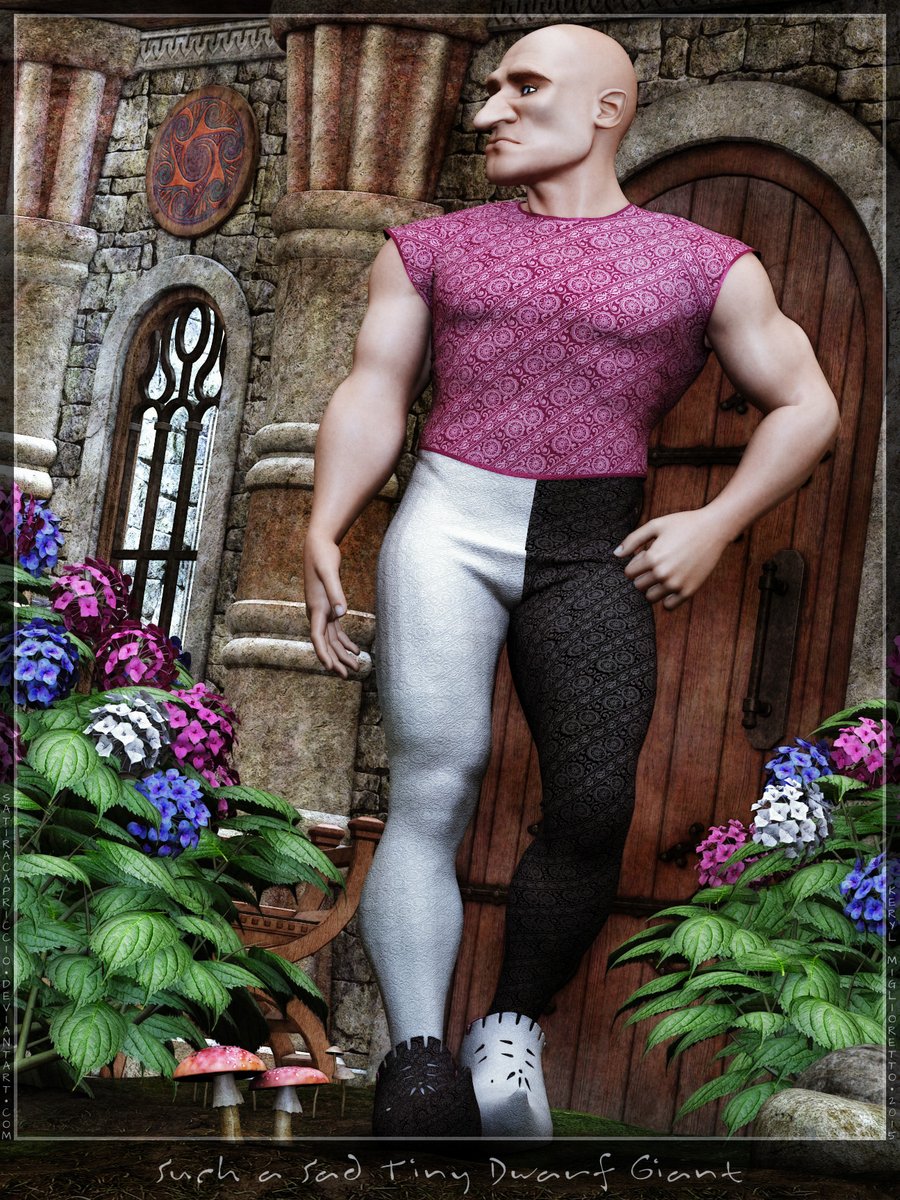 The Gardener ... who finally identified himself as Stephen. 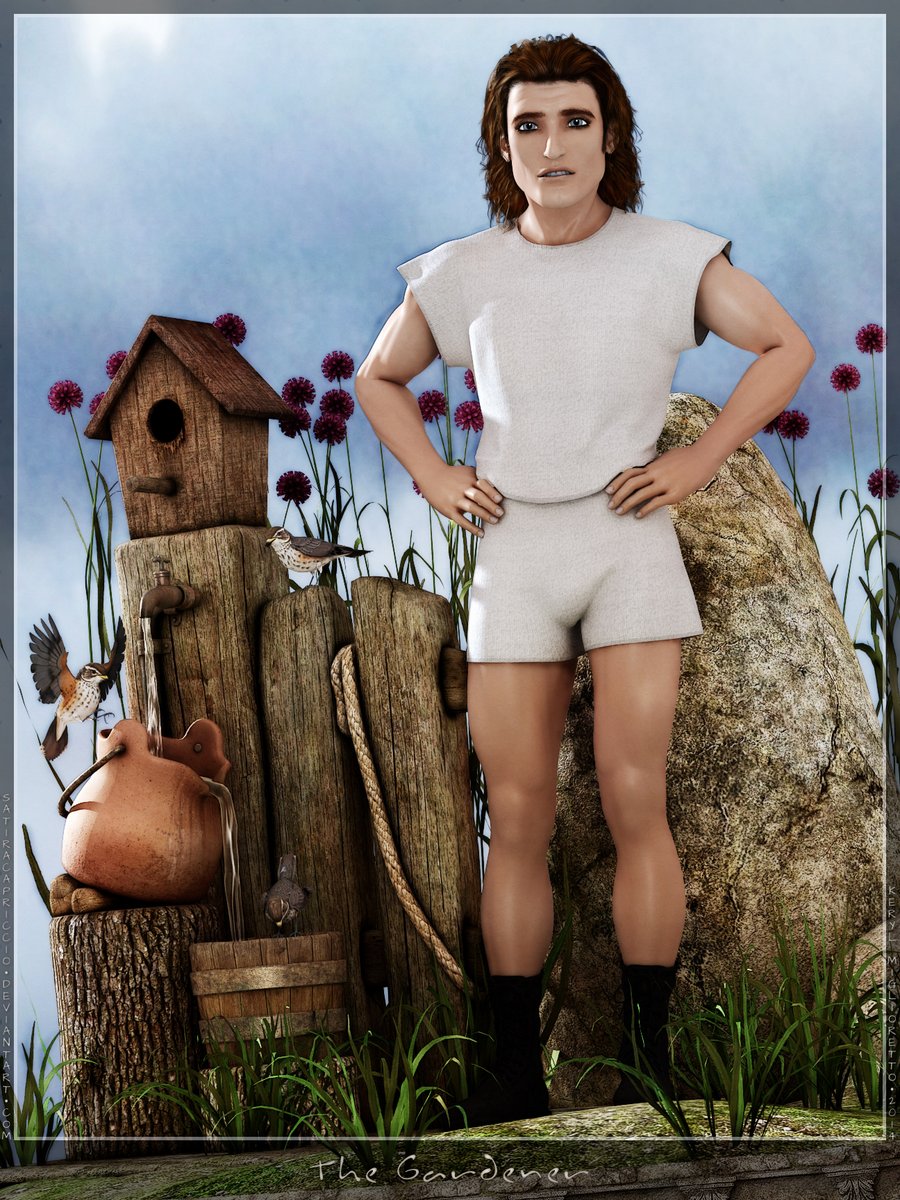 Thulian Mountbattan. Named after the two pinks in his clothing. If I remember correctly, both he and Liam are wearing Poser hair. 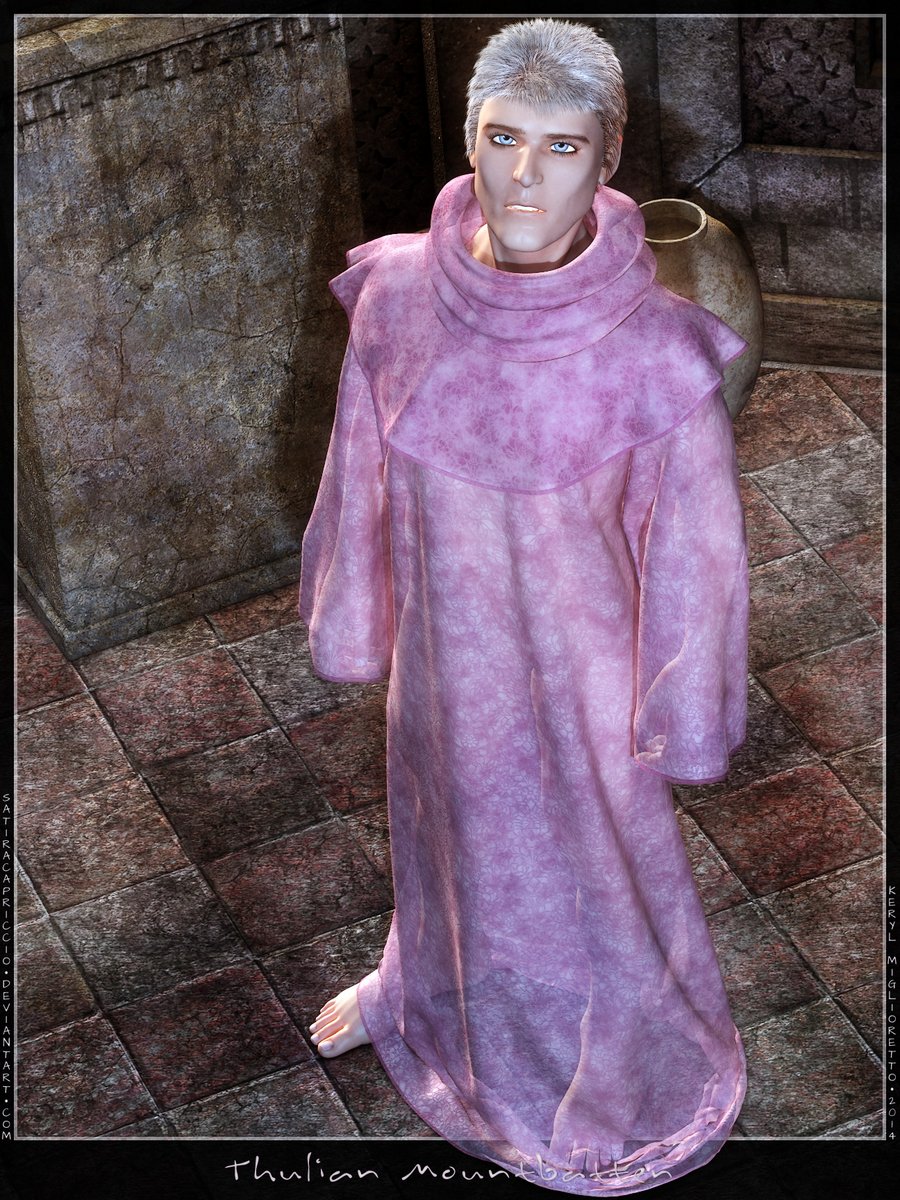 CV-BEE
Contributing Artist
Well now, I wasn't quite ready to post. But Tsuki decided it to post for me.

She probably knew best as it is time to leave for work. I'm leaning toward Thulian ... simply because he's more likely to appeal to most people ... being rather non fae.

Liam will make an appearance though one day. Wearing his own clothing rather than M4's Wanted DOA.

All these characters are really wonderful. I love your work!

CV-BEE
Thulium is my fave, quite a hunk

Stephen would certainly be fun, and Dusk does need "sweats," even if these are nearly short shorts :wink:

I love Thulian's robe and cowl, although, it's gone through a number of changes, including a Dawn version. I haven't yet tried to save Poser hair as a prop, so that will need to be successful with Thulian. He also needs a pair of shoes. I have a couple pairs I created in MD that may well serve as a start or basis for a new pair of shoes.

CV-BEE
Well, I like Stephen first, and I'd vote for Thulian second, though a close second.

QAV-BEE
Contributing Artist
Thulian is my first pick, then Stephen.

It's interesting when..... the characters we make or use start to have a life of their own.

As you said, Stephen suddenly told you his name. Now, you have to start doing his back story.

Those that know me, know about my Pixie, her sister Pixidora and her little girl, Little Pixie. They all have back stories now. In fact a lot of people remember Little Pixie from the DAZ March sales when she used to post renders about people making clothes that didn't show her mum's bum off!!! Lol.

I look forward to seeing your characters come to life.

Yes indeed. Some characters are more forthcoming with their names and history. Others tend to be secretive.

It's truly amazing just how different, and sometimes strangely alien, our characters can be.

Contributing Artist
I'm probably a bit weird but I do like the more unusual and Liam really appeals but Stephen and Thulian would both be good.

Contributing Artist
Liam has so much personality, I love him. But if you were to ask which of these I would be more likely to buy I'd say it would be Stephen.

HW Honey Bear
Stephen gets my vote. The more unique (and the less like out-of-the-box) the better.

CV-BEE
Contributing Artist
If I recall correctly, I believe Stephen is also a bit on the shorter side.

I managed to get some promotional renders done this weekend so should start putting the images together this week. Then I just need to do the writeups and I can get those two products submitted.

At this point, I'm thinking Stephen. I need to check whether I have any gardening tools/supplies in my runtime.

CV-BEE
Wilmap has a gardening package at her free site, Satira.

CV-BEE
If I'm not mistaken, Wilmap only does DS, and Satira only does Poser.

CV-BEE
Shucks, Miss B, you are right. Doh!

I have to ask, was Robert Pattinson's character in Twilight by chance an influence in Stephen?