I have had quite a bit of experience importing Poser figures into Vue, using SkinVue, wrestling with material settings in Vue (and the Poser rendered inside Vue), and all sorts of other fun stuff integrating the programs together. If anyone has questions, please ask. Do we have any other Vue users here?

Contributing Artist
I've always wanted to learn how to use Vue...unfortunately I only have the pioneer version that I picked up over at Daz.

CV-BEE
As a long time Bryce user, I always wanted to play in Vue too, as so many would classify it as Bryce on steroids.

Unfortunately, I never got past Vue5, and couldn't afford the added cost of all the addons I thought I'd need.

HW Honey Bear
oooo I'm always "threatening myself" with getting BACK into Vue... since I have now exhausted my use of Howie's Carrara scenes (as I could NEVER set up a scene in that program, it scrambles my brain!!!!!!!!!) So now I'll know where to come ask questions!

I love Vue but never got past a pretty beginner level in it and haven't had a chance to play with it in a while. But like Lyne I've been wanting to get back into it, and I'm glad you're here, HakDragon. Thanks for starting this thread!

Glad to see that this thread is here! I started into Vue earlier this year (it was on sale...), and am still wrapping my head around the material settings. I'm sure I'll be back with a question sooner or later...

HW Honey Bear
Recently I've talked with a friend on how much BETTER Vue handles GLASS than poser... and again I went looking... but all I see now for sale at e0n is Vue 2015! eeek! I need to find out if it's still "too new" so the users are actually beta testing it for them... I will NOT buy a vue that is not really FINISHED... but am wanting vue more now... I need to hear from some vue users... (and read up on Rendo's vue forum)....

Lyne said:
Recently I've talked with a friend on how much BETTER Vue handles GLASS than poser... and again I went looking... but all I see now for sale at e0n is Vue 2015! eeek! I need to find out if it's still "too new" so the users are actually beta testing it for them... I will NOT buy a vue that is not really FINISHED... but am wanting vue more now... I need to hear from some vue users... (and read up on Rendo's vue forum)....
Click to expand...

I've had Vue 2015 (Studio; couldn't afford Complete...) for over 6 months now. As far as I can tell it works great. It does a really good job with glass too. It takes a while to render with, but I think that's mainly my computer...

However, I have had HORRIBLE luck with using Poser shader tree when importing Poser scenes. The end result looks NOTHING like what Poser shows. I was actually going to post a comparision here to ask for advice, but just haven't gotten to it yet; the scene is still rendering...

Poser rendering inside Vue is very hit and miss with Vue. For some things, it is good enough, for others it is bleh. SkinVue is highly recommended (but buggy), and taking time to learn the Vue material system for the areas that need help are my best recommendations. There are so many little things and materials when importing, you need to pick where you will get the most bang for the buck. Fussing over a tiny metal stud when the huge area of skin would give you the best return for your time is the sort of fights you have to pick.

Also, pick a consistent style of skin shader for your characters, different artists' characters will come out differently (based just on how the artist sets up the Poser materials and how those come out), so you may need to roll your own skin materials or stick with an artist that has a consistent style that comes out good for you.

I don't have Vue Skin as I don't render many figures in Vue but if you aren't worried about getting skin to look more real you don't need it. This was done with the normal material settings in Vue Esprit 10 sometime ago. I now have 2014 Complete with the Advanced Graph which opens the material settings more. Figures set up in DS and exported as OBJ at a scale of 10%.

That's a funny as a fit render you did there, Szark Gorgeous water!

I used Vue for a while and and then stopped at Vue 8 as it would fall over on a regular basis on my system. I also got feed up with buying the main program and slowly adding all the add-ons, only to find they would not work in the next version.

A year or so ago I said the same thing on another forum and someone suggested I try Vue again as it had changed a great deal. I finally stumped up for the studio version as that included most of the add-ons I wanted. I then opted for the monthly subscription so for around $8 and month (depending in the $-£ conversion rate) I get the latest version when released. I normally hate subscriptions but in this case, if/when I stop paying I still have the latest version of the software installed.

I find Vue 2014 great to use and 2015 is even better. The only problem I have with 2015 is, every so often, I import a clothed figure and the clothes are there but the figure is not. If I rebuild it will often correct itself but more often than not I just move back to 2014.

I still user Poser for my portraits and indoor scenes but move to Vue when I want my characters to move out into the wider world. As this normally entails figures from a distance so the skin tones are not critical.

This is the first render I ever did in Vue 2014. The cove was a purchased scene as I was trying to see what Vue was capable of. Unfortunately the figures are V4 and M4 but Dawn is set to wander the Vue world quite extensively in the coming months. 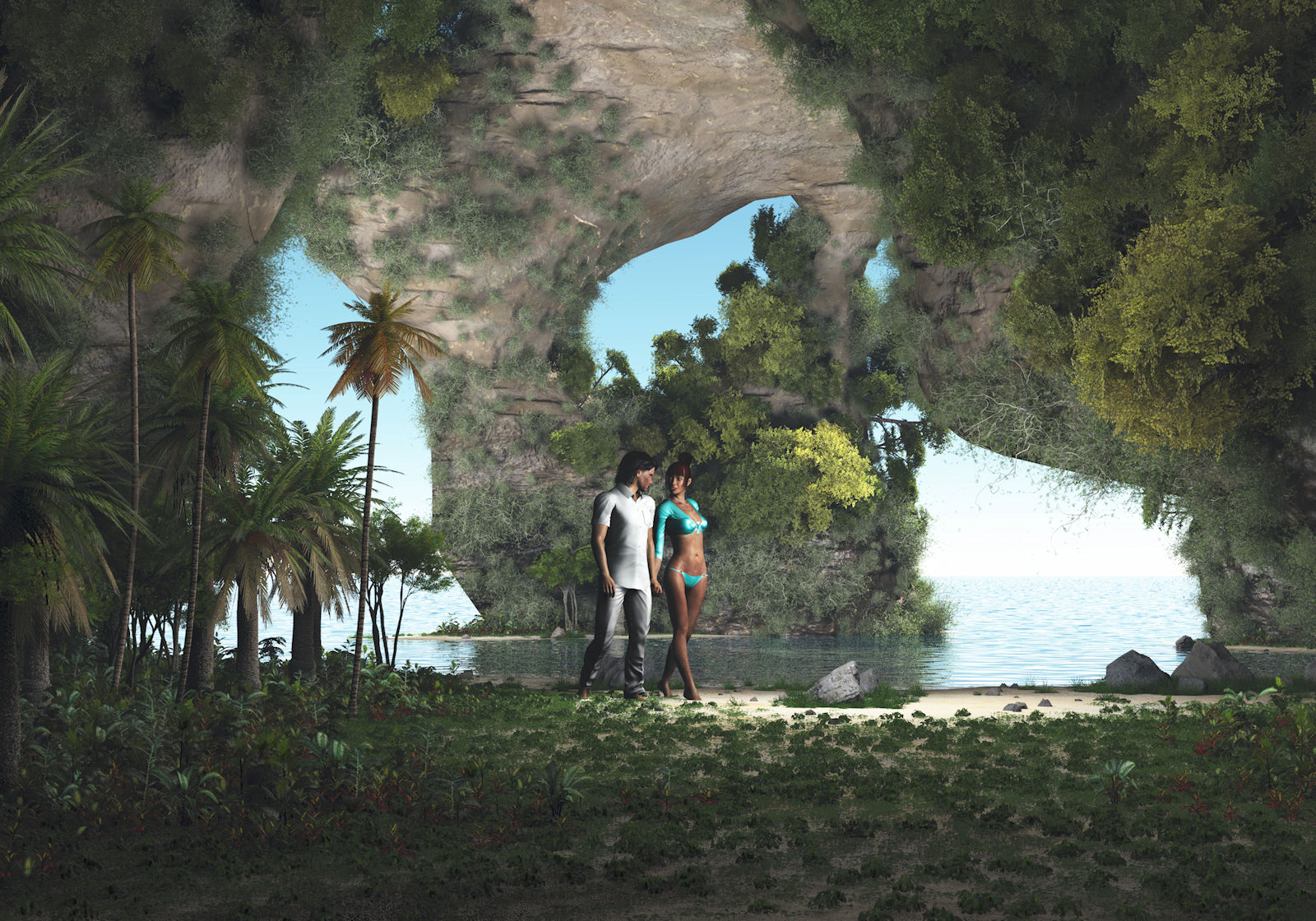