HW3D Exclusive Artist
I’ve had enough interest that I decided to give a quick tutorial on using Poser Atmosphere effects. So here it goes... I threw together a scene with a good mix of background, mid-range and foreground objects and rendered it... 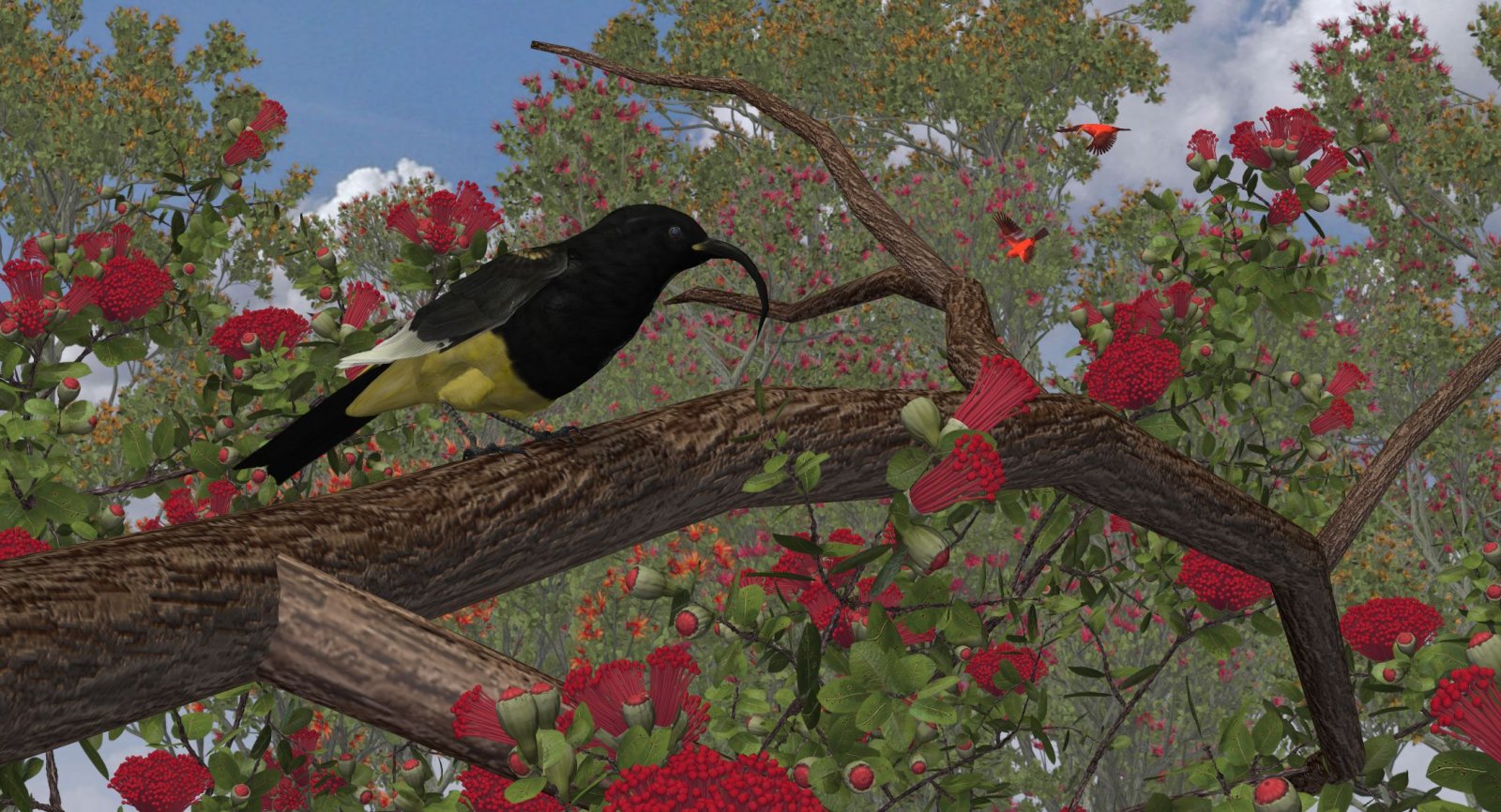 It’s not bad, but could be better using Atmosphere, so let’s go into the material room and add some. Click the “Object” dropdown list and select ”Atmosphere”. In the Atmosphere settings, you’ll need to click the “DepthCue_On” checkbox. Also, you’ll want to adjust the “DepthCue_Color” and “DepthCue_EndDist”. 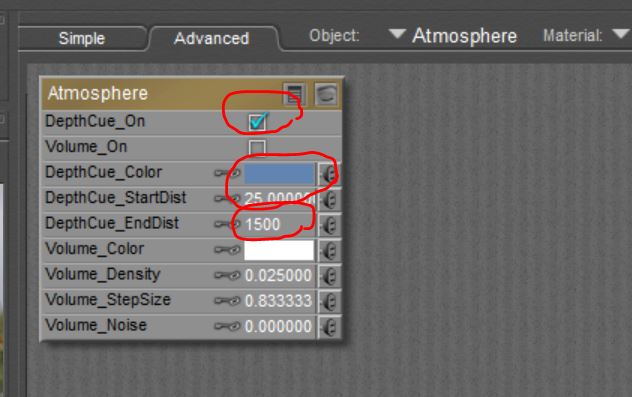 The “DepthCue_Color” is set to a default Black. This is fine if you want everything in the background to fade to black, but more commonly you’ll want this color to be the sky or room light. A light gray or white will give a nice haze or foggy look.

The “DepthCue_StartdDist” and “DepthCue_EndDist” will vary from scene to scene and require some trial and error. I usually start with an “EndDist” of 1500 to get my bearings and render... 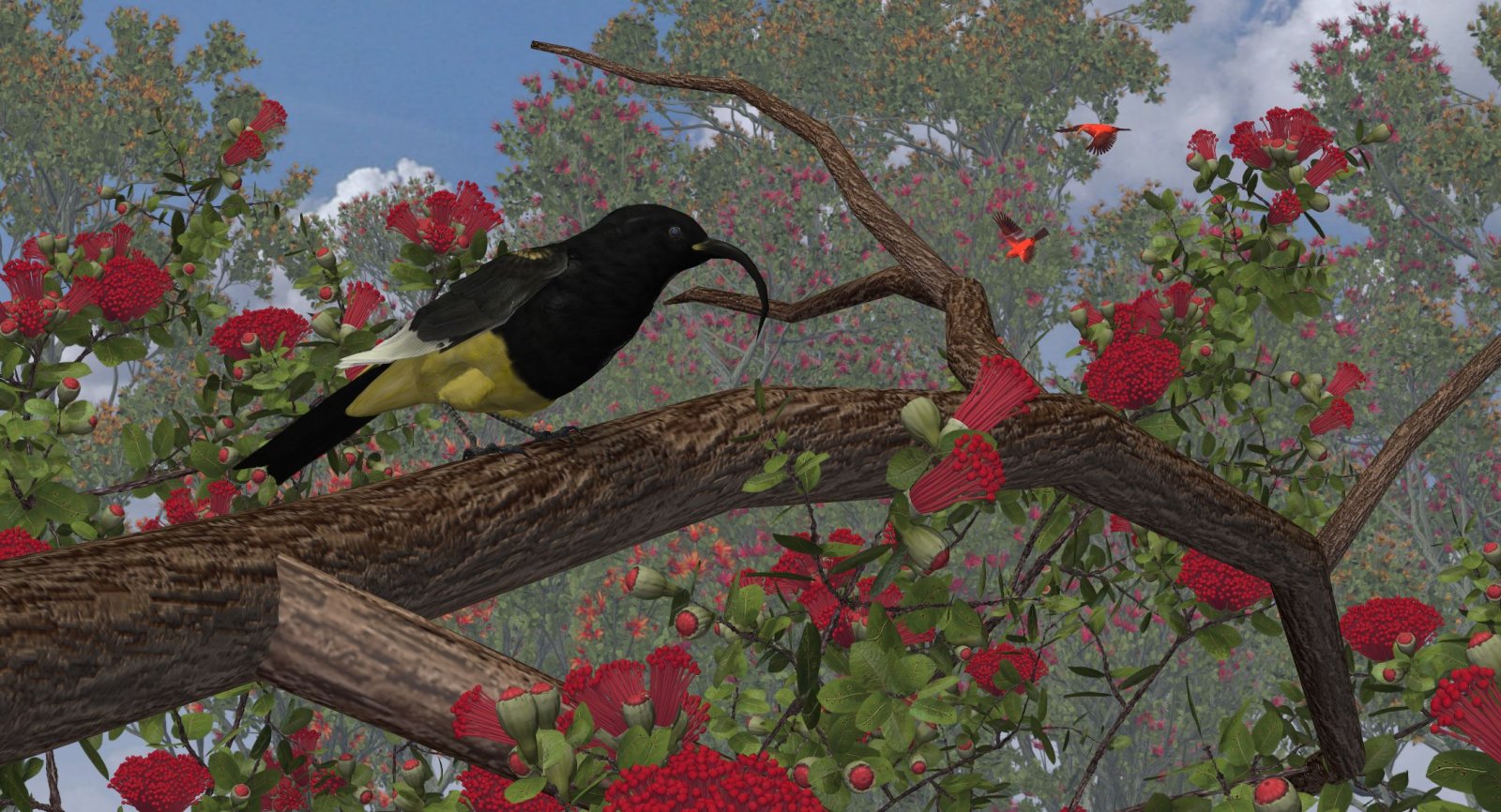 It’s looks okay but could be better. The back trees are showing some depth but the mid-range birds aren't. I think they should show some depth, so let’s try lessening the “StartDist” range and shortening the “End Dist”. Also, let's try lightening the “DepthCue_Color” a bit... 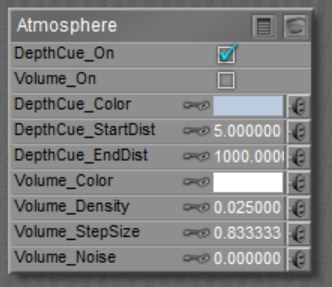 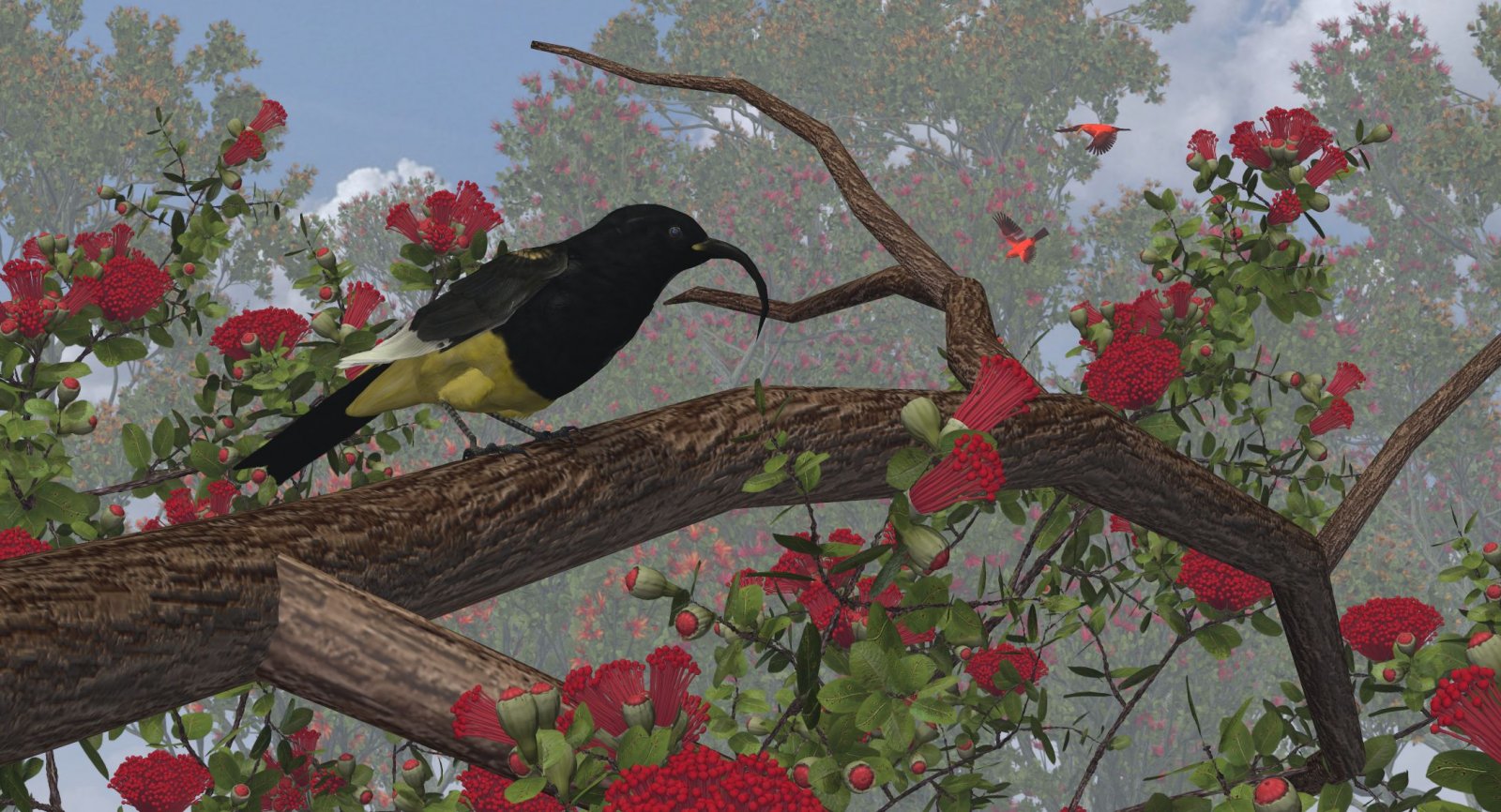 much better. There are some pitfalls, the closer you bring the "EndDist" the more sky will fade. To fix this, I've often made two renders and assembled them-- one without the skydome and saved as a .png (so the sky is Alpha) and then the skydome rendered as a separate background image without Atmosphere on.

The Mamo was one of the most honored birds in Hawaiian society. Its orange feathers were used to create capes and hats (featherwork) that were used by royalty. Feather collecting contributed to the bird's decline. The famous yellow cloak of Kamehameha I is estimated to have taken the reigns of eight monarchs and the golden feathers of 80,000 birds to complete.

It was heavily trapped by Hawaiians for their feathers, but it is more likely that habitat destruction and disease were the ultimate causes of the species’ extinction. European settlers changed the Mamo's habitat to support agriculture and cattle ranching, which damaged the bird's food source. The cattle roamed loose in the forests, destroying the understory ecosystem. Even though this was discovered early and was well known to the Hawaiians, the Mamo quickly disappeared.

Avian pox may have killed any birds that survived habitat destruction. There are many specimens of this bird in American and European museums. The bird seemed to disappear in 1899, but reports of this bird continued for a few more years. The last confirmed sighting was in July 1898 near Kaumana on the island of Hawaiʻi by a collector, Henry W. Henshaw, who, as mentioned by Tim Flannery in his book, A Gap In Nature, shot and wounded a bird he was stalking, before it escaped with another bird.
Last edited: Feb 1, 2016

HW Honey Bear
That's very helpful! I tried it, initially and my camera must have been outside the skydome.. I got sky VERY fuzzy and my moths fuzzy too...got frustrated...I'm much better with just assemble layers and post work... BUT this helps a lot! Thanks, Ken!

Contributing Artist
I had my first try at Atmosphere using SF Fiat Lux set.
Mostly for portrait type images but I like how you explain it here.
Now I can apply it on my own as soon as I feel up to experimenting.
So if you do not mind I will copy and paste to MS Word.

Contributing Artist
Thanks for the info Ken...

I bookmarked this! Thanks Ken!

Poser atmospherics are my nightmare, but this has been very helpful. Thanks a lot, Ken!