I started this over on the Renderosity Poser 11 forum in a thread entitled Subject: Cloth Room: Calculates okay, but when I play - nothing (because I last used the cloth room 4 years ago and forgot how it works). Once I'd resolved that stupid problem I decided to start a more appropriately titled thread over there - Subject: Creating a maypole using Poser 11's cloth room. But I can't post PZ3s or OBJs or even ZIPs over there, which I want to do as this goes on, on the unlikely off-chance that somebody else might want to play.

Rather than reposting everything I've done so far (not too much) I'd suggest that anybody who's interested reads those two threads. I'm simply going to continue from where I'd got to - testing the idea of using morph targets to get the dancers doing that widdershins and deasil weaving in and out type stuff, as mentioned in my latest post on the Renderosity thread...

Note: I'm not actually using the cloth room for the specific test in this post !

I'm just testing to see whether I can use a few carefully prepared morph targets to control the choreographed group, which will contain just the bottom few vertices of each streamer - i.e. where the dancers would hold them.

It works ! And here's a couple of Poser animations to prove it.
Note: the four little cones are completely independent objects - I'm using them to check whether the ends of the streamers are following the correct course. They are. The green and magenta are the deasil (clockwise) 'dancers', while the blue and white go widdershins (anti-clockwise)

Note2: Don't worry about the fact that the streamers billow and stretch here as that's just the result of the MTs. When I use the cloth room (next step, hopefully tomorrow) it's only the choreographed group, i.e. the bottom few vertices of each streamer, that will be affected by those morphs. The main lengths of the streamers are in the dynamic group and will be worked out by the cloth sim.


I've also attached a zip containing the PZ3 and PMD if anybody wants to play.
And also another zip with the OBJs for the maypole, the base 4-streamers, and the four morph targets

Just to remind myself how I set up the MTs. Here's a top view with A, B, C and D being the hand-held ends of the four ribbons. Dancers A and C go clockwise, B and D anti-clockwise. The 5 stages are shown left-to-right below, with the dancers positions at the fifth being identical to the starting position.
Assuming 30 frames per stage the left image is frame 1 (all MTs are zero). Second is frame 30 (MT1=1.0, others zero). Third is frame 60 (MT1=1, MT2=1, others zero). Etc.
Between frame 1 and frame 30 MT1 increases linearly from 0.0 to 1.0. Between frame 30 and frame 60 MT2 increases linearly from 0.0 to 1.0. Etc.
By frame 120 all four MTs are 1.0, which is exactly the same as if all four MTs were zero. 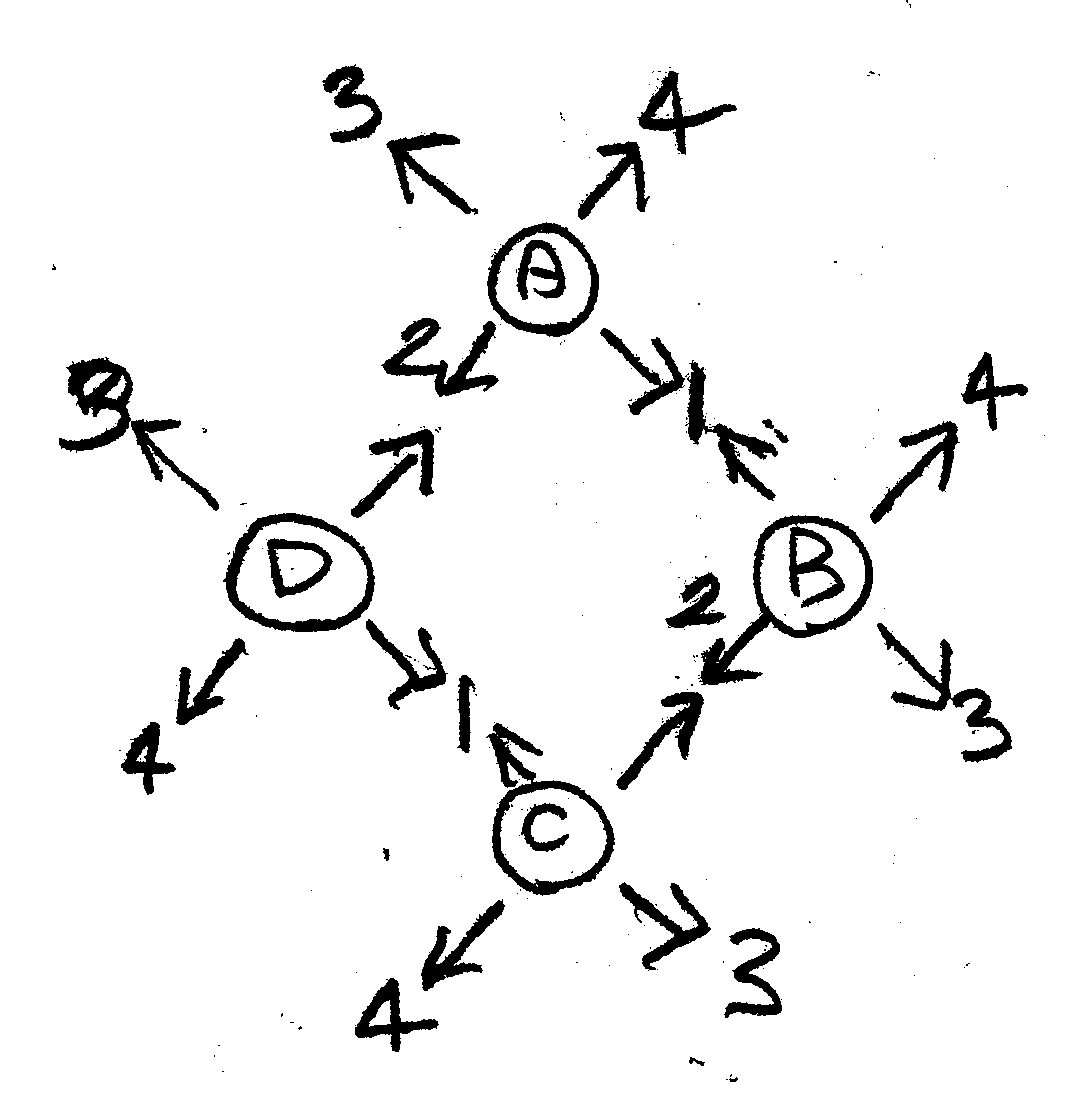 P.S. Over on the first Renderosity thread adp001 suggested that bullt physics would probably be a better approach for this...

Contributing Artist
Oh what a cool idea! I think you could model the top parts that are wrapping over and under. Unless you want to do this completely dynamically. Please let us know how this turns out.