Has anyone tried it yet?

Without changing any settings, it is pretty much a one-trick pony, but I was wondering if anyone else out there has given it a play, and used the pillows in their renders.

I grew my version to three panel buttons, so I gave it it's own tool tab. Still some work to do, and mostly the fluff work is done. Now, I just need to get in and code the meat-n-potatoes... 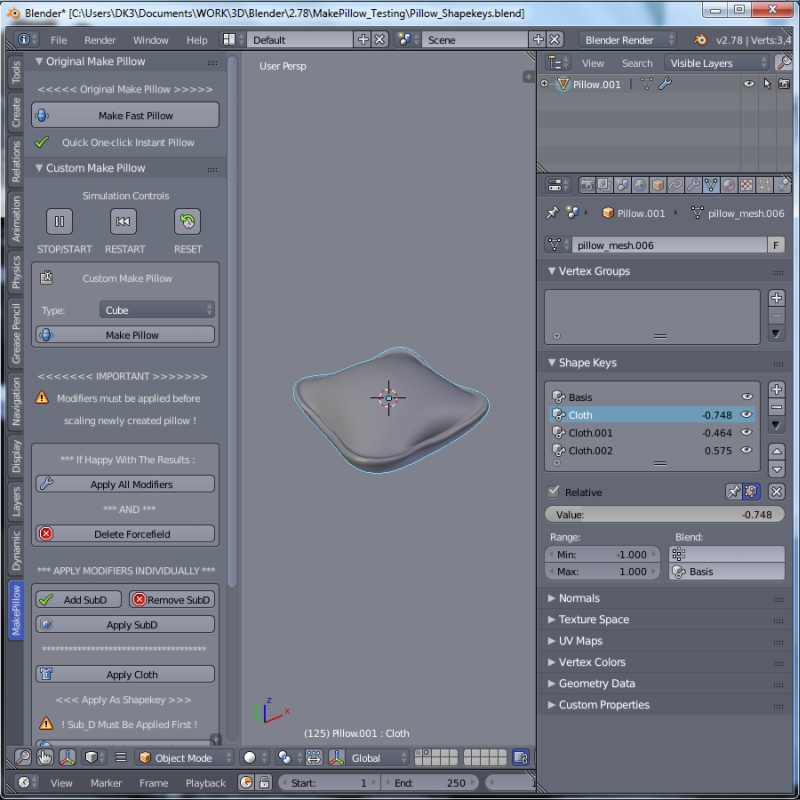 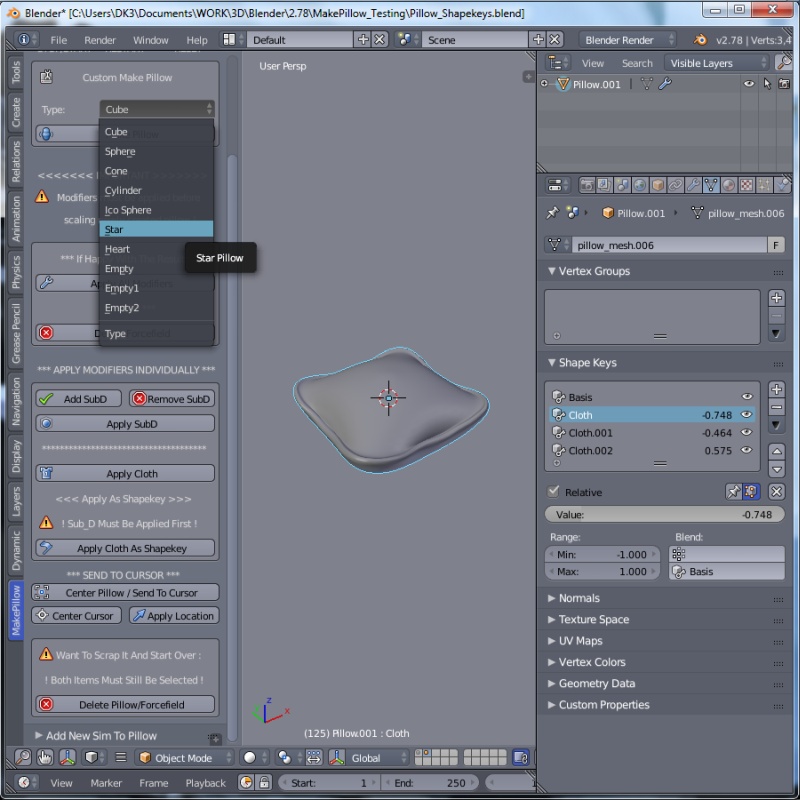 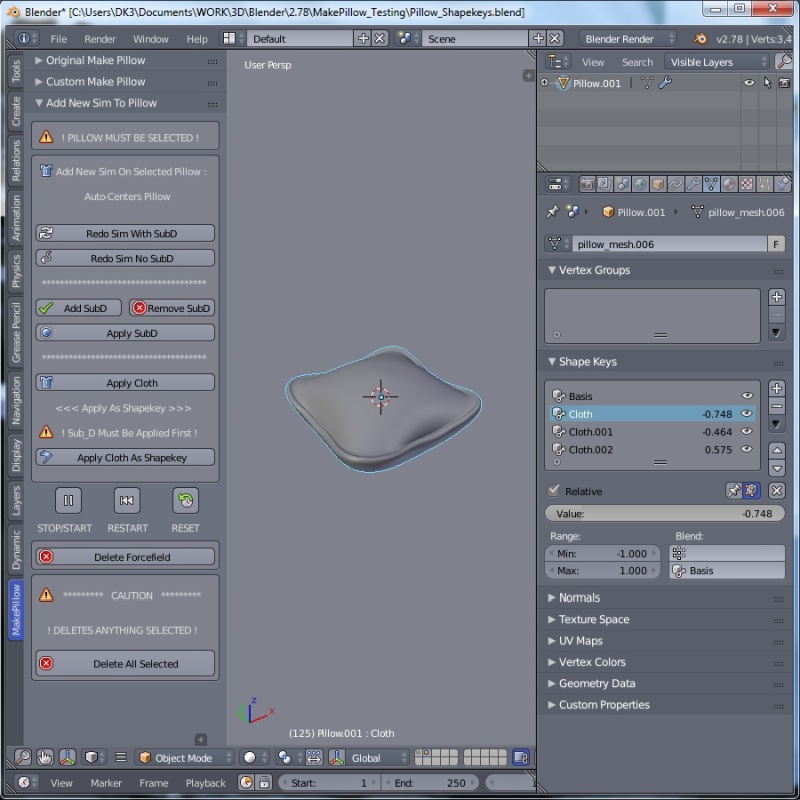 The pillow on the screen is result of quick play testing the shapekeys function. Further work can be achieved from this starting point.

CV-BEE
Oh if the underside of the pillow could be made to look the same, it'll look like a pillow with piping around it. Nice.

That is entirely possible. Just have to perform a couple of the shapekey sims utilizing the forcefield with negative attributes.

Also, divots can be created in the seating as well, and one step further is editing in edit mode with vertex groups to achieve per area changes with the shapekeys.

I think you missed the point...

Yes, it is easy to model a pillow, but someone coded an auto-pillow dynamic cloth simulation for your usage. It can be used as a starting point for much more.

I wanted more functionality out of it, and I don't care for using the spacebar usage, so I turned it into a Tools Tab Addon. I am going to add some more to it later, but for now it's a start. This really could be fleshed out to something very useful.

And, how are you liking Bforartists?

I think he is doing a good job with it so far, but I don't care for the keymap changes, and changing modules that are breaking Addons.
Click to expand...

Will you be releasing your update to this tool?

Thank you for your interest in my updated version. I haven't had much time to work on it further, and I am only a part-time coder. Well... more of a part-time hacker. My coding skills are equivalent to someone typing on a keyboard who has not taken a typing course, all hunt-n-peck, opposed to proper hand placement and typing. Luckily for me though, I took typing in High School thirty years ago, so I at least have those skills worked out.

It takes me four-times longer than a seasoned coder due to the huge trial-n-error workflow I employ to get things accomplished. This along with a lot of code study, both within the API, and others' code until I find the correct solutions. With that said, I usually only code for myself, as I have no plans to support addons with all the API changes that happen with each new version of Blender that continually break addons left and right.

However, I have been working on solidifying a simplified version for you (or anyone else interested) for now until I have time to get back to coding the bigger version (which is much more difficult to code all the things I want to implement). It is close to being completed, and when it is, I will add a link for you to download.

Just so there is an understanding. Anything I code for myself, I do not have to worry about error variables, or what might be in scene that can be corrupted by usage. But, for others, one has to clean up the code, fix error variables (ex. click on button without object in scene, accidental deletion, etc.), and work out usage paradigms before it is fit for consumption.

Even for the simplified version, I implemented things such as:

- Correcting original code ordering which led to faster simulation (along with removing unneeded collision data - which of there is none).
- Added auto-UV-ing, so the Pillow comes in auto-UV-ed.
- Added auto-naming at sim's start, as opposed to after simulation is complete.
- Changed Apply sim, and delete Forcefield to a one button operation.
- And, implemented smart deletion, where other objects (including empties) are protected from deletion even if they are selected along with the sim objects (as long as they are selected, but not "active" - still trying to work that out).

The last one is where I am currently trying to finalize, and have a working version to upload. I have been going round-n-round implementing, breaking previous code, fixing, breaking, fixing, etc., and I need to figure out how to get both the ApplySim/Delete Forcefield, and the Delete Pillow/Forcefield to play nice with each other as well as not affect anything else one might have in scene (bed, couch, object, empty, curve, etc.). I had the delete working last week where it would not affect anything else in scene, but as of right now, I somehow broke it again, and am currently trying to find the correct solution without breaking the sim apply/delete.

There is also one other issue with addon activation/deactivation with B2.79 which is a known issue due to API changes that they only tested against current addons that are available, and have deemed it solved in official release. But, my addon shows it is not solved, and will probably be problematic for any future addons. It has to do with internal RNA coding now conflicting every addon's class namings. It will throw a bl_rna error, and possibly not deactivate, but I have found a work-around is to use the addon (create a Pillow), and that somehow registers the classes correctly from others with same named classes, and then activate/deactivate works properly. Blender... go figure...

So, yeah. Going back through the code, I found the issue with select/delete due to adding a Select Pillow Sim button to re-select the sim if you lost your way. And, because the delete function is being utilized by two classes, and there are three selection methods used, I was getting conflicts that were not there before adding the last button class.

I thought it was necessary to have the re-select button for the other two buttons, but I already had the code in place (with some minor tweaks) to have both apply/delete, and smart delete working on both a selected, or un-selected sim group.

And, since a picture is worth one-thousand words. An animated GIF is worth ten-thousand...

* If you have anything selected in scene - they will be deselected:

* Reset with deselection Apply Sim example (Deselection needs fixing, and just noticed there is an issue with the Metaball field I also need to fix). Works even when Pillow Sim is not selected:

And, here are the last of the examples...

* Small example of the Send to Cursor functions (original implementation for pillow drift from forcefield):

* Last, showing the addon is mode contextual - only available in Object Mode (as it should be):

There is still some more fixes to work on, and it only works with Layer 1 for now (I will fix it to work on any layer needed).

Any questions, comments, concerns, critiques, requests? All are welcome...

Okay, here is the simplified toolshelf addon for anyone who wants to try it out...

NOTE: Link removed per DaremoK3's request (see his post below).
(don't know how to change the link name, but link is to actual download page - file is ZIP / Name: MakePillowToolshelf-0.3)

A few things; First, I added back in the select/re-select button which should be used to apply the sim/delete forcefield if it somehow becomes deselected. The whole process is contextual (works on Pillow Sim only, not after completion), and in trying to foresee what someone might have in scene when using the addon. Best practice is to create pillow in empty scene, or on a different layer (any layer works now).

Apply/Delete still works if absolutely nothing in scene is selected, and no matter what, Pillow becomes the "active" selection. I added error canceling if any other objects in scene are selected (telling you that you need to select Pillow/Forcefield - use the quick button), but there is one error exception I have yet to solve (reintroduced in this version), and that is "active" Forcefields, Empties, or Metaballs. Do not have any of these (if you have them in scene) selected when you apply the pillow sim as they can be deleted with the pillow's forcefield.

Also, the Reset Sim button no longer deselects the pillow sim if currently selected, and will be re-selected if nothing in scene is selected. Having anything else in scene will cause pillow sim to deselect, but sim still works, and easily re-selected with quick re-select button.

I also added a preferences setting that the official devs are adding to addons. The instant change Tab parameter. This allows you to put the tool under any Tab you like (including it's own Tab). You just type in a Tab's name in the parameter box, and press enter - instant change. Default is the Tools Tab.

Please, do not download from the link in the post above. It seems that the hosting site is now being reported to be unsafe, so the download has probably been compromised.

* EDIT: I have flagged the post above to the admins in hopes that they will disable the link...

CV-BEE
I can do that for you, but do you want the link changed to plain text, or just deleted altogether?