Help my Poser Pro 14 has no Library!

Yesterday I used PP14 without a problem. When I opened it today there was no Library, instead it looked like this:

I closed the "Library" & reopened it, but it still looked like the above. Does anyone know what this is about?

Here's a little background, in case it helps- Back in the beginning of September I started having trouble with my computer. (Very similar to the problems that skylab described having on Page 619 of SKYLAB CHAT - on November 11th 2020 ). My computer was in the shop, off & on, for two months! When the shop was unable to find what was causing the problems I mentioned that I had heard Windows 10 Pro sometimes effected art programs. The owner denied that was possible. When I got my computer back I found out that the OS that was installed, without my permission, was windows 10 Pro "Insider"! For those who don't know what that means it's a version of Windows that is used by people who beta test the upcoming version of the next OS. Since I hadn't expected anything like that, I unfortunately didn't discover it until I had all my programs installed & everything loaded again. Now I wonder if my Poser has been killed by Windows?

I am wondering if reinstalling Poser would resolve this issue or makes things worse?

PS- I did a deep scan of my computer & there was no Malware.

Does anyone have any information/suggestions?

Staff member
QAV-BEE
Moved this to the Poser forum.

CV-BEE
Contributing Artist
I checked my Poser Pro 2014 and have the same results as you. No library and the flash missing icon.

I suspect it has been caused because Adobe finally shut down Flash a few days ago.

QAV-BEE
Contributing Artist
Strike this, I thought you said Poser 12, otherwise it likely is the flash shutdown that's done it to you.

That doesn't sound good! But what do we do now? I prefer PP14. I do appreciate the info Satira. It is good to know what happened?

Hi Flint I posted the solution on the page below, hope it works for you

CV-BEE
Contributing Artist
I found some additional information on the cause.

Adobe to Start Blocking Flash Content from Playing from January 12, 2021


Adobe has released the final scheduled update for its Flash Player and announced that it would start blocking Flash content from running on January 12, 2021. The company has also recommended that users uninstall Flash Player before it reaches its end of support on December 31. The new update comes months after Microsoft announced that it would be ending support for Adobe Flash Player on Microsoft Edge and Internet Explorer by the end of 2020. Alongside Microsoft's browsers, Google Chrome and Mozilla Firefox are also set to say goodbye to Adobe Flash Player, which was once a popular solution to run multimedia content on the Web.​
​
I was about to post how to change to the External Library, but skylab has just done so. Checking that process and will report how it worked for me.

CV-BEE
Contributing Artist
I had already changed to the External Library, which required accepting Air. I'm now being prompted to update Air. But, I am reluctant to do so right now.

After changing the setting to External Library, I closed and reopened Poser Pro 2014 as instructed.
Poser opened, and no library, although Libraries was checked under Windows.
I closed Poser again and reopened. This time Libraries was no longer checked.

I then read skylab's post and instructions, but had already done those steps.

I then again closed Poser and reopened. This time I checked Libraries, and was again prompted to update Air. I declined and after a few minutes, a new window opened with the Library. 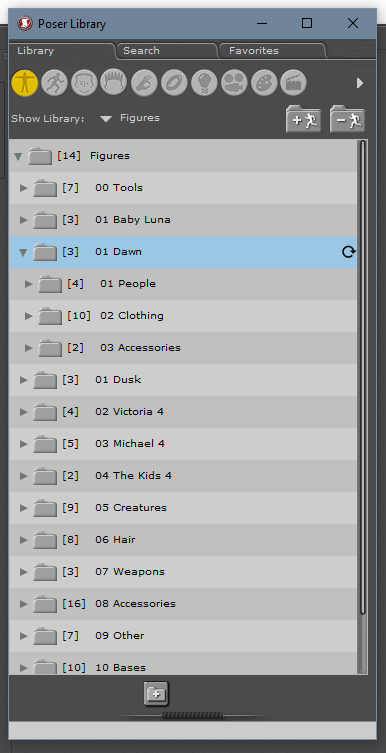 It's a bit more cumbersome than having a docked window, but it works.

Yeah, I always accept the Air prompt when I install the older versions of Poser....but as soon as I saw the flash symbol, I knew exactly what had happened. When Poser 8 (Poser Pro 2010) was first released, a lot of folks had trouble with the content library not showing...so we had to use Dimension3D's XL Content Library until the flash bug was fixed. Hope everyone gets Poser up and running

That's a big help skylab & Satira! I will be trying it out in the morning, when my brain is clearer!

CV-BEE
I didn't think an External Library was something that could be done prior to P11. I've been using the External Library option since getting P11, and I like using it to view the Libraries with my Browser.

On my last laptop, I had the problem with my old Poser 9 installation, but was lucky enough to have purchased ShaderWorks Library Manager 2 before RDNA closed their doors, so was able to get my Poser 9 Libraries working from within Poser 9.

QAV-BEE
Contributing Artist
I never could get Library Manager 2 working right. Probably the loose nut behind my keyboard.

CV-BEE
Contributing Artist
Since the oldest version I have installed is Poser Pro 2014, I can't check the Poser.ini for Poser Pro 2012. But, the External Library was apparently also available as early as Poser Pro 2012.

Perhaps it was only available in the Pro versions of Poser

Contributing Artist
This is a great example of why I had serious issues with SM making critical program features heavily dependent on third party technologies as they did. The Library in particular has been a nightmare to many users since the adoption of reliance on flash and air.

Yes, Satira, that's correct...the external library was only an option in the Pro versions....so Poser 8, 9 and probably 10 will have no functioning library now, so one would have to use Dimension3D's XL Content Library (I've used this before, works fine), or perhaps Library Manager 2 (I've never tried it). I was also concerned when SM switched to a flash-based content library. During the release of Poser 8, I posted this disappointed Andy animation to demonstrate on the forum at the time what was happening...and now this will be the appearance of Poser 8, 9 and 10 and will require some sort of outside library manager in order to function at all.

skylab said:
Yes, Satira, that's correct...the external library was only an option in the Pro versions.
Click to expand...

Thanks for confirming that Sky. I know my P7 and P9 didn't have it, and I jumped from 9 to PP11 when it first came out, so didn't realize it was only the non-Pro versions that didn't have any kind of External Library.
P

Ted (BB) Crozer was hired to code a new library. Time crunch and lack of investment in Poser by the owners at that time forced him to use Flash as the library base. Air was coded into the Pro version. The Flash\Air switch has always been there but is of no use if you don't have the Pro version. Like the Python update, times change and software goes out of date. It should be possible to simply use a web browser as a library interface in PP2014 but I no longer have anything that old either in hardware or software in order to check. Flash was banned, for security reasons; from my equipment years ago.

HW3D Exclusive Artist
I use the Pro version of 14 with no problem (and the external library setting on). When the library, I get an annoying "invalid cerificate" message and click that I don't want to proceed. What it is trying to do is trying to connect to the no longer existent Content Paradise store.

I should note that have Poser 12. The reason I still have Poser Pro 2014 is because that exports to DS the best-- Poser 11/12 have a lot of code DS hates.