And just when I thought I ran out of ideas for useful scripts, the Python muse paid me another visit!

This is a Python script tool to automate the posing of long bone chains items that ship with no posing dials. Examples are whips, tails, ropes, chains, and tentacles. 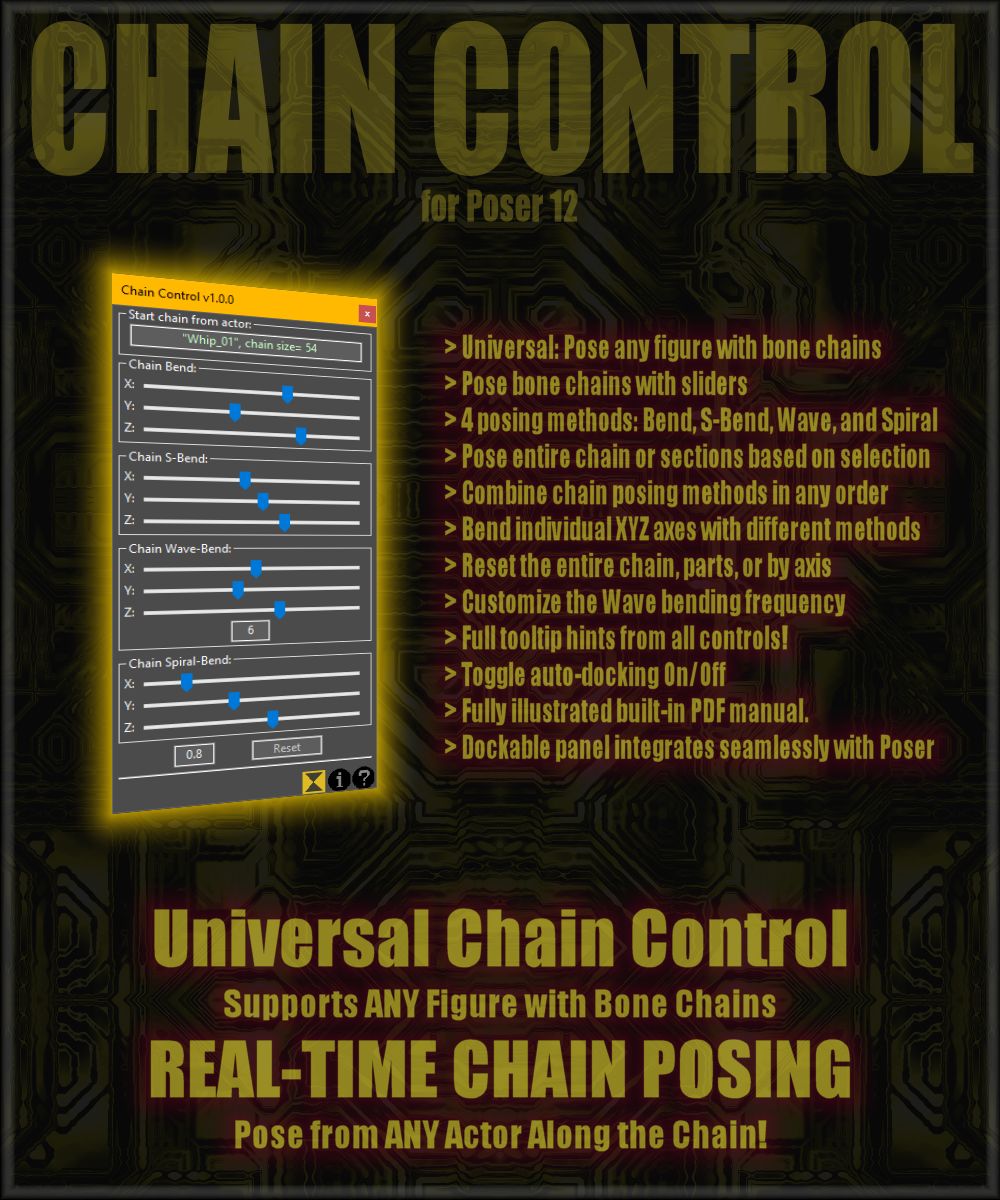 How many of such items with long bone chains do you have in your library that you have never used because they have no posing dials, where manually posing long bone chains is quite discouraging? This script came to resolve that by offering a simple universal tool that can pose just about anything that has a bone chain! 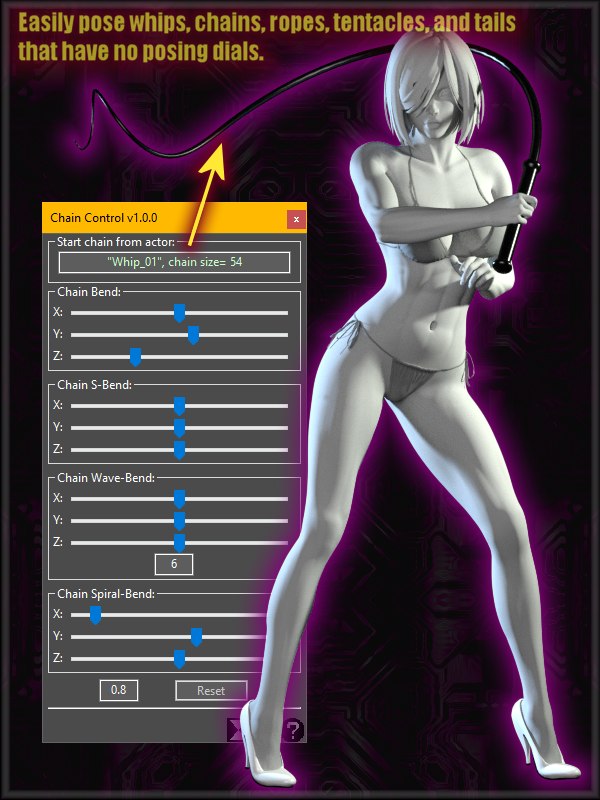 Not only pose items that have long bone chains, but you can also mix & match it in 4 separate bending styles in any order you like: Bend, S-Bend, Wave, and Spiral! In the examples below I am using them in only 1 single axis, so you can see their effect individually. For the 2 whips on the right, I have mixed them a bit to show some variety. 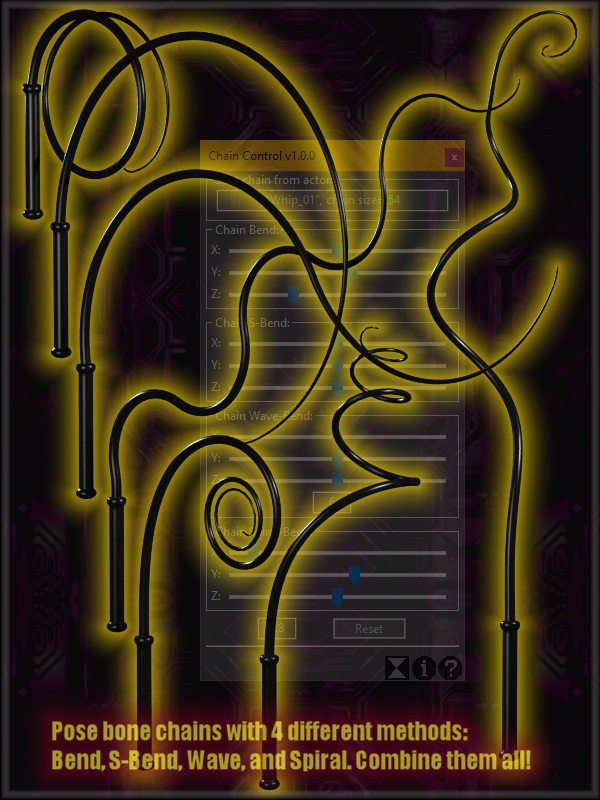 But just posing chains with that much power is not enough - you also can start from any point you like. In the example below, I pick from where I want to start from, and pose the bone chain from there on (right side). On the left side, I have posed the entire chain, and then picked the whip's last third section to give it a spiral curl. This way we can keep editing specific parts to get where we want. 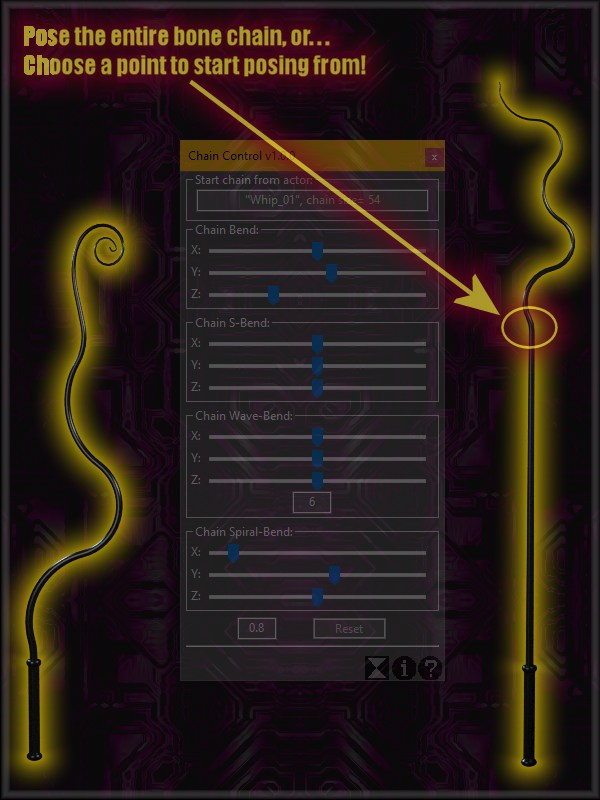 So back to the bone chain items you have in your library that you have never used because it has no posing dials, and doing it by hand is discouraging - I have this rope from Mochi I have never used before. I could curl it up by just pushing 2 dials from the regular "Chain Bend" section. It literally takes as long as it takes to move the 2 sliders to get the result you see below. 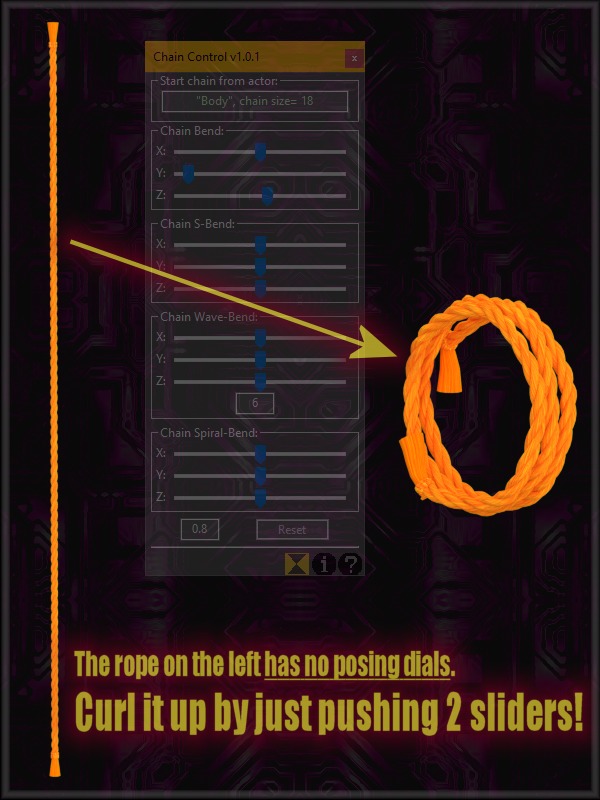 What about tails? Same applies! This tail in particular is a separate item, but it would work all the same if it were part of the figure. 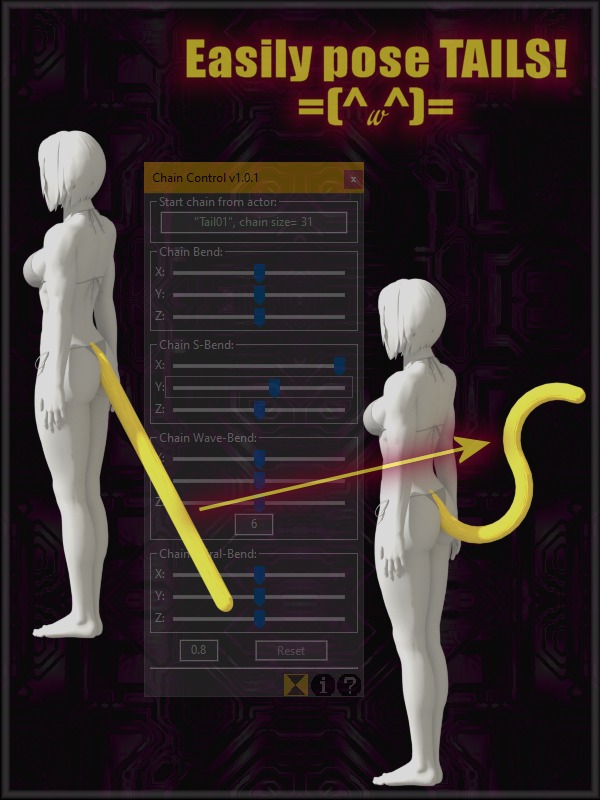 But moving sliders is so much fun. I have started playing with the sliders, using different bending methods, and choosing different parts to start from, and quickly got it just the way I wanted, as seen below. Now how long would it take to do this BY HAND?? Did I mention pushing sliders is FUN? 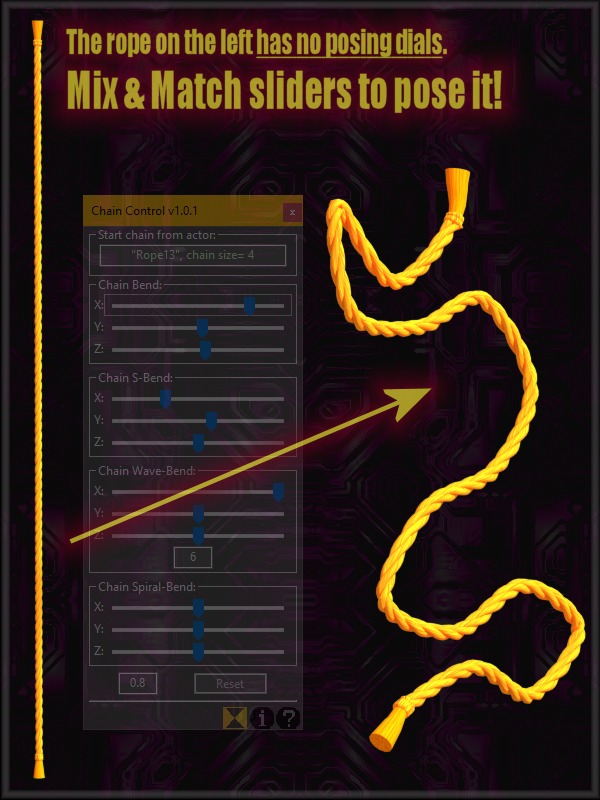 The basic idea is to choose a point in the bone chain to start bending from, and all parts below it in the hierarchy will be affected. All rigging methods are supported, be it legacy spheres, traditional joint order, curve joint order, or modern weight mapped. This tool is 100% universal, meaning it can pose anything that has a bone chain, even if it's part of another figure, like a figure's tail.

It's very simple and FUN to use, and I had to brush up my rusty linear algebra to be able to make it work with all the bells & whistles. After the initial week of blood & tears, I have finally figured out the right math formulas, and then optimized everything to work in real-time. This is VERY different from what we do when we spin dials in Poser. It's like simulating ERCs over long bone chains without any dials! The goal here was to get something complicated and make it look simple when you use it.

The functionality was inspired by "EasyPose Underground", which creates dials to bend bone chains from the root, or any point in the middle. Many of my store products that have bone chains were rigged with EasyPose dials. HOWEVER, there is a large amount of other contents that have ZERO posing dials, and this is what I have created this tool for. It emulates EasyPose dials on items that don't have them - in real-time, without having to rig them again.

It offers the same basic functionality, to include all 4 types of bending - but it goes a step beyond: the Wave bend can be customized by choosing its frequency, so you can vary its effect at any time if you want to. In EasyPose, the Wave frequency is hardcoded into the dials. On Spiral bends, EasyPose uses a fixed list of angles, while this script pre-calculates them in real-time base on what is being bent, offering more precision and versatility.

The tool is now in final beta-testing phase, and will soon go to my store at Renderosity.
Last edited: Nov 21, 2021

CV-BEE
This sounds very interesting. Would this work with a hair prop (or character) that has a very, very long braided ponytail? The hair product I'm thinking of does, IIRC, have morphs, but I often don't see it do the kind of things you promos are showing/describing.

Miss B said:
This sounds very interesting. Would this work with a hair prop (or character) that has a very, very long braided ponytail? The hair product I'm thinking of does, IIRC, have morphs, but I often don't see it do the kind of things you promos are showing/describing.
Click to expand...

Like EasyPose Underground, this is for posing chains of bones. Props have no bones, so this is for figures only. Which bone chains would pose well with this script would depend on how they were rigged - if it has a bone chain, that's a good start. If it has enough bones in the chain to pose smoothly, that's another good sign. The HW horse mane has plenty of bone chains, but they already have posing dials dedicated just for them, already offering posing every part of the mane in different styles.

I would use this script on the opposite cases where we have a figure with bone chains, but no posing dials. Or also when there are dials, but they don't provide the kind of posing I want. The idea is making poses with things that were previously unposable.

CV-BEE
OK, I'll have to check the hair, as I'm pretty sure it's a character/figure hair, and not prop hair.

I could pose the hair I'm thinking of, I just wasn't always satisfied with the pose dials provided.

Contributing Artist
If the hair has a bone chain, the script can pose it. Do you know how many bones are in the chain?

CV-BEE
I just got it off my external hard drive, as I haven't used it since I got this laptop just 2 years ago. I'll install tomorrow, and check it out.

Contributing Artist
Good news! Chain Control for Poser 12 has been approved and is now live at Renderosity! You can get it HERE. I will make a demonstration video soon. ^___^ 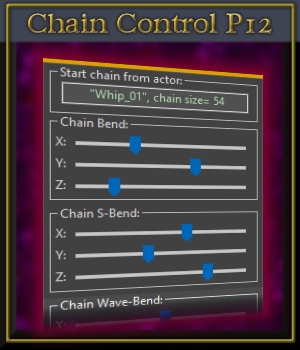 Contributing Artist
Took me a while, but I have finally made the demonstration video for Chain Control. I explain all the controls, and pose a whip and a rope to illustrate what we can do with the tool. So here it is: